MeMeTales, a super-cute (and guilt-free!) children’s books application arrives on Android today, following its iOS release and public debut at 500 Startups’ demo day last October. Originally from Seattle, now a San Francisco-based operation, the company was founded by husband and wife team Maya Bisineer and Pree Kolari, and offers a library of picture books designed for preschool and elementary-aged kids and their parents.

Through partnerships with publishers like PBSKids, HarperCollins, Little Pickle Press, Shen’s Books and others, the platform includes access to a variety of quality books to choose from, but unlike other e-book libraries for kids, it also “gamifies” the experience for the young readers.

In MeMeTales, kids earn points and stickers for reading books and get to unlock book-related games, when available. Parents are kept in the loop and notified of their child’s progress, as the kid racks up the rewards, too. For publishers, MeMeTales is also offering an online publishing platform that allows them to share their books with the MeMeTales community.

Since its launch, founder Maya Bisineer tells us that MeMeTales has reached 81,000 app downloads, 37,000 registered users, and has seen nearly 400,000 complete book reads through the app. They also saw an average of 1,800 complete book reads per day in the past week. Plus, says Bisineer, over 20% of the app’s users return the app daily. All good metrics for a relatively new, education-focused app. 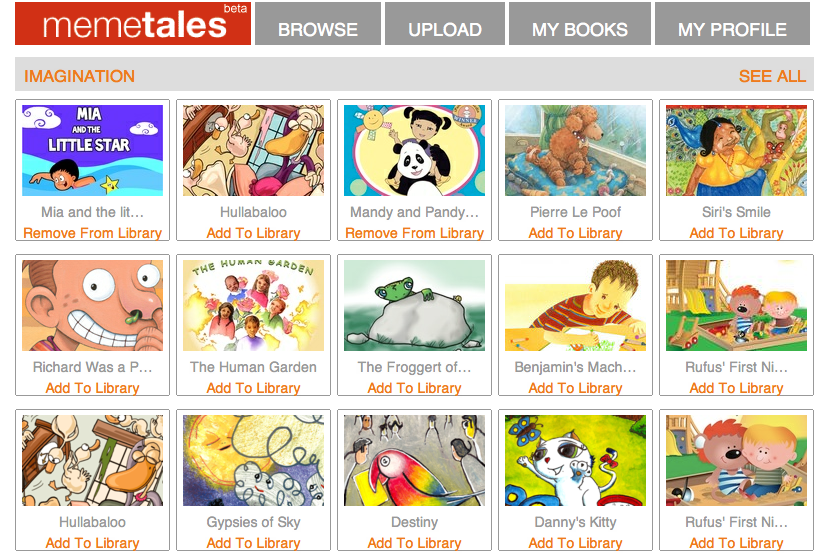 Becoming a connoisseur of these type of apps myself, I enjoy the stories and illustrations in MeMeTales quite a bit, but the actual reading experience still needs a little work. The nav bar remains when reading, font choice is kind of boring, and sometimes the font overlays the picture (on iPhone, that is – it looks better on iPad). I love the more immersive feel of something like Farfaria, for example. But MeMeTales is young and improving.

Alongside the Android launch, the company is updating its iOS app as well, and is partnering with PBSKids and several children’s publishers on Readathon 2012, a special summer reading initiative. The company will be giving kids access to free books and learning materials from its publishing partners every week for six weeks during the summer. (Normally, MeMeTales sells the books it offers, after the first 20 which are free at sign-up).

“We are big believers that technology, combined with community can push the envelope on making a real difference. We really hope we can inspire other app developers to look beyond being ‘just an app,'” says Bisineer. “We have built technology that makes it possible for publishers to let kids ‘borrow’ their books for free via the app and website during the Readathon,” she explains, describing how the summer reading program works. “At the end of the week, the books go right back into the store for people to purchase,”

In addition, for every child who joins the Readathon, MeMeTales is donating a meal to a hungry child via FoodForEducation.org. (They’ve reached 1,256 meals donated so far.) The goal is to donate 10,000 meals if they reach 10,000 readers or 100,000 book reads. The Readathon curriculum has also been integrated into several existing preschools, summer camps and weekly Mommy and Me Storytimes across the U.S., says Bisineer.

The company raised $100,000 from 500 Startups and others last year, and is looking to raise another round in the upcoming months. Bisineer says they have a couple of investors committed, but nothing they can announce publicly at this time. You download the mobile app here on iOS or the newly launched Android app here.