In an attempt to improve email address privacy, Facebook has screwed up big time in what seems like a self-serving attempt to increase usage of @facebook.com email addresses that direct to your Facebook Messages Inbox.

Now everyone’s personal email addresses have been hidden from their profiles, regardless of previously selected privacy settings. Instead, your @facebook.com contact info is the only one visible to people with permission to see your email addresses. This makes it harder for friends to contact you via third-party email unless you reset your controls.

I think Facebook should seriously consider a rollback or at least some strong notification of the changes so that 900 million people don’t suddenly find their email addresses more closed and disconnected.

But this setting is redundant since you could already set the privacy of each of their email addresses to any category, list, or specific person they wanted. Had it defaulted to all addresses be shown on Timeline to the same people that could see them before, everything would have been fine. Unfortunately, Facebook erred too far on the side of privacy, locking down the visibility of personal addresses by defaulting them to “hidden”.

In November 2010 Facebook announced its unified messaging product that lets you view Messages, Chats, and emails sent to new @facebook.com address all from the Messages inbox. Facebook let you sign up for a vanity email address then, and started notifying people it was assigning generic ones to everyone in April. Now that rollout has completed, so Facebook wanted to give people more control over the visibility of all their addresses so they added “shown” or “hidden from Timeline” controls to each listed email address.

Since anyone could already Facebook Message you via a button on your profile, Facebook probably figured it would be ok to default @facebook.com addresses to direct to the Messages inbox as “shown” on Timeline. The repercussion has been that people think Facebook is deviously trying to boost awareness of its proprietary email addresses that I never hear of anyone using. 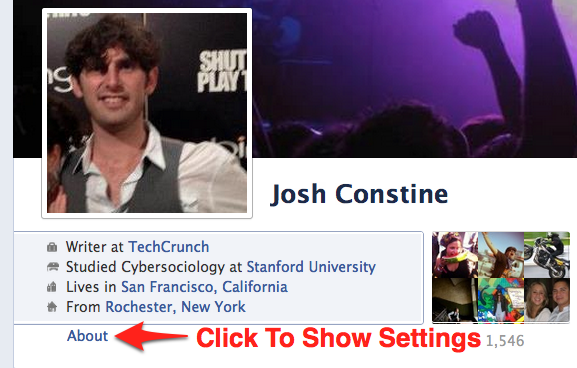 To undo the damage and revert back to the email address visibility you had before, visit your profile and click the “About” link on the right side below your cover. Then in the bottom right click “Edit” in the Contact Info section, and in the top right toggle “Hidden from Timeline” to “Shown on Timeline” for all your personal email addresses (and hide your @facebook.com address if you don’t want emails coming to your Messages inbox).

As before, you can also set the privacy control for each address for whomever you’d like to see it, such as setting a personal address visible only to friends, but a work address visible to friends of friends or public. Those haven’t changed are the master controls, so if Facebook had defaulted personal email addresses to “shown”, no one new would be able to see your addresses.

The fact is that millions of people might expect their friends to be able to grab their Gmail or other personal email address from their profile, because well, that’s how they set it up. It’s irresponsible of Facebook to modify these settings without telling people.

With so much backlash and claims of this being self-serving, I wouldn’t be surprised if it made some change, possibly defaulting all email addresses to “shown” for people who haven’t touched the new controls so that their existing privacy settings continue to dictate who can see each email address.

Maybe if you were sending an email to 10 friends but didn’t have two of their personal email addresses you could CC their @facebook.com addresses and it would be useful. And maybe this really was just an attempt to give users more privacy. But if I purposefully make something visible to friends, I don’t want it to suddenly disappear without warning.

The site should add a tooltip highlighting the changes and explaining how to revert them, or it should rollback the change immediately. Today Facebook learns that more privacy isn’t always better.