Not all social network connections are created equal. My networks on Facebook and LinkedIn certainly include plenty of real friends and colleagues, but they’re mixed in with people I met once at a conference, random folks who sent me a nice note about my writing, and so on. All of that (I hope) is pretty normal, but if I need to find the meaningful messages and connections, well, it can be a headache.

That’s the problem being tackled by a new startup called Cloze. Co-founders Dan Foody (CEO) and Alex Coté (CMO) say they’ve both faced this issue in previous jobs. As Foody put it, “We’ve both lived outside the four walls of our company for years,” because they’ve had sales or business development roles requiring them to work constantly with people outside their company. In those jobs, your personal network is everything, but Foody says they had become “information rich and information poor at the same time,” — so for example, if they wanted an introduction to someone, they could usually find 10 or 20 of their own connections on LinkedIn who supposedly knew the person they wanted to meet. The only problem was figuring whether these connections really knew the person in question.

To solve that problem, Cloze connects with your email address and your social network accounts, then it assigns each of your relationships a score of between 0 and 100. Foody says the score looks at a number of factors in a relationship — the frequency of communication, the length of the messages, the average response time, and the balance, i.e., whether someone always sends you 10-page manifestos and you always respond with nothing more than a yes or a no.

Having that score allows Cloze to do two main things, Foody says. First, it can help users prioritize their own interactions, by showing you messages you may have missed from people who are probably important to you, as indicated by a high Cloze relationship score. There are lots of other tools that try to sort through your email, and I live and die by Gmail’s Priority Inbox, but with the flood of stuff coming in, I still occasionally miss emails from my editors or from important sources.

You can also start connecting with other people on Cloze, and once you do, you can see their relationship scores with everyone in their network, and they can see yours. So when you need an introduction to someone, you should get more than just a list of people who are connected to them — each of those connections should come with a score. If someone’s relationship has a low score, their introduction may not be particularly valuable. Conversely, if they have an 85 or 90, you can feel pretty confident that they’ll carry some weight.

Cloze has raised $1.2 million in seed funding from Greylock Partners, Kepha Partners, and NextView Ventures. It’s based in the Polaris Ventures’ Dogpatch Labs office in Cambridge. 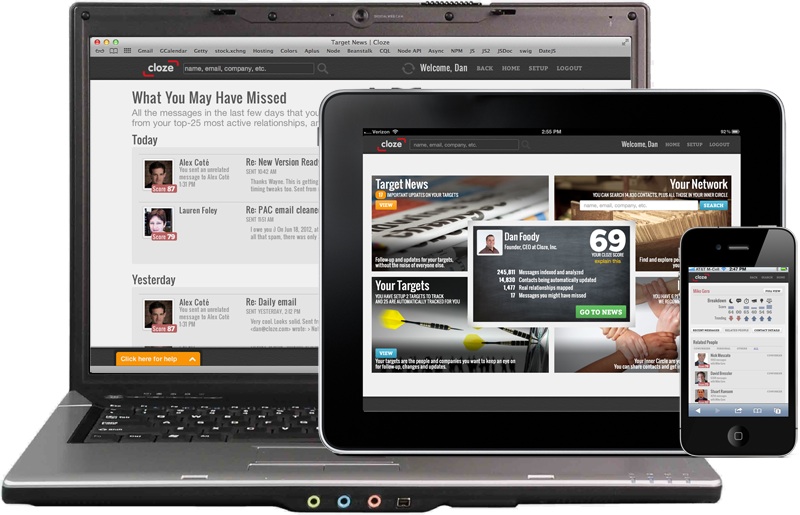