Facebook has created a new feature that lets users find friends and potential friends nearby.  Initially called “Friendshake” and also accessible through a URL that is the abbreviation of “find friends nearby” (http://fb.com/ffn), it’s another step in Facebook furthering its reach into mobile, and creating services to meet new people — rather than building up more connectivity with the ones you already know. And, in keeping with Facebook’s emphasis on being as ubiquitous as possible, for now it’s not being delivered in a native app, but via the mobile web. Update: it’s accessible via Facebook’s mobile apps, too (see below the break for more details, including comments from the developer).

The service comes a little under two months after Facebook announced the acquisition of Glancee, a mobile app that helps users discover people near them with similar interests, whose three founders have now joined Facebook and closed down their app. It is not clear if Friendshake has been created out of that acquisition, or if it has been developed along an altogether different thread — or how the functions of the two may eventually dovetail.

[Update: Facebook has pulled the feature! Our story on that here. More on the service below.]

We first heard about the service from developer Roger Pincombe, who himself got the info from a Facebook developer at the Angelhack event going on this weekend: Facebook is a title sponsor, and at the San Francisco event (Angelhack’s taking place also in Seattle, Boston and NYC), and one of its engineers was on site showing off how the app worked with developers. The feature has not been officially launched, but it is live and visible for those seeking it out. 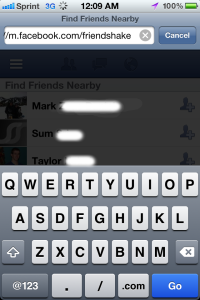 “He specifically said I should tell other people about it,” he told me in an email. “I (semi-jokingly) asked ‘even TechCrunch?’ and he said sure.” So here we are.

For now, the app works like this. Users have to be logged into Facebook and also into the Friendshake URL, and then others who are near can pick each other up. You can see both your own friends, as well as those you may not know.

For now it looks like the main purpose is to quickly add people who you meet at a specific event — like a hackathon, or a bar.

As Pincombe points out, “Before, you would need to tell them your name, probably spell it for them, and then depending on how common your name is, you’d have to tell them which of the results is actually you.  This makes it 2 taps if you save a bookmark.”

Update: Since publishing, the original FB engineer, Ryan Patterson, responded in the comments below, confirming what we’ve written here (original post follows after his quote):

I built Find Friends Nearby with another engineer for a hackathon project. While it was originally called ‘Friendshake’, we settled on ‘Find Friends Nearby’ for launch (the URL was a little bit of a homage to the previous iteration).

For me, the ideal use case for this product is the one where when you’re out with a group of people whom you’ve recently met and want to stay in contact with. Facebook search might be effective, or sharing your vanity addresses or business cards, but this tool provides a really easy way to exchange contact information with multiple people with minimal friction.

And there is, of course, the potential of how this basic service could be further developed: finding people who are friends of friends, or who have flagged similar interests in their social graphs; and it potentially could be something to incorporate as a push service, rather than one you have to be activate to use every time.

All of these features could make Friendshake into a Highlight killer — which can already do all of the above — and a lot more like Glancee, too.

But as with so many of these kinds of features, you have to wonder how and if it will be abused — random people you would like to shake off suddenly start asking you to friend them on Facebook, for example.

However, it appears that, even if Friendshake is already publicly available, this is still a work in progress being tested out, and so we may see more controls getting put in place, in addition to the fact that you have to activate the service to use it. “To my knowledge, the few people here at AngelHack that the Facebook employee tested it with are the only people to know about it yet,” said Pincombe.

Before this, Facebook already had an ambient location feature, but it worked somewhat less in real time, and it is more about friends you have rather than making new ones. Facebook’s Check-In feature, when enabled, lets users see contacts who have visited the same places they have, or who has checked-in to a Facebook event.

Update: Just as I was publishing this article, I noticed two people appear on my own Friendshake feed. How did they find out about the app, I wondered, and would they respond to my friend requests? I’ve contacted them, and Facebook, to try to find out more and will update as I learn it.

Update 2: It looks like the Find Friends Nearby option is now available on Facebook’s iOS and Android apps, too. It’s here: menu > apps > find friends > other tools > Find Friends Nearby, which takes you to a page that looks exactly like the mobile web page.