ThisLife quietly launched in 2010 as a cloud-based platform for storing and organizing all of a family’s photos in a single place. But after two years of working to refine the service, husband-and-wife team Matt and Andrea Johnson are just about ready to open it up to the public, and have raised a seed round of $2.75 million to do so.

ThisLife is built on the idea of having a single place to store and organize your photos. Not happy with current public photo-sharing offerings (the Facebooks and Flickrs of the world) or the photo capabilities of cloud storage services like Dropbox, the Johnsons set out to build a better environment to keep all their family memories.

The site itself is pretty visually stunning — you pretty much have to see it for yourself — but the real beauty is in what ThisLife has built behind the scenes to allow users to organize and search photos based on the people in them, where they were taken, and what those people are doing. To start, users can upload photos from their PCs, but they can also import photos they’ve already uploaded online from a number of different online services, including Facebook, Flickr, and Instagram. ThisLife then organizes those photos into a library and allows users to create a timeline out of their favorites, as well as combine duplicates that might appear from various places.

Once photos are uploaded, ThisLife has a very robust facial recognition technology to identify people in various photos. That’s critical for families using the service. CEO Andrea Johnson told me that one of the most difficult problems for that technology is differentiating between young siblings, not to mention adapting to changes as children grow older. In a demo, for instance, she showed a timeline of one of her kids from eight weeks to eight years old. 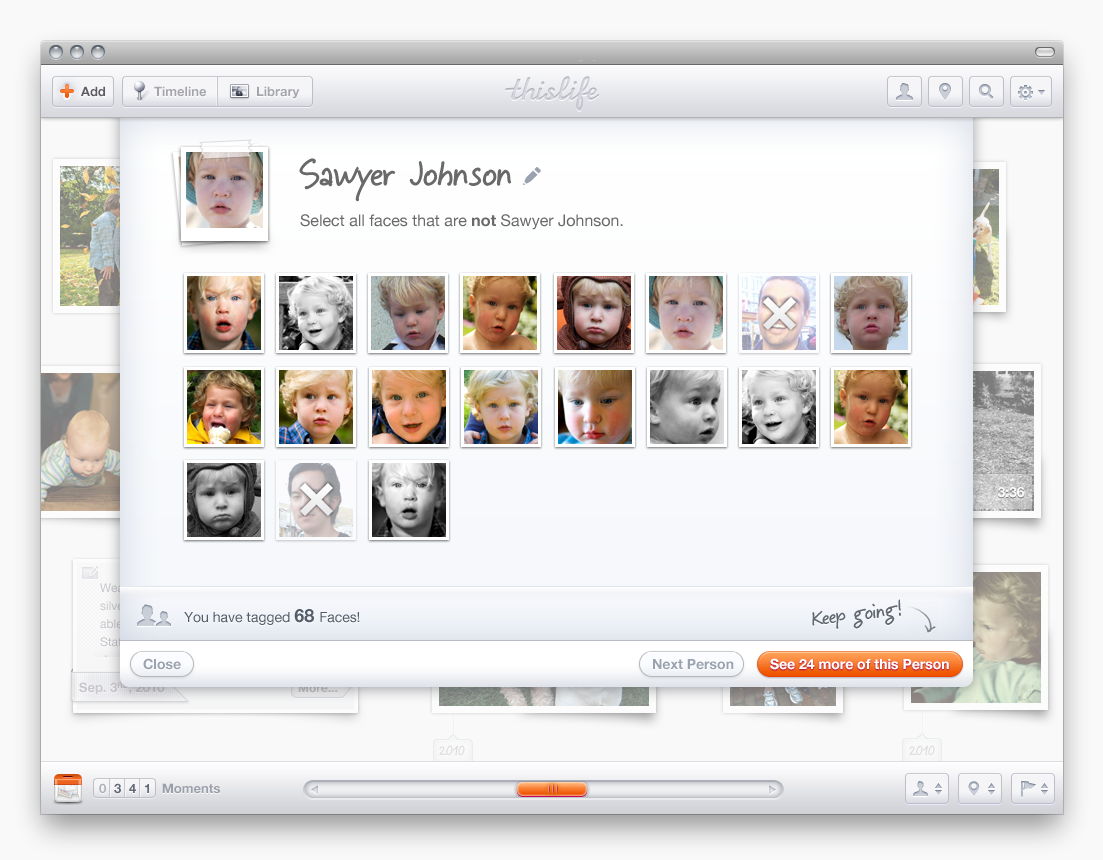 With facial recognition, as well as GPS location data attached to photos and tags that can be added to photos and videos to provide more context, ThisLife users have a good set of tools to search through and organize their media assets. For instance, you can drill down and find only pictures that include two family members in the same photo, or one family member on vacation or participating in a certain activity. On the location front, there’s also a map function so you can see flags of photos from wherever you might have taken them.

In addition to its awesome web experience, ThisLife also has pretty awesome iPhone and iPad apps (just released!) that duplicate much of the same functionality and let you take all your photos with you on the go. Even better, it pre-caches photos so that you can access them, even when you’re not connected to the Internet.

ThisLife has a freemium subscription model for its service, allowing users to sign up and upload photos to start. Once they’ve uploaded more than 1,000 photos or an hour of video, it asks them to upgrade to other plans. There’s the Adventure Plan, which lets them store up to 20,000 photos or 10 hours of video for $7.99 a month or $79.99 a year. Or there’s the Family Plan, which costs $14.99 a month or $149.99 a year. In both cases, Matt Johnson told me most people who sign up pay for a year in advance, rather than paying month-to-month.

The service is currently in private beta, but the ThisLife founders soon hope to open the service up to the general public soon. (In the meantime, TechCrunch readers can sign up by clicking on this link.)

ThisLife currently has 10 employees squeezed into a tiny 183-square foot office in Palo Alto, Calif. In addition to finding new office space, the startup plans to use some of the funding to increase marketing spend and let even more families know what it’s capable of.