After a year or so of stealth preparation, Livestar today launches an iOS app where you can view “trusted” recommendations. In an effort to become the one-stop-shop for everyone’s recommendation needs, Livestar lets people search for recommendations from their friends and critics– of restaurants, music and movies currently.

Eventually founder and former Microsoft M&A exec Fritz Lanman wants to expand the app to cover other verticals like wine, clothing, books, bars, hotels and shows. “We can just keep turning on more and more categories, just like Amazon did, using the same infrastructure / architecture,” he says.

Users log in through Facebook, and define the locale they’re interested in reviews of (if they’re looking for restaurants that is, music and movies don’t use location). 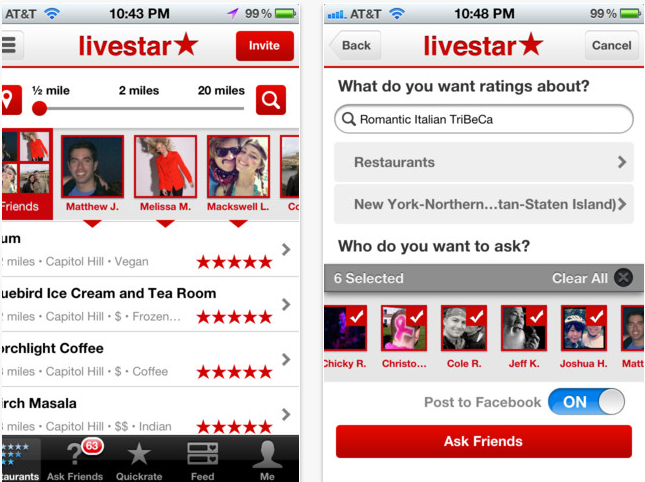 Users can then refine their searches with keywords like “romantic” and “Italian” and tell the app who they want opinions from by clicking on the source slider. The app then quickly loads starred recommendations by source, either by a single source like a friend already on Livestar, or multiple sources like a group of critics from editorial venues like the Village Voice, N.Y. Times, L.A. Times, NY Mag, etc. Users can customize “trusted” source groups.

Essentially functioning also as a Q&A app, Livestar also allows you to ask friends off of Livestar for reviews via SMS, Twitter, Facebook or email (note: Yelp doesn’t allow people to write reviews from their phones).

Lanman thinks he’s solved the problem of getting people to write reviews by making it super easy for them to do so. Users who want their friends’ input on where to go and what to see can select the “Ask Friends” option on Livestar and select the friends they want ratings from either from their own phone Address book or through Facebook.

But your friends don’t have to join Livestar to rate restaurants, and a review can simply be 1-5 stars, with additional notes optional. In fact Livestar pre-computes restaurants your friends are likely to recommend, simplifying the process even further. If a friend’s recommendation isn’t pre-populated, Livestar lets them enter it in. 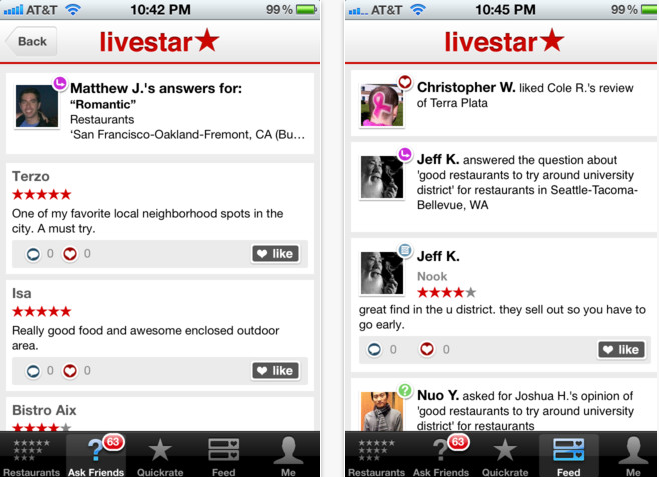 Beyond its core reviews functionality, Livestar also shows users a feed of other users activity, and gives super-active users a “Tastemaker” score. In addition to these features, the app includes menus for the majority of restaurants online in America, in case users want to read what’s on the menu before they visit a recommended restaurant.

While in some ways reminiscent of review app Oink, Lanman views his closest competitor as SMS and email, as in those frantic SMSes that read, “Hey, what’s a good bar in TriBeCa?” or “What’s the best burrito in San Francisco?”. He hopes that Livestar will fill the gap between Foursquare and Yelp, and compensate for Yelp’s hit or miss quality of sources and Foursquare’s over-reliance on the check-in as a review signal.

“All we care about is great recommendations,” he says, postulating that the data from Livestar can be used to make augmented reality more useful. It’s an ambitious problem, and Lanman has corralled four former AWS distributed systems engineers and two NLP / information retrieval specialists in order to basically create a search engine for reviews. “Turns out that’s a difficult thing,” he says.