Open Garden was definitely one of the most interesting and ambitious startups to launch at TechCrunch Disrupt in New York last month. The service, which helps you share and crowdsource your mobile connectivity, was one of the Startup Battlefield finalists and even though it lost to Uberconference, the company got a lot of momentum out of its launch. Today, Open Garden’s CEO and co-founder Micha Benoliel told me that the company’s Android and desktop apps (Mac and Windows) have now been downloaded over 100,000 times. In addition, Open Garden is launching an update today that will greatly improve the user experience for new users and add a few new features for existing users.

At its core, Open Garden lets you share your mobile connectivity. Once installed, your phone will automatically look for other Open Garden-enabled devices, create a mesh network among them, and route your traffic through whichever device offers the fastest connection. Thanks to this, your phone can then use a laptop with a wired connection to go online instead of your slower 3G connection. All of this happens in the background. You don’t have to make any of these decisions yourself and there’s no need to pair devices manually. For more details about how the service works, have a look at our more in-depth coverage here. 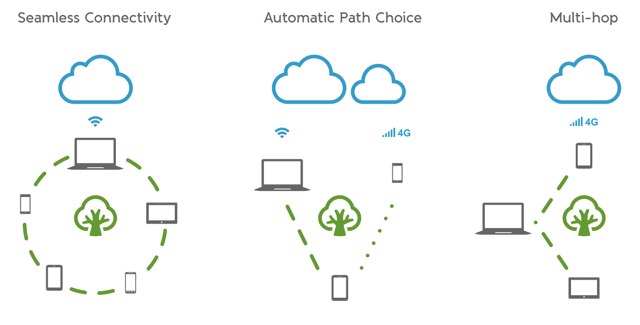 One issue with installing a service like this, though, as Benoliel told me, is that you probably don’t need it when you install it (you obviously have a working Internet connection at that time, after all). That led to some confusion for Open Garden’s users, so the service now asks new users to also install its software on another device so that they can see it in action. The company also made a number of other tweaks to its user interface based on its users’ suggestions.

With this update, Open Garden is now also able to catch 100% of all traffic on phones running Google’s Ice Cream Sandwich version of Android. The service previously captured all web traffic from Android tablets and the Mac and Windows, but Android users had to install a plugin for Firefox for Android to use the service (and will still have to if they are using a pre-Ice Cream Sandwich version of Google’s mobile OS). This, says the Open Garden team, will benefit both users and carriers.

With one of the next updates, Open Garden promises to ship multi-path access. Once this feature is enabled, your device will be able to bundle both your 3G or 4G connection and a WiFi network together, giving you a faster connection.

Currently, Open Garden is most popular in the U.S., followed by India, France, the U.K. and Brazil. The company is already talking to a number of carriers in a few countries and is currently working on raising additional capital.