Banner ads have been around for over a decade, and though they may have been effective back in the mid-’90s, today they just feel like relics. You probably can’t remember the last time you clicked on one. (I know I can’t.) Sure, display advertising is evolving, and marketers still spend billions on display, but as much as we try to spruce them up, they remain one of the weakest forms of digital branding. In the meantime, publishers have become ravenous for better ways to monetize their audience without plastering banners all over their sites.

Founded in 2010, Finnish startup Kiosked is on a mission to help publishers more effectively turn their content into dollars: By converting that content into a storefront. (Or, in their terms, a “kiosk.”) In other words, Kiosked allows advertisers to link their products to relevant images and multimedia within online content so that consumers can buy those items direct. While that may sound gimmicky, there is at least one notable investor that sees potential in the startup’s alternative sales platform.

The startup announced today that Finnish serial entrepreneur and Chairman of Rovio, Kaj Hed, is leading a $5.75 million round of seed funding in Kiosked. This is big validation for the young company, as Hed has not only built and sold international software companies, but he’s also the founder of investment firm Global Inter Partner and majority stakeholder (69.7 percent) in Rovio, which is of course best known as the creator of Angry Birds.

As a result of the investment, Hed will be joining the startup as the chairman of its board of directors, where he will help lead the company through its planned expansion beyond Europe to the U.S., Asia and Africa and the growth of its team from 30 to over 100 over the course of the year.

A group of private investors along with Tekes, the Finnish Funding Agency For Technology and Innovation, also contributed to the startup’s first round of funding. According to Kiosked founder and CEO Lars-Michael Paqvalén, the company has already been finding signs of validation in the market, as it is now connecting with more than 10K brands worldwide, with over 10 million products now being offered for sale through its platform. Its recent partnership with popular Finnish fashion brand, OnePiece, has seen an average of over 9 percent CTRs.

The new Kiosked board chair said that he believes the company is in a position to create a new paradigm in online advertising that could eventually change the way brands connect with their customers. Of course, while the funding helps, there is obviously some trepidation for both publishers and consumers in having advertising linked so closely with editorial content. It’s probably going to be quite some time before the Web completely turns away from those pesky banner ads, but, for publishers, any appealing alternative will do. And in that sense, Kiosked is definitely on the right track.

As to how the startup’s platform works: Kiosked has built a repository of millions of copyright-free images, which can then be tagged with related ads and product information and descriptors. When consumers click, they are given the choice of making online or offline purchases, for example, along with the ability to find the closest brick-and-mortar merchants if an item isn’t available online, save their products in a wish list, or share the product with friends.

Should a reader click through to buy, publishers and content producers will earn sales commissions from those purchases, and thus begin monetizing their content. This is where the startup’s business model comes into play, as it either charges a commission to brands for directing a sale or a fixed fee for when users perform certain actions. How it charges, the CEO says, is based almost purely on performance — which brands love to see. It then shares splits profits with all parties that take part in the sale, whether it be publishers, rights holders or fans.

Though it will take scale for Kiosked to really begin pulling in any significant revenue, the CEO says that in-content marketing represents up to a $132 billion market opportunity, and there’s plenty of room for experimentation when it comes to monetizing online content. For content producers, it’s all about being able to capitalize on the shopping and buying impulses that their content creates. If Kiosked is able to prove out its model and finds appeal among online marketers, you could be looking at the next big Finnish company. 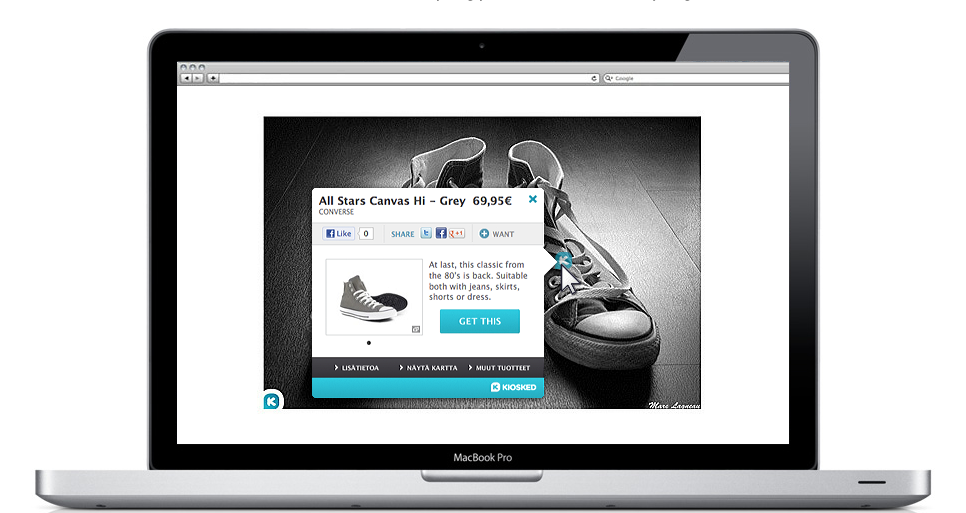