Cloud storage company Bitcasa today announced that it’s now opening its beta to the public. The service, which says that it will offer its users unlimited cloud storage, is currently available for free, but the company plans to charge $10/month after the beta period. In addition, the company also announced that it has raised a $7 million Series A round led by existing investor Pelion Venture Partners and new investor Horizons Ventures. Andreessen Horowitz, First Round Capital, CrunchFund, and Samsung Ventures also participated in this round. This brings Bitcasa’s total funding to $9 million. The company says it will use these new funds to bring its new storage and data management offerings to market faster and expand its sales and marketing teams.

In total, Bitcasa says, its users have now uploaded more than 1 billion files for a total of 4 petabytes of data to the service. The company launched at TechCrunch Disrupt last September and lets users store, sync and backup a virtually infinite amount of data. The company says that its client-side encryption ensures that your data remains safe. To ensure easy access to your most often used data, Bitcasa caches these files on your local machine. When it launched last year, the company stressed that its advanced de-duplication algorithms and compression techniques are what enables it to offer this unlimited amount of cloud storage. Bitcasa has over 20 patents on this technology. 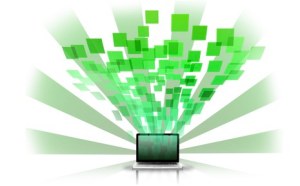 Just like most of its more “traditional” competitors like Dropbox or Google Drive, the service also puts a strong emphasis on sharing data with friends, family or co-workers, though because of the massive amount of storage it offers, the company also positions itself as a cloud backup service.

Pelion Venture Partners managing director and Bitcasa board member Carl Ledbetter noted in a statement earlier today that he believes “Bitcasa is the first and only service that provides unlimited storage of all of a user’s files in the cloud, making the cloud-based virtual desktop a reality. This is the way we will all connect to our on-line, tablet, mobile, and PC-based environments in the near future, and Bitcasa is the defining step.”

Too Good To Be True?

When it first launched at Disrupt last year, the company’s service was greeted with a healthy dose of skepticism. Unlimited storage, after all, comes pretty close to sounding too good to be true. Now that it is in open beta, the company will have a chance to prove itself to a wider audience.