(Photos by John Ha for TechCrunch)

New York is an interesting place for startups. Not because they’re technologically driven or that they’re chasing after the Valley but because New York has something to offer everyone. It’s a town filled with over eight million people across every industry known to man. And it’s in that spirit that General Assembly has grown over the last year and morphed into what it is today, an education driven startup looking to impact the local startup community and help them grow.

Having outgrown the previous space at 902 Broadway, which is sandwiched between the Flatiron and Union Square, the team at GA has moved up the block to a larger campus at 915 Broadway. (902 will remain open for classes and shared workspaces.) The new space is 12,000 square feet with five classrooms, a dedicated event space and studio space for students to work on projects. It even includes wooden bleachers for students to interact. (Unfortunately, you won’t be able to sneak underneath to smoke your pack of Marlboro Reds.) 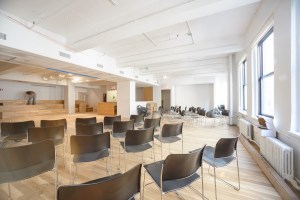 “We set out to build this community and one of the things the community asked for were classrooms. So we built one classroom on what we called a campus and then we learned that there was a lot more demand for that,” Adam Pritzker, Co-founder and chief product officer at General Assembly told me. “This is a continuation of what we’ve been doing. When we initially started it was a grass roots community building effort. We wanted to build a community for technologists, designers, and entrepreneurs.”

Beyond the opening of a second space in New York, General Assembly has a two pronged plan for this year. First, it’s looking to create a global network of campuses for individuals seeking opportunities in education, technology, business and design. They’re well on there way having opened up the London campus in March and opening the doors to Berlin later this summer. Secondly, they’re looking to move their educational content online having experimented with live streaming and catalogued courses.

“We really believe the future of education is blended and converging the offline and online experience is what we’re trying to do,” said Pritzker. 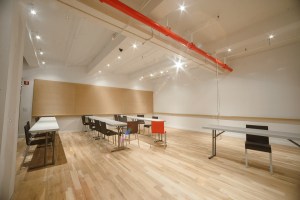 Walking around the new campus, you get the sense that GA wants you to co-op with others. Every classroom is filled with tools to collaborate like whiteboards and chalkboards with every room emptying out into common areas where students from different classes can meet and mingle.

The fact that something like General Assembly exists in a place like Manhattan is a testament to how important it is to work with others in person rather than online. There’s a special kind of serendipity that comes from direct contact that you can’t achieve over IM, conference calls or even video chats.

“New York represents a lot of different stakeholders and a lot of different types of businesses. There are a lot of startups where technologists are working with people from other industries that have had careers with different core competencies,” said Pritzker. “GA represents the convergence of all those things. We see ourselves as that larger community of people who are trying to get together to make things. The informal piece [common areas] are as important as the formal piece [workshops] and it’s the combination of those two things that can lead to something amazing.” 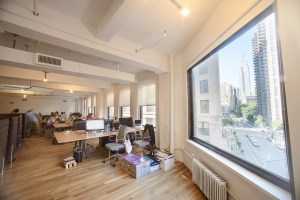 An exchange program between campuses is on the horizon, too. While each campus caters their curriculum to the needs of the community, there are basic courses like front end web development, user experience design and an intro to Ruby on Rails that will be taught at every campus.

“What happens when we start to connect students with other students across the global network? That’s what we’re thinking about next.”