When it rains, it pours. Another new arrival in the private social networking space is Burst, a mobile video and photo sharing solution designed for families- or really, for anyone interested in an efficient way to privately share media recorded on your mobile phone.

Founded by serial entrepreneur Bryant McBride, Boston-based Burst offers a handful of unique features for sharing clips from your child’s soccer game or school play, for example. And it even works for sharing things with “dear old dad” (OK, my dad) who’s still struggling to figure out his new-fangled smartphone, and wishes you’d just send him an email already.

First, a little background. Burst CEO McBride admits that he’s not your typical startup founder, “I’m not a 25-year old kid in a garage,” he laughs. He’s a 47-year old dad who helped grow and sell four companies: Myteam.com, where he was SVP Operations, Vision Sports and Entertainment Partners (founder and CEO), which was acquired by The Active Network in 2005;  Football Scouts, Inc., which sold to ESPN where it later became ESPN Insider; and Sports Technologies, Inc. whose FanNation property was sold to Sports Illustrated/Time Warner. Prior to his entrepreneurial activities, he worked as VP of Biz Dev at the NHL.

So, given McBride’s interests, it’s no surprise that with Burst, he was inspired by thinking about the neighborhood sports angle. 50 million kids play sports in the U.S., he says, and parents record a lot of footage of that. But Burst isn’t just for the soccer mom/dad set, it’s for anyone who wants to send out photos or videos privately with minimal effort. 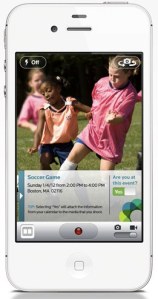 The app works as a camera replacement, and does a few nifty things that make it less painful to use. For example, it auto-titles the recordings based on what’s on your phone’s calendar for that day and time. (E.g., the app prompts you, is this “Joey’s soccer match?” and you can accept or reject). It also saves you the step of uploading, because by the time the video finishes recording, it has already been saved to the cloud. And the company also took a smart approach to permissioning and authentication, allowing you to “un-Burst” (remove access to) any photo or video after it’s been shared. It’s like SnapChat for grown-ups, perhaps.

Another feature, which is going to be helpful to me personally I have to admit, is that photos and videos recorded via Burst can be sent out via SMS or email – and the recipient doesn’t have to have the app to view them or save them. That solves the typical app adoption problem – no need to use the app, grandma, here’s the content! However, the shared content isn’t accessible indefinitely by recipients, unless they download the app. (Incentive!)

There are a number of features in the works, which are undisclosed for now, but will be interesting. Burst is also currently a free app, with tentative plans to go freemium in the future. In tests, the app worked fairly well for recording video, but the video import process from the camera roll (on iOS) was a bit slow and neglected to import the audio. That said, the app is very new and is a work in progress. It’s still worth keeping an eye on this.

Burst.it is backed by $3.45 million in funding from the angel investors that have been with McBride for around 10 years now. The funding was led by Tom DiBenedetto, part-owner of the Boston Red Sox and Owner of AS Roma of the Italian Series A league; Fay Vincent, Former Commissioner of MLB; Jesse Itzler, Co-Founder of Marquis Jets and serial entrepreneur, as well as individual investors and a strategic media investor whose identity is not public at present.

Burst is available for iPhone or Android here.