Last fall, Finnish designers Jori Lallo and Karri Saarinen soft-launched a simple bookmarking tool called Kippt that aimed to give users a more elegant way to store their information on the Web. At the time, Kippt was just a side project, as Lallo was working with Pownce founder Leah Culver on Convore, the YC-backed message board app. Over time, the founders added a number of integrations and features and published an API to let users modify their extensions and build their own apps using Kippt’s tools.

Since March, the founders have been focusing on their bookmarking app full time, developing a plan to take the app beyond bookmarking with the goal of changing the way people collect, share and discuss links and online information. Today, the startup is launching the next phase of its vision: A new version of the app, which sees it move from being a simple utility tool to a collaborative service that allows users to co-create lists, add comments, and share them publicly with the Kippt community.

The startup is also announcing that it will be participating in Y Combinator’s Summer 2012 batch. While YC’s resources and funding will help Kippt scale and build out its product, Lallo tells us that Kippt’s users have been asking for more collaborative and social features from the get-go. So, the founders didn’t see a reason to hold their launch until Demo Day, they wanted to get their new collaboration tools into the hands of users as soon as possible.

As a tool that enables users to save and organize links into simple lists, collect bookmarks and clips with their colleagues, while making all of that shared content searchable, Kippt shares commonalities with popular bookmarking and productivity tools like Delicious, Pinboard, and Evernote. While Kippt was initially aimed at an individual use case, the longterm roadmap is much more ambitious, as Lallo says that they’re aiming to do the same for links as GitHub did for code. That is to say, actually make it actually social.

And while Delicious and Evernote may be nominal competitors, the co-founder thinks that, in setting out to change the way people collect and share links, its true competitor is still good ole email and those pesky wikis.

Going up against email is a daunting task, but the founders believe there’s no better way to do this by creating a collaborative utility app, a la Google Docs, where teams can quickly and easily comment and discuss links and lists, save links and changes, extract quotes, etc.

Kippt’s new collaborative lists let users add other people to their lists so that they can share or add new clips and invite other users to join, making it a great tool for work and side projects. In emails and chat rooms, discussions tend to either be slow or too noisy, so, a la social collaboration apps like Yammer, Kippt has added commenting functionality so that users can just open a clip, comment, and keep that discussion out of everyone’s inboxes.

Users can also create public lists and clips, take advantage of an improved “read later” feature, toggling read later status for any clip depending on which list it’s save to, as well as the ability to modify clips in its new extension.

To support development and pay for the founders’ expensive tea and coffee habits, Kippt is also launching a Pro Account option, which offers advanced features, like indexing users’ imported clips for easier searching, for $25/year.

Offering extensions for every major browser and a read and write API on top of its new collaborative features, Kippt is becoming a much deeper tool that speaks to a greater variety of use cases, be it individual or group, or at work or at home. It’s getting deeper while maintaining its awesome design and ease of use. That being said, Lallo says that the startup has a long list of features it wants to add as it grows (most of which revolve around social and clip management).

It will be interesting to see how the startup evolves as it hunkers down at Y Combinator, but it’s definitely one to watch. 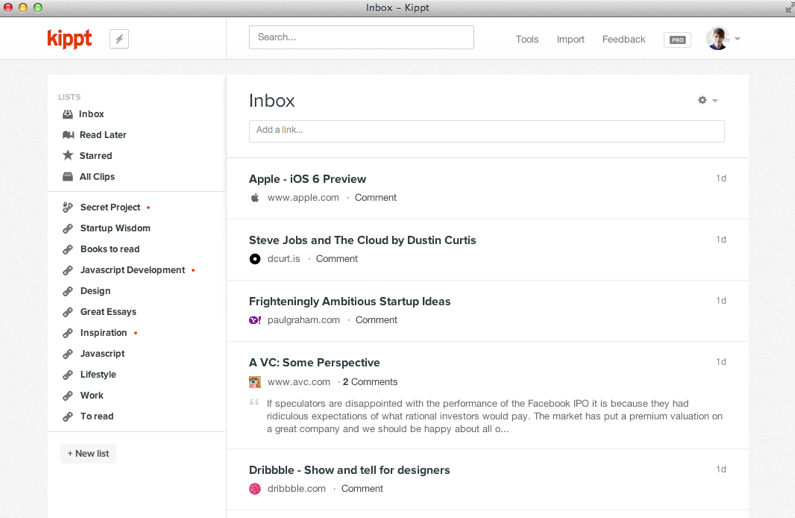