Usually, funding stories are about how much capital a company raised from its investors, but in the case of project management and collaboration service Wrike, it’s really more about how little the company decided to raise instead. Wrike, which is already profitable and which is currently being used by about 2,000 businesses (including Deloitte, Adobe and EMC), was founded in 2006. Even though it would probably be pretty easy for the company to raise more money, the Wrike team and the company’s founder Andrew Filev decided to just raise $1 million from TMT Investments for now (at a $20 million cap).

Wrike, if you are not familiar with the service, is a project management service that helps its users aggregate all the pieces of work they need from across the web. It also features nifty email integrations for Gmail and Outlook (a version for MacMail is coming soon as well). The company recently launched its freemium version, so you can now use it for free if you only need support for up to five users and don’t need the service’s premium features. Some of the company’s users, its founder and CEO Andrew Filev told me earlier this week, currently use the service to manage 10,000 folders and 100,000 documents. The philosophy behind Wrike, though, is that it’s easy enough to use for business users with no background in project management. The service also doesn’t force its users to use a certain methodology to manage their projects. 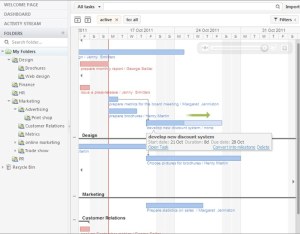 Early on, as Filev told me, the company decided not to take any outside funding and was completely bootstrapped – first by its founders and then through revenue. This, he said, allowed the Wrike team to stay closer to its customers. While this was a “brutal” process, as Filev put it, it ensured that the company listened to its (paying) customers and quickly iterated based on their needs.

Just like it takes an iterative approach to develop its product, Wrike also wants to employ a similar approach to taking investments. Taking such a small investment means that the company doesn’t have to give up too much control over its destiny. TMT also isn’t getting a board seat, for example. “Rather than being disruptive,” says Filev, this investment allows the company to “stay on point with and execute more quickly on our vision.”

The company plans to use this new investment to make a bigger marketing push in the enterprise world and among developers. Wrike also plans to expand its integration with other platforms. In addition, Wrike plans to launch a new set of mobile apps for its customers in the near future.