Sharing isn’t something we like to do with our data. Stealing, however, is. Knowing someone is on your WiFi network slowing you down is bad news bears, whereas hopping on an open network when your ISP lets you down is no problem whatsoever. That said, a new pay-as-you-go hotspot package fresh out of TechStars NYC Demo day is looking to make the most of that dynamic, and it’s called Karma.

Karma is amazing in that it not only offers a pay-per-use model with a 4G mobile Hotspot, but it offers something called social bandwidth. Here’s how it works:

I own a Karma hotspot. It costs me $69 for the hardware, which has a 4G connection courtesy of Clearwire and lasts up to eight hours on a single charge. By buying the hardware and signing in to the network with my Facebook ID, I automatically get 100mb of free data. From there, I can buy as many GB of data as I want for $14.99 each. 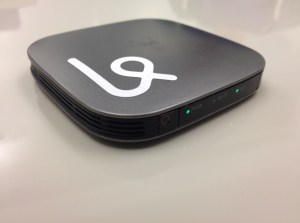 So now I’m set up, and I head off to a Starbucks to get some work done. My Karma network is an open one, so people in Starbucks can try to hop onto the network and steal some bandwidth. Little do they know, Karma is giving them a free 100mb of data as well for using the network if they sign in with Facebook (they can’t get on otherwise). More importantly, I also get 100mb of free data for every person that uses my network. Give some to get some — that’s what my mom always says.

The idea is that the network thief, let’s call him Kevin, doesn’t even need to buy his own hotspot to be a part of the Karmic action. He now has 100mb of free data attached to his Facebook ID, so he can use the rest of it the next time he sees a Karma network. He can also purchase 1GB of data without owning a hotspot and continue using Karma networks as he sees them.

Karma has also just announced a deal with American Airlines, which will offer free Karma hotspots to frequent fliers.

Check out all of the cool stuff coming out of TechStars NYC Demo Day here.