Two weeks after pushing through an update for its most popular browser, Opera Mini for mobile devices, Opera is turning its attention to its desktop product, with the release of Opera 12 for Macs and PCs. Opera tells me its desktop browser is currently the second-biggest product in terms of monthly users, with 60 million, compared to 173 million for Opera Mini and 17 million for Opera Mobile. While that is pretty small compared to other desktop browsers like Chrome, Firefox or Internet Explorer, that number is also growing at a healthy pace right now, increasing by 11 percent of all users over the last year, with average revenue per user on the desktop product (mainly from ads) is up 20 percent.

With rumors of a possible Facebook acquisition going quiet for now, Opera is looking to boost that desktop usage number even more with a list of new features, including browser camera support, security badges, right-to-left language support, hardware acceleration (something it has long touted with its mobile product), improved plug-in support and something fun: the introduction of skins, or themes, for the browser. (And no, we don’t know if Sesame Workshop has approved use of what looks a lot like the Cookie Monster skin pictured here. We’ll ask. Update below)

Among those features, perhaps one of the most notable is the new camera support: as with features like social sharing on Opera Mini, the camera support is a feature designed to keep users on the web (and Opera’s own browser specifically) rather than turning to native applications for different functionality.

In this case, the thinking is that enabling the camera will give developers an incentive to develop apps for Opera that integrate hardware from the device.

“We’re big believers in the web as a platform. We want to show developers how the web can evolve into an even stronger application platform,” a spokesperson told me. “Developers want the web to be more competitive against what native apps can offer. This is a step in that direction.”

Opera’s also featuring a few interesting little applications to show the camera feature off including this browser-based Asteroids-type game called FaceKat — although you’ll have to install Opera 12 and have a camera enabled on your computer to use it.

With the five new languages that Opera has added to its language support — Arabic, Persian, Urdu, Hebrew and Kazakh — now brings the total number to 60 for the browser. Opera notes that ability to add right-to-left reading for Arabic, Persian, Urdu and Hebrew opens the door to a potential 400 million internet users.

One area that seems an obvious one for Opera to tackle further is integration between the functionality it offers on mobile with what it offers on the PC, if only to increase more stickiness with that part of its user base that consumes the internet on both screens. There is some of this existing already. For example Opera Link lets a person synchronize several desktop items with your mobile device. This covers Bookmarks, Opera’s Speed Dial buttons (which are more than just links to pages, but live buttons that can feature info like social updates if they link to a social network), and custom searches.

Opera wouldn’t comment on whether it plans to take that integration to other areas yet like its app store, which offers native apps on mobile but doesn’t have an equivalent on the desktop browser. Nor would it say whether it plans to also offer its Smart Page with social features on its desktop browser at some point. It does, however, offer some degree of integration, in the form of its Opera TV Store, which offers HTML5 web apps for connected TV platforms.

Update: “It’s not technically Cookie Monster…just a blue monster,” a spokesperson tells me about the face on the skin. “Hence why there’s no official mention of ‘cookies.'” Hmm. 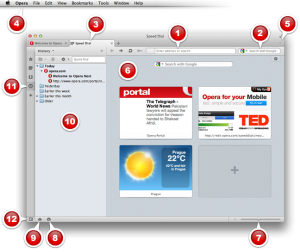