What good is a Foursquare check-in if it doesn’t lead to a coupon or freebie? Why bother tweeting about a brand you like if they don’t acknowledge your undying love and loyalty? With TechCrunch Disrupt finalist SocialStock, those types of actions may now be rewarded…or at least that’s the company’s vision. The service, founded by Subbu Rama, aims to be a stock market for people and places which assigns a point value to users’ social networking actions. Mimicking the framework of a real stock market, those actions become shares and then those shares can turn into real-world rewards from participating business or brands.

What’s interesting about the concept behind SocialStock, is that it makes the idea of someone’s social capital – their “worth” in terms of their social networking actions, check-ins, Foursquare mayorships, tweets, etc. – portable. If you lose your Starbucks mayorship after moving away, for example, you could just turn around and buy “shares” of another local coffee shop that doles out rewards. All your hard work in being a loyal coffee-drinking local doesn’t have to go to waste.

In addition to earning shares for your activity, users are assigned a share value of their own, too. The system is based on someone’s social capital, which is determined using algorithms that measure things like the number of friends and followers you have, your history of check-ins, as well as the influence and importance of those who you’re connected to. 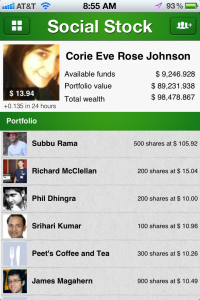 It’s a bit of a simpler computation than Klout’s Kscore, perhaps, which measures your reach and influence in more sophisticated ways, but then again, it’s a different system than Klout, too. Instead of handing out special “perks” only to those who have mastered gathering “influence,” SocialStock has users building up their virtual shares through their actions – a tweet, a Facebook post, or a check-in as related to a business or venue. Further down the road, other actions will be rewarded, too, like a Yelp review or even an Instagram photo.

By aggregating the actions, businesses and brands would have better insight into who their most loyal customers really are. In other words, SocialStock is taking a more holistic view of the social networking ecosystem.

There aren’t any launch partners teamed up with SocialStock for today’s debut – only the framework itself is going live. But, if the concept proves successful, participating brands could use the system to set the conversion rate on translating these stock market-like “shares” to real-world rewards. For example, 1,000 shares could be exchanged for a free latte or a free meal. And then, to earn the same reward again, the customer would have to remain loyal by tweeting, Facebooking and checking in some more.

Based in Sunnyvale, SocialStock is basically in bootstrapping mode with under $100,000 in funding from a few friends. The website is launching today as is the mobile app, which lets you discover people and places nearby that have spikes in social activity. 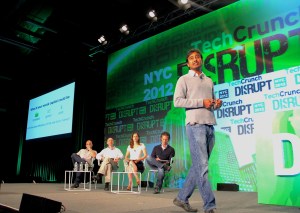 (Note that the questions reflect a somewhat confusing pitch)

Q: Not sure I understand, is this loyalty thing? Why not pull up my Klout score? Who’s the target?
A: If you move from NY to somewhere else, you lose your social capital. With Social Stock, you can transfer the social stock to the new place.
Q: But aren’t you worth less because you can bring less people to that shop?
A: More about your importance – it’s a bet on that person.
Q: Do I get social capital dollars when I sign in?
A: Everyone gets capital based on their influence on Twitter/Foursquare, etc. Buying and selling like stock market.
Q: How are you picking social networks/how algorithm works?
A: If person has a lot of activity on Facebook, their value is higher. On Twitter, it looks at followers. Existing social graph + frequency of visits to shops.
Q: What’s the core reason for product?
A: Goal is take social capital and make it a platform.