The gTar by Incident is disruption defined. It takes the guitar, an instrument with a steep learning curve, and adds a bit of digital wizardry in the form of an embedded iPhone to make learning dramatically easier. The company brags that their modern take on the guitar allows for three levels of difficulty, rather than the traditional single really difficult one. But thanks to the iPhone and a clever app, this $450 electronic guitar essentially teaches users the ins and outs of the instrument.

The startup recently turned to Kickstarter to raise $100,000. However today they gave the crowd at Disrupt a musical treat — a demonstration at Startup Alley. And the device seemed to work as advertised. 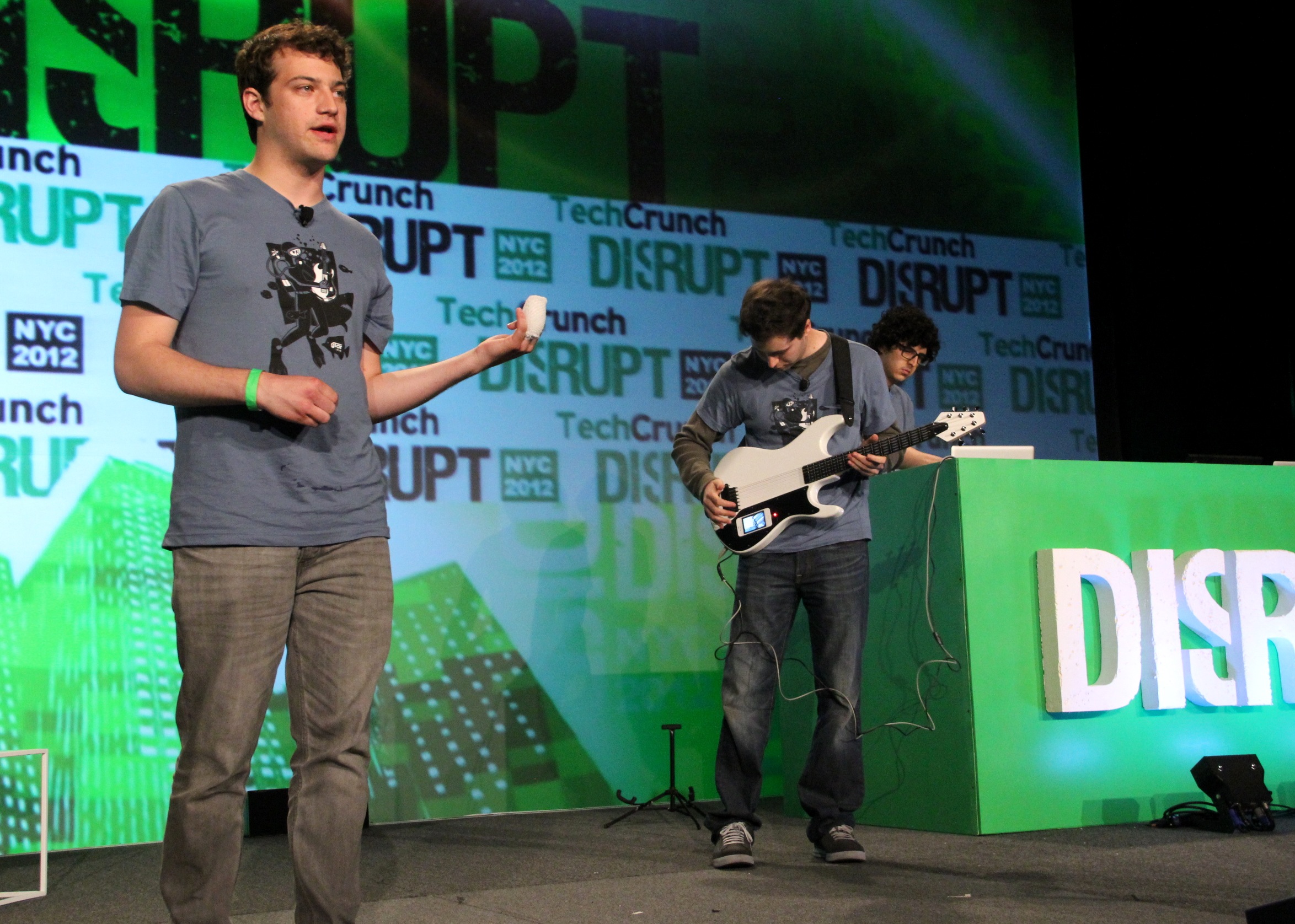 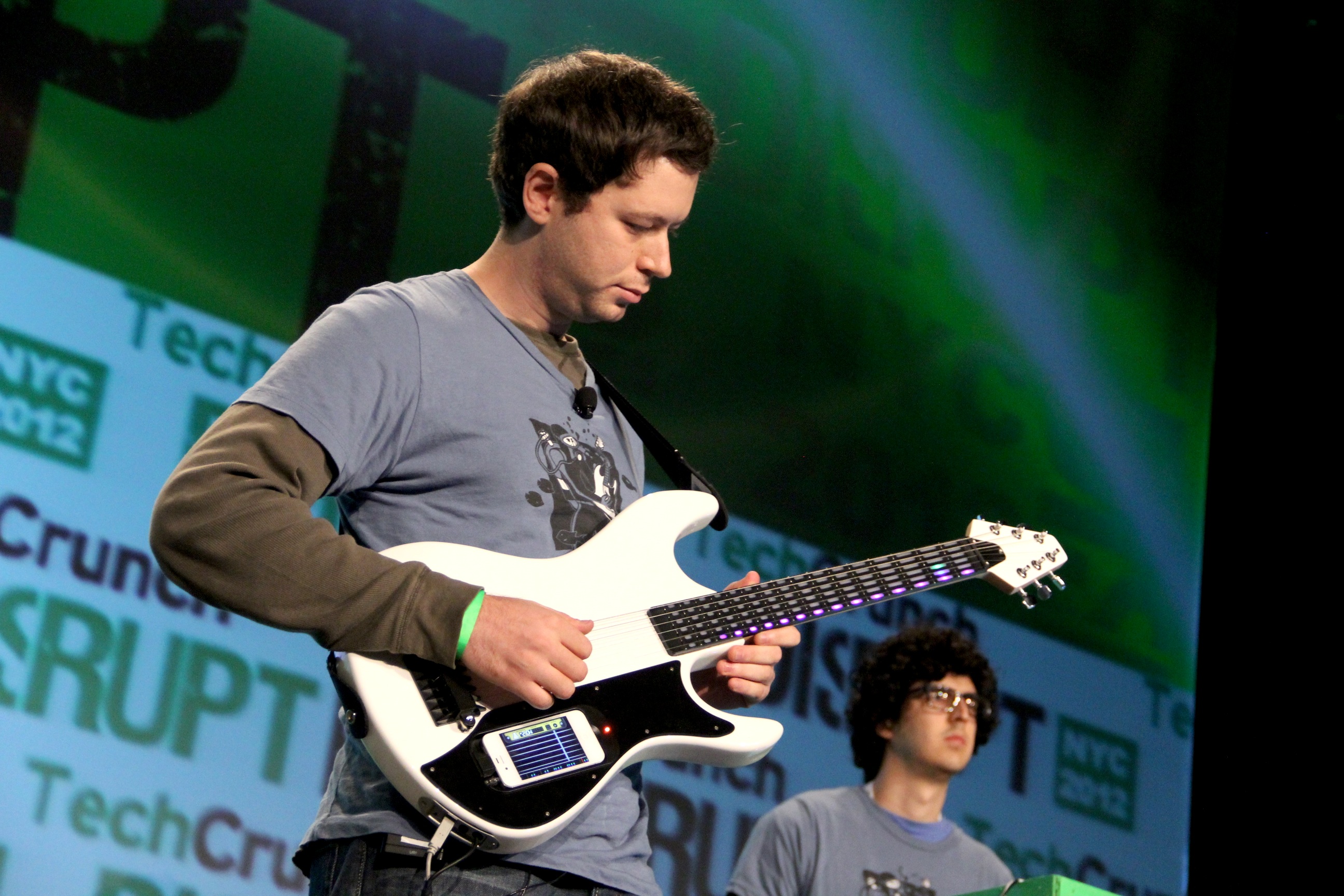 After docking an iPhone in the guitar’s body and loading the app, the neck comes alive with a series of interactive LEDs along the fretboard. In Easy Mode, these lights illuminate in sequence with the teaching app, showing the user which string to play. Medium takes it up a level by forcing the player to use the frets and the strings. However, the gTar’s Smart Play function only plays the correct string.

Thanks to sensors rather than traditional pickups, the guitar will only play the appropriate string. But, as the user improves, the guitar does away with some of the nanny features, allowing the user to have, for better or worse, full access to the guitar’s musical capabilities. The Free Play mode allows for even more options, letting the player turn the guitar into a wide-range of instruments thanks to its iPhone core.

The gTar seems to have all the right goods to disrupt a space as old as string instruments. This could be the high of Disrupt NYC talking, but it feels as if this could be, or perhaps lead to, the guitars for the Guitar Hero generation.

q: From a user perspective, will gTar players be competent at playing the guitar or is this a way for people to fulfill a guitar fantasy? Or is this an actual learning tool so they can pick up a guitar and jam solo?

a: On one hand, yes this teaches people the fundamentals on how to play the guitar. These are real strings. They take the same amount of pressure.

q: How do you handle pace and rhythm?

a: The app does move with the tempo of the song accurately. We were playing with some display techniques to show people. We are going with an MVP solution. The capabilities of the technology is a lot larger than we can demo.

q: From a song library perspective, can you create a song from my iPhone or is it limited to your library?

a: Our content platform is developed on a platform we built and we deliver songs directly from our crowd — kind of seamlessly so that the user doesn’t really see it. The platform doesn’t take the songs from iTunes; that’s definitely not a trivial problem. We have first parties to help get songs onto the platform. It takes about 30 minutes per song.

q: Is there a speaker built-in?

a: So you can either use the iPhone’s speaker and thanks to a cavity in the body under the pickup, it amplifies the sound a bit. we are going to be providing a headphone adapter. But you can pop it into a Marshall amp.

q: Can you say how much it costs wholesale?

a: We’re going to be releasing through Kickstarter. We’re going to release at $450. The way we’ve structured our cost of goods, we’re working with a manufacturing partner in China, who are a really great group of people. Out of the last six months, I’ve been there three. We’ve spent the last 3 months with them. We are building it clean and lean.

What Kickstarter really helps us do is to ascertain how many people want to buy it. And for a hardware business that’s very important for us to know.