One of the things that people who move away from New York City lament is the lack of delivery services elsewhere. In the Big Apple, you can famously get pretty much any kind of food — or anything else really — delivered straight to your door, 24 hours a day, rain or shine. San Francisco, for example, is a bit more limited. You actually have to leave your apartment to get most things (first world problems, I know, but it is a thing that people complain about.) Well, at least that was the case until today.

Postmates, the urban logistics startup that launched its flagship business-to-business courier system back in December, just launched the public version of its first consumer-facing app, “Get It Now.” The app, which is currently available on the iPhone and active only in the San Francisco Bay Area, lets users get anything in San Francisco delivered to them in under an hour.

As my colleague Ryan Lawler has reported, Get It Now has been a big hit in insidery SF startup circles since it launched the private beta version of its app two months ago. It amassed about 1,000 beta users, and grew its courier capacity to be able to fulfill 1,000 deliveries a day with an average delivery time of 30 minutes. And the people who used the app really used it: In private beta, Get It Now averaged $116 in revenues per user per month.

Postmates co-founder and CEO Bastian Lehmann tells me that the company has simply outfitted its current courier fleet with credit cards, allowing them to purchase goods for users. The company takes between 20 to 40 percent commission on each purchase’s delivery fee. The big thing here is that it allows consumers to turn any place into something that delivers, he said: “It allows consumers to hack the system. It’s no longer that if you want delivery there’s only that one Italian place, or that one Chinese place, that they can order from. You open the app and see that you have all these beautiful places around you.”

A Sleek Exterior, But Specialized Tech

When asked about the competitive landscape — you can use Taskrabbit and Exec to find someone to deliver something for you, for example, and on-demand car service Uber looks like it’s dipping its toes into the delivery space — Lehmann said that specialization is what gives Postmates its edge. “Uber is a premium product, and I don’t see them starting to deliver food for $7.99 per order. Taskrabbit and Exec are all cute… but if you want efficient delivery of something specific in your city, Get It Now is going to be the fastest option. We’re doing one thing, and we’re doing it really well.”

He said that with its logistics platform, he sees Postmates as a startup more in the vein of companies such as Amazon, FedEx, and Square. “It’s a huge technology play, and we’re taking something that was super complicated for a lot of merchants and making it very easy.”

Shifting The Focus From B2B To Consumer

Postmates will continue to operate its business-to-business courier service, but sees the Get It Now app as a way to effectively promote itself to merchants more effectively than its own small sales force could. “Initially, our plan was to concentrate on merchants. What we realized, though, is that it takes a lot time to sign up all these merchants — if you are a small business, you have several startups coming in every week trying to sell you on a a rewards platform, or a new daily deals app. We realized that maybe sales is not in the DNA of our company.” From a business perspective, it seems to be a very smart move toward efficiency.

Postmates currently has 12 full-time employees, and has raised $1.75 million in seed funding from a group of angel investors. Lehmann says that geographic expansion beyond the San Francisco Bay Area is certainly in the company’s plans, and that Postmates will likely raise a Series A round before it moves into other metro areas.

Here are a few screenshots of the Get It Now app in action (click on images to enlarge): 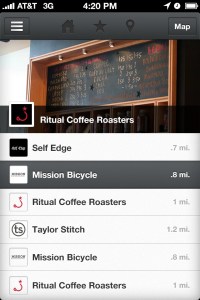 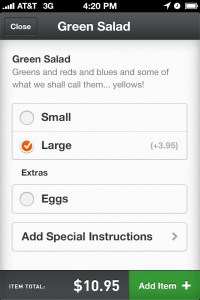 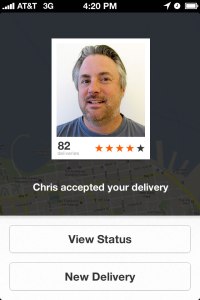