Honestly.com, a startup that allowed professionals to submit anonymous reviews of their coworkers, has been pretty quiet for the past couple of years. Turns out that’s because the company has been busy reinventing itself. Today it’s unveiling a new product and a new name — TalentBin.

Co-founder Peter Kazanjy says TalentBin addresses one of the big problems with Honestly, namely the lack of content. Rather than relying on users to create all the reviews, TalentBin looks at the content that already exists on the Web — specifically, people’s activity on a variety of social networking sites. Kazanjy calls that activity your “professional exhaust,” and argues that it contains lots of relevant information about your professional interests and accomplishments. So TalentBin aggregates a person’s activity across sites like Facebook, Twitter, Google Plus, Meetup, Quora, Github, Sourceforge, and Bitbucket, then uses that data to create a searchable profile for recruiters.

Comparing the product to LinkedIn’s recruiting tools, Kazanjy says, “we’re kind of like that for the rest of the Web.” In other words, recruiters can use TalentBin to take their search beyond LinkedIn, finding new candidates and new information about existing candidates.

For example, Kazanjy says he conducted a search for Ruby on Rails in the San Francisco Bay Area, and he found 4,500 matching profiles on LinkedIn, 156 profiles on BranchOut, and 22,000 profiles on TalentBin. He also argues a TalentBin profile can be much richer than what you’d find on LinkedIn or a traditional resume. A profile might just say that someone was an engineer at Company X and then at Company Y, with no additional detail, but TalentBin might show that they’re constantly tweeting and posting on Quora about Ruby and therefore rank them highly in a search for Ruby engineers. And since recruiters theoretically get a better sense of your real interests and passions, that may mean you’re more likely to get approached about jobs that you actually find exciting.

For now, TalentBin is focused on technical talent, but Kazanjy says it could expand into other fields where this data is relevant, which he predicts is “any knowledge worker.”  It’s also entirely recruiter-facing for now, meaning that only recruiters see the profiles, but Kazanjy says it might add features that allow people to see and correct their profiles in the future. (Coderwall is also trying to create an aggregated profile and reputation system for programmers, but rather its model is inverted, starting out as a site for coders then maybe eventually moving into recruiting, and the name, at least, implies that it’s pretty focused on programmers.)

Recruiters can access TalentBin via the website, or as a plugin to Human Resources Information Systems, Recruiting CRM programs, or Applicant Tracking Systems.

This is actually the company’s second rebranding, because back in 2010 it changed its name from Unvarnished (at the same time it announced $1.2 million in funding from First Round Capital, Ron Conway’s SV Angel, Charles River Ventures, and others). Hopefully this will be the last. Kazanjy says early signs are positive — even though today is the official relaunch, TalentBin has been in private beta testing for months, and already has 60-plus corporate customers including Intuit, Groupon, and Yahoo. 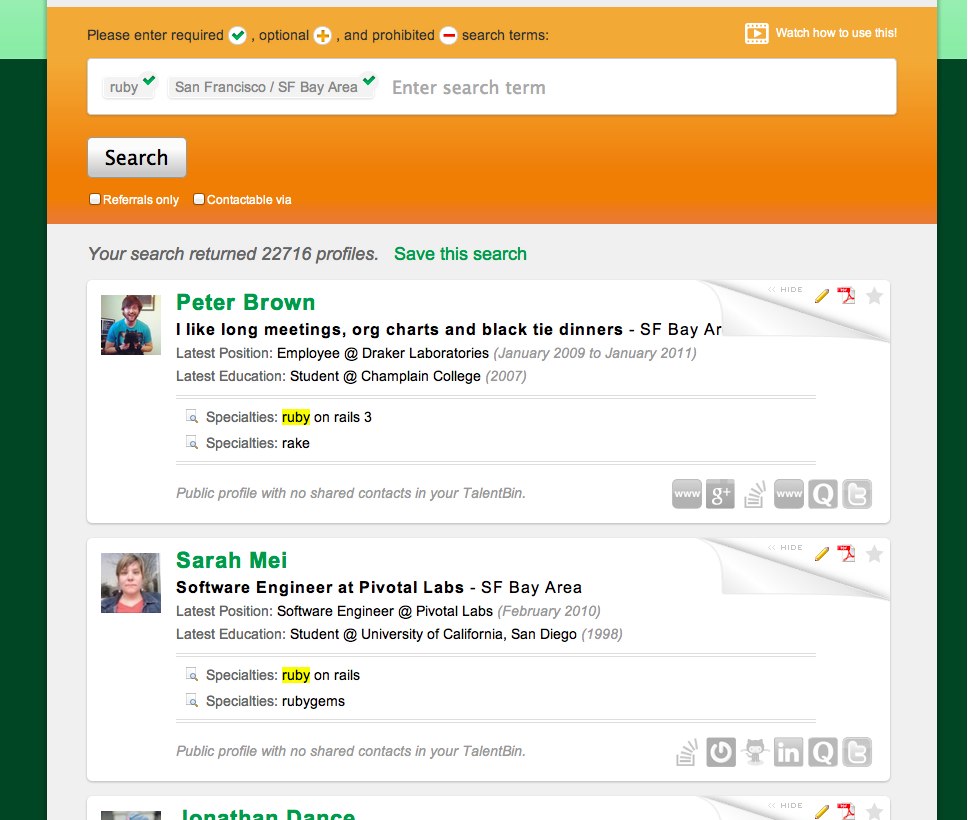