I keep hearing rumors about the ridiculous amounts of money that Weebly is making. But the San Francisco company, which provides a set of tools for small businesses and other organizations to easily create their own web sites, has only scoffed at the nine-figure amounts I’ve thrown at them. Instead, they’ve shared something else — a new mobile app that lets new users quickly create their own sites, or existing folks manage what they have going.

In a series of quick swipes, it lets you get through naming a site, upload images, choosing a theme, and publishing your first post. If you want to get fancier, you can also take photos and alter them with a set of filters, or shoot videos to publish.

The admin interface lets users manage multiple sites, and comes with some of the core features from its home site, including comment moderation, and form creation for surveys, contact lists and submissions (which will all also work on mobile). 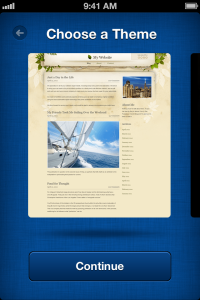 Web-savvy folks may not realize it, but many organizations still lack a strong online and mobile presence. For example, Frederic recently covered an industry study showing that 95% of independent restaurants don’t have a mobile site, and only 40% have online menus.

Yes, there are a number of other companies out there that let people set up their own sites. But Tumblr is more of a social network, Facebook and Twitter accounts are more about getting distribution than providing a full set of features, and heavier-duty blog platforms like WordPress require more work to set up and maintain.

Weebly’s main competitors are companies like Wix and Webs.com — or, rather, the lack of awareness among categories of users like those poor independent web site owners.

It’s making big inroads, though, which is why I keep hearing those revenue rumors. Since launching in 2007, it has gained 11 million registered users (people who have set up web sites), and accounts for around 2% of all sites on the web. Traffic is around 75 million unique visitors a month. Its net promoter score — an industry calculation of how likely users are to recommend a service to others — is an unusually high 80%.

Its revenues, which come from special features like e-commerce stores, have made the company profitable since January of 2009, the cofounders tell me from their awesome new offices downtown — and “very profitable” today.