Whether you have $10,000 or $10 million, trying to find help to manage your investments can be a minefield.

Mid-level financial advisory firms have come under scrutiny for somewhat shady practices — so even though you can certainly find very good advisers there, it can be a crap shoot. Meanwhile, many of the industry’s top-notch advisers deal only with the accounts of super wealthy people — and even then, it can be difficult to trust that they really know what they’re doing, and have your best interests in mind (as Mark Cuban has written, “If the broker had a clue, he/she wouldn’t be a broker, they would be on a beach somewhere.” Cheeky, but it kind of makes sense.) And each person’s financial situation is unique, so one-size-fits-all advice from books and websites on investing just don’t quite cut it.

Enter SigFig. Launching in public beta mode today, SigFig is a web application that tracks all of your various investments — bank accounts, 401k plans, IRAs, stock holdings, and the like — and gives tailored recommendations about your portfolio’s performance and changes that you could make. The software is really powerful, and the user interface design is super slick.

It’s a very visual product, so SigFig’s co-founders Mike Sha and Parker Conrad came to TechCrunch TV to give a detailed walk-through, which you can watch in full in the video embedded above (you can also click on the images embedded in this post to enlarge them.) 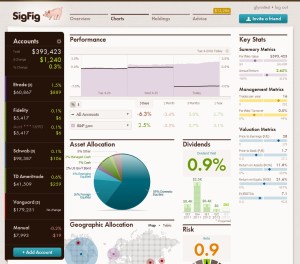 Here’s how it works: You plug your brokerage accounts into SigFig, by giving it your usernames and passwords, a blind verification process during which SigFig never actually sees your personal sign-in data. SigFig also says it is encrypted by 256-bit SSL security, “the same level banks and brokerages use,” and is verified by three separate independent security firms.

For users, SigFig is completely free. The company makes money by taking a commission on new investments you decide to make through the site’s recommendations, but that’s not on a pay-to-play model. SigFig only surfaces what the best investments are based on their value, and funds can’t pay SigFig to have privileged ranking in recommendations.

In a way, it seems to me that SigFig is doing to the financial planning industry what airline and hotel booking websites such as Orbitz did to the travel planning industry back in the 1990s, and what property search sites such as Zillow and Trulia did to the real estate industry in the 2000s. It’s a space where individual gatekeepers — in this case, financial advisers and brokers — have held the information and power for far too long. The data itself should be free, and now that we have software that can help parse it, it can now go directly to consumers who can make their own decisions. 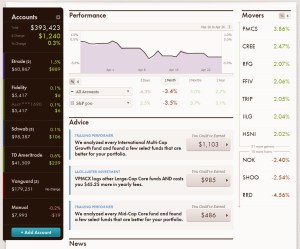 The thing is, SigFig does not completely want to rid the world of financial advisers. The site will refer you to local financial advisers that it has vetted, and it plans to add more to its network going forward.

In this way, it is more like Trulia and Zillow (which try to work with real estate agents, rather than replace them) than it is like flight and hotel search sites (which were pretty much the death knell of travel agents.) SigFig is a dashboard that lets you personally monitor your portfolio, whether or not you have a financial planner also managing it. It isn’t an either/or solution.

The SigFig product is new, but the company has been around for a while: It’s the same team that made the financial Q&A site and portfolio tracker Wikinvest. The company, based in San Francisco, has raised $8 million in venture capital and has 40 full-time employees.

SigFig’s launch comes at a good time. Right now as tech IPOs abound, there are a good number of data-driven people who are coming into money. They’re no doubt being pitched by financial planners, and if they use them that’s great — but they may also want to use a tool like SigFig to keep a handle on their financial situation themselves.

SigFig provided TechCrunch with a number of invites to its beta mode, so go here if you want to check it out.