Yahoo-owned Flickr is one of the largest content sources for Pinterest, with users posting Flickr images on the pinboard sharing site in droves. But in order to Pin a Flickr photo on Pinterest, you had to use Pinterest’s own Pin button, and you couldn’t Pin photos to pinboards directly from Flickr. Until today. Flickr, which just debuted a new HTML5 photo uploader last week, is announcing a partnership with Pinterest to add Pin It buttons to sharing options on the photo sharing platform. Flickr also assures that all pinned images will be properly attributed, regardless where they are pinned from.

As Flickr’s head of product, Markus Spiering, explains to us, the photos sharing site wanted to make sharing to Pinterest a one- to two-click process, for both content owners and for people who discover interesting photos on Flickr to be pinned. Now, you’ll see a Pin It button on Flickr image pages where you see Twitter, email, Facebook and Tumblr share buttons. You’ll be able to share photo pages, favorites, and groups. If you pin a lot, the share menu will prioritize the Pin It button, showing it as one of the two shortcuts on the photo page.

Not all images will be able to be shared. This decision is up to the content owner, says Spiering. If the photographer is fine with an image being shared, then the source of the image will always be attributed on Pinterest. If a photographer does not want their content to be shared, the share menu will be disabled making the Pinterest option unavailable as well. Photographers can also designate that they can share the image, but others cannot.

Every image shared from Flickr will be clearly attributed with the name of the photographer, the title, as well as a link to the photo page. Attribution cannot be edited, and pins and repins of their images will be credited and linked back as well, ensuring people can leave comments, fave the photo, or contact you directly on Flickr.

And if someone has embedded your Flickr photo on their website or blog and it is pinned from there, the photo will automagically be attributed on Pinterest and linked back to the Flickr photo page.

Attribution is a huge issue for both Flickr and Pinterest. As you may remember, back in February, VentureBeat reported that Flickr added Pinterest’s ‘do-not-pin code’ to Flickr pages with copyrighted or protected images, so that these pages could not be added to Pinterest at all. As we know, copyright issues are a larger problem for Pinterest.

But considering Pinterests’s viral growth and traffic, as well as Flickr’s presence on the platform; Pinterest can’t be ignored. The photo sharing site had to come up with a way to make pinning easy and attribution work for photographers. Other sites, including online retailers eBay and Amazon, can’t ignore Pinterest any longer as well, and have also recently added Pin It buttons. It should be interesting to see if other popular photo sharing sites start incorporating Pin It buttons for seamless pinning soon. 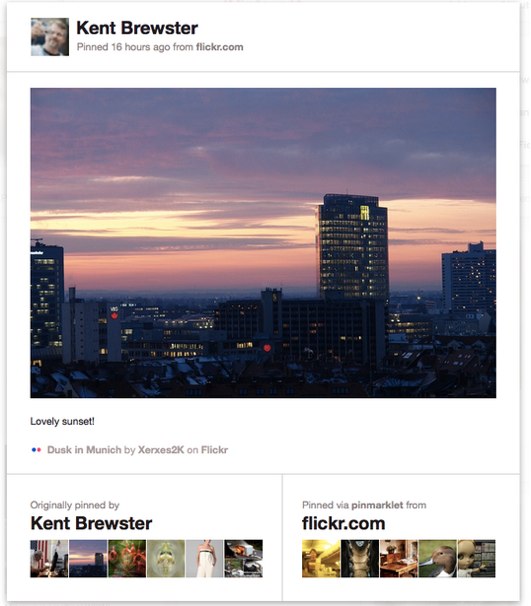