Samsung has been, for years, slowly approaching Nokia as the world’s biggest handset maker, and today looks like the day the crown has been passed: As of last quarter, Strategy Analytics noted that Samsung shipped the most mobile devices of any single manufacturer world-wide, also taking pole position in smartphones. At the same time, Nokia not only slipped in those rankings but it also got another slap in the face, as Standard & Poor’s, the credit-rating agency, downgraded Nokia to “junk” status.

The news comes on the same day that Samsung presented its Q1 earnings, in which the Korean company reported revenues of 45 trillion won ($40 billion) for the three months that ended March 31 — citing strong results in the division that includes mobile devices, with especially “brisk sales” of its GALAXY S II smartphone and newer Galaxy Note device.

S&P’s downgrade for Nokia is the second credit-ratings blow to Nokia this week: Fitch also downgraded the company’s rating.

S&P says Nokia is now at BB+/B with the outlook at “negative.” It’s basing this not just on the weak results this quarter but also Nokia’s guidance for Q2: “We now expect Nokia to report significantly lower margins and cash flows in 2012 than we had previously expected,” S&P said in a statement.

“We now believe that revenues from the Devices and Services division could decline in 2012 by the same extent as in 2011 (minus 18 percent) after Nokia reported first quarter 2012 revenues below our expectations, particularly for Symbian-based smartphones. We still expect revenue from Lumia smartphones to grow over time but not sufficiently to offset a rapid decline in revenue from Symbian-based smartphones over the next few quarters.”

Nokia, once again, issued a statement reiterating its current net cash position of €4.9 billion ($6.5 billion) and determination to push ahead with its turnaround program.

It’s a big contrast to the story elsewhere: While Samsung does not provide unit sales numbers in its earnings, Strategy Analytics estimates that Samsung sold 93.5 million handsets in the last quarter to Nokia’s 82.7 million, the first time that it has overtaken the Finnish handset maker. Samsung accounted for 25.4 percent of all sales, compared to Nokia at 22.5 percent. Apple, with its smartphone-only line up, rounds out the list at 35.1 million units shipped, or 9.5 percent of the total. All others accounted for 156.7 million devices, giving a total of 368 million mobile shipments in the quarter. 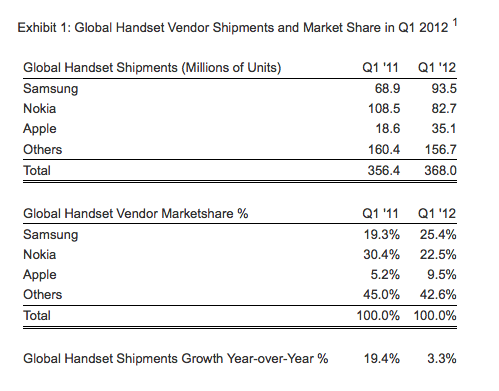 In smartphones, Samsung has been even more impressive, says Strategy Analytics, effectively eating up all the share Nokia had and riding the wave of growth to pick up new users: the analysts estimate that Samsung nearly tripled its marketshare over last year, capturing 30.6 percent of the market compared to 12.2 percent a year ago. The works out to shipments of 44.5 million units, nearly four times as many as last year. 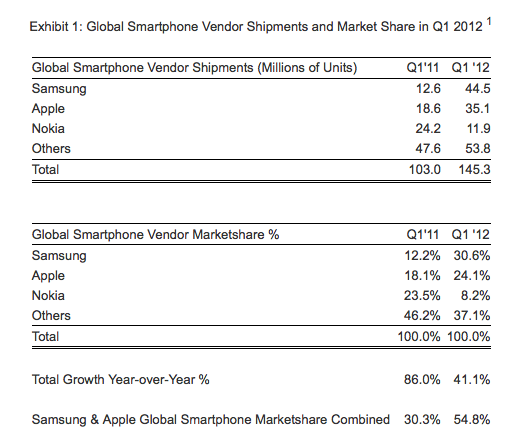 The usual caveats apply: These numbers represent estimated shipments and not actual sales — although some believe these can be interchangeable. Samsung does not provide hard numbers for shipments or sales, so that, too, can be debated. And, other analysts will produce different numbers — in this case, IHS iSuppli, as Barron’s points out, notes that while it too believes that Samsung overtook Nokia in overall mobile shipments, in smartphones, Apple is still selling more. (If only Samsung would just come clean on device numbers.)

In its quarterly earnings today, Samsung noted that its revenues represented growth of 22 percent compared to the same quarter a year ago. Margins improved as well: they are now at 12.9 percent, up 1.9 percent on last year. That helped contribute to a 98 percent increase on operating profit, which was 5.85 trillion won ($5.2 billion) for the quarter.

Samsung’s “seasonal” decreases in sales of semiconductor chips and TVs were more than offset by its performance its IT & Mobile Communications division, which includes its mobile phones business. That division made 4.27 trillion won ($3.8 billion) in operating profit. And revenues for that division were 23.33 trillion won, with most of that (18.90 trillion won; $16.7 billion) combing from mobile. Those mobile revenues were by by 86 percent over last year.