You may have heard of Zocdoc, the site that lets you search for doctors based on location, specialty, what insurance providers they accept, and then book appointments instantly. Zocdoc brought a simple and effective solution to a problem that frustrated consumers for year (the time consuming nature of physician search), and has blown up as result. Earlier this year, Zeel launched to bring Zocdoc’s model to alternative healthcare providers, like massage therapists, personal trainers, nutritionists, and acupuncturists, allowing users to easily search for and book appointments with these providers.

To accompany its launch, Zeel raised $1.5 million in funding from Matt Ocko of Archimedes Capital, Esther Dyson, Ken Cron, and a host of other angels. Today, only three months later, the startup is adding another round of funding, led by Prolog Ventures, a life sciences VC firm based out of St. Louis. The round also included previous investors Ken Cron, Tim Kendall, and Eric Ober, as well as new investors like CEO of Shopwell.com and EIR at IDEO, Brian Witlin, Ritesh Veera, and FAO Ventures Founder Farooq Oomerbhoy. The team isn’t disclosing the size of the around, but we’ve heard it’s close to the size of its first round. Really the second tranche of a two-part seed round.

As part of the new investment, Ilya Nykin, the co-founder and managing director of Prolog, and Cron, an angel investor and former board member of LogMeIn, Computer Associates, and Midway Games, will join the startup’s board of directors.

At launch in January, Zeel had about 1,000 practitioners on board, a number that has since grown to 2,300. These practitioners are spread across 11 different cities, with about half located in New York. Why the disparity? Two reasons: Zeel is based in New York and wanted to reach critical mass in the local market before expanding, and between 10 and 12 percent of all health and wellness appointments in the U.S. happen in NYC.

That being said, there are approximately 750K health and wellness providers in the U.S., Zeel CEO Samer Hamadeh tells us, and the startup eventually wants to list them all. Of course, the highest densities of providers are in the top 20 metro areas, so over the course of the year, Zeel will begin filling in the blanks.

But, “I’ve never gotten acupuncture or a massage,” you say, “so why should I care”? Well, my friend, in case you haven’t noticed, the cost of healthcare in this country is fairly high, making a good case for preventative and alternative approaches to medicine. Instead of paying for the astronomical cost of hospital care, surgery, or drugs, many are turning to preventative methods of healthcare and treatment. And this only going to continue as consumers get over the stigma attached to anything with the word “alternative” in it.

Beyond its 2,300 providers, Zeel connects consumers to an additional 30K qualified preventative and alternative health practitioners, plus some original content to help guide consumer decisions. (It also added chiropractors last month.) Obviously, when it comes to treatment, and your health, quality is essential. Hamadeh says that these aren’t the type of massage therapists you’ll find on Groupon, they’re vetted, certified experts.

While Zeel allows consumers to search for health and wellness experts by price, location, years of experience, and certification, the real key is search by availability. At this point, Zeel is plugged into about half of their providers’ schedules, so they have the ability to show consumers when the business has open spots. This is huge. It means that users get to pick and choose and book up to the last minute, while offering providers the opportunity to fill in the gaps in their schedules. If open slots expire, that’s a sunk cost. (For local businesses, scheduling is a huge problem, especially as it relates to daily deals. See here.)

As to its business model, it’s a bit similar to TaskRabbit, in that they’re the middleman between consumers and providers. If users book an appointment, Zeel charges a 12 or 13 percent fee, inclusive of credit card fees. This means they net about $9 a transaction. This means that there’s no advertising on the site, and it’s not really lead gen either, and most importantly, consumers don’t pay anything extra.

Up next? The Zeel CEO says that the company is in the process of developing mobile apps, which will show up this year, and it’s also working on a loyalty points program. Zeel was founded by husband-and-wife team Alison Harmelin and Samer Hamadeh. Samer is the former CEO of Vault.com and EIR at Lightspeed Venture Partners.

For more, check out Zeel at home here. 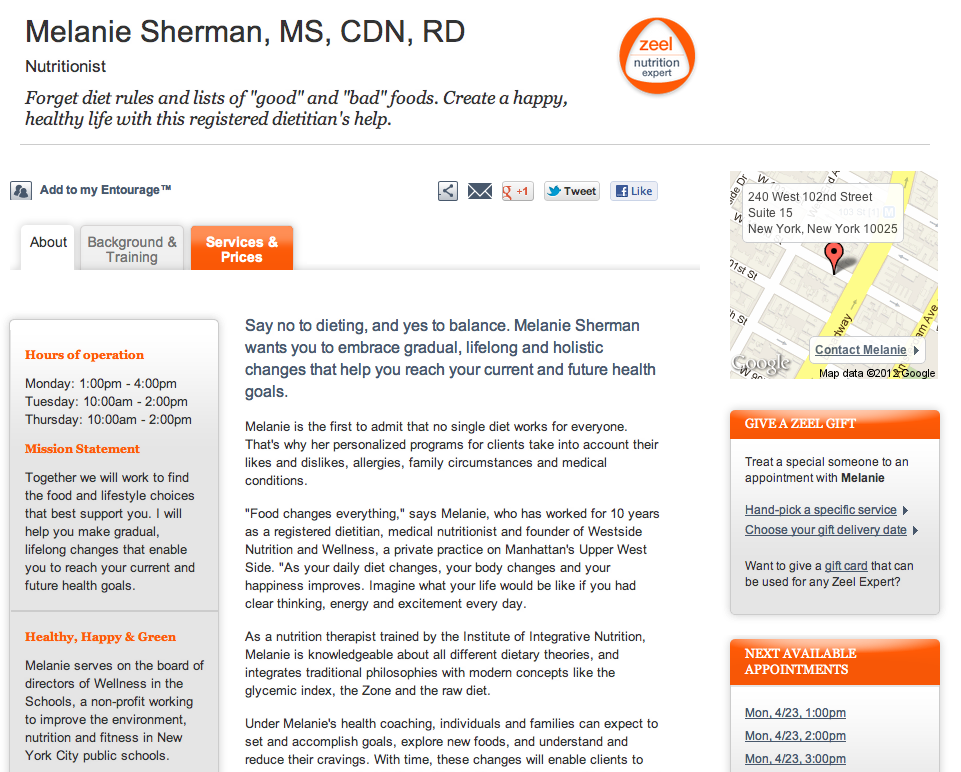