There are plenty of services out there that will let you build simple mobile apps without the need to know how to program. The problem with most of these is that you quickly reach their limits once you want to build more complex apps. Tiggzi, a new cloud-based service by software engineering company Exadel, wants to provide a bridge between the world of drag-and-drop app builders and more complex tools. With Tiggzi, you could build a basic app without any programming knowledge, but the service is really meant for more advanced users who can use it to design complex apps that can hook into virtually any REST API on the net.

Tiggzi lets you build apps for the mobile web, as well as native iOS and Android apps. The company plans to launch support for native Windows Phone and Blackberry apps soon. For a fee, Tiggzi will also submit your apps to the major app stores for you and host your web apps. 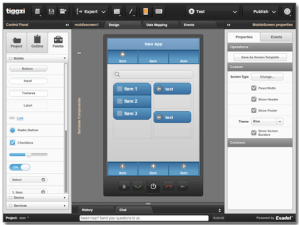 The first thing you will notice once you start using Tiggzi is that it offers some support for novice users, but that the team really built the service for a more professional audience. Tiggzi, for the most part, only offers blank templates (beside one template specifically designed for musicians). As it gives you a lot of freedom, it also allows you to make mistakes. In return, though, you get a far more powerful tool and the ability to combine the user interface editor with REST APIs. The company is mostly aiming this service at professional developers and IT departments. For beginners, though, Tiggzi also offers a number of step-by-step tutorials as well. 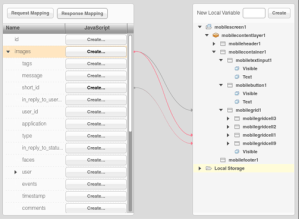 The “secret sauce” here, Tiggzi told us earlier this week, is that users can save these API connections as plugins and re-use them and share them with the service’s user community. Tiggzi also plans to roll out a library of pre-packaged API plugins soon. The company also hopes that third-party services will create plugins for the service as well. This combination of an app builder with support for third-party resources, the company hopes, will allow it to stand out from its competition.

The service comes in a free version, which is limited to one project with up to three screens. The paid versions start at $15/month, which lets you work on three projects with 10 screens simultaneously and which also includes support for multi-user collaboration. The service’s high-end plan, at $50/month has no limitations and includes unlimited web app hosting (that’s a $10/month extra with the other plans).