Crowdtap, a web-based network that allows brands to connect with their most engaged fans and customers through social media, has just expanded to two more platforms: Facebook and mobile. The mobile application comes in the form of an iPhone app which allows fans to participate in the brand’s “challenges” (games and contests) in order to earn rewards.

Meanwhile, the new Facebook tab sets up a special “VIP” section right on the brand’s own Facebook page, to allow for interactions with its top fans.

Since launching at SXSW in 2011, Crowdtap has raised $7 million in funding from the Foundry Group, and now counts among its customers over 60 well-known U.S. brands, including American Express, Old Navy, Sony Pictures, Dreamworks, Verizon Wireless, Microsoft, Pinkberry, and more. 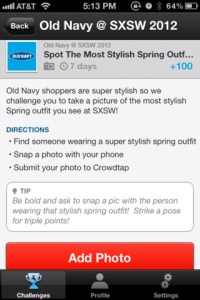 In Q1 of this year, Crowdtap reports it has surpassed its entire revenue from all of 2011. Although the company declined to give hard numbers here, we do know that it had already surpassed $1 million in revenue as of July 2011. They tell us that’s it’s safe to assume that this number was “well surpassed” through the end of the year. And now they’ve made all that and more in just one quarter.

For those unfamiliar, Crowdtap allows a brand to reach out to its influencers from communities they’ve built up on Facebook, Twitter or in CRM databases, as well as reach out to Crowdtap’s member base of 250,000 consumers. In exchange for interactions with the brand, which may entail things like surveys, polls, online discussions or social sharing, the consumers are rewarded through exclusive access to new products and content, or whatever else it is the brand in question wants to offer – freebies, perhaps, or gift cards.

In addition, Crowdtap also supports fans’ favorite charities by allowing them to choose charitable donations instead of cash rewards, and it even goes so far as to require that a set number of a fan’s points are given to a charity.

There’s a “gamified” element to all this, too, as Crowdtap’s members earn points, badges and rewards for their participation.

For the brands and marketers, Crowdtap provides them with an online dashboard that gives them a real-time look into their social communities, helping them see how consumers are interacting and what insights they may have.

One of the first companies to roll out the Crowdtap Facebook tab is Woolite, and several clients are planning to roll out on the mobile app, but Crowdtap is unable to disclose the details at this time, due the the sensitive nature of its discussions with the brands.