In the quest for the Holy Grail of project management software — a product that just feels natural and easy to use — Siasto has made it further than most. If this were The Last Crusade, it’d be somewhere inside the temple, crossing the bridge of faith to reach the chalice.

Siasto might seem a little too familiar at first, as it uses the same concepts as you’ve seen in competing products like Basecamp. You create projects, you add tasks to them, you upload documents, you invite other users, and so on. What’s special is the how the Y Combinator-backed company has organized the interface, and how it’s busy tying in with Google.

Here’s a quick walk-through of what it’s doing.

First, you sign in using your Google identity — the right third-party ID service such for work-related software, considering the popularity of Docs, spreadsheets, and Google Apps for Business.

Second, Siasto manages to mostly get rid of navigation bars in favor of sticking the main information in tiles on the homepage. The result is fewer clicks. People in the system show up on the left-hand side, with pending user invites at the bottom. Projects, in tiled format, are to the right. If any team member makes updates inside of any project, you’ll see the number of new updates listed on the home page within the project’s tile.

There are two other tabs on this page: tasks and the calendar. Click through the former and you’ll see a universal task list, sortable by active or completed, due for whom, and due date. The latter shows the traditional calendar format; beyond listing any upcoming tasks, it lets you click to create new events that you can categorize within projects.

Third, a document section lets you upload files for any project. This part of Siasto’s product is especially well done. There are special interfaces for uploading files straight from Google Docs and Dropbox. You’ll be asked to provide permissions to either service, then you’ll see a file selector from your docs in either. Maybe it’s not new, but I haven’t seen anything quite like this interface before. The documents section also includes special interfaces for uploading from Google Docs and Dropbox or lets you create and edit your own, complete with a WYSIWYG editor (a nice addition you don’t see in a number of competing products).

The company has already done some smart things to further tie in with Google, like adding a “Gmail contextual gadget” a few days ago. Install it, and you can turn an email into a task, event or document in Siasto with the click of a button. 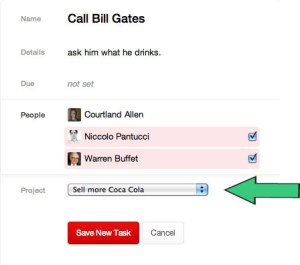 Expect it to go much further with Google integrations. You can import calendar events, for example, but there’s no way to export to iCal or other desktop calendars yet. You can also imagine ways of auto-creating groups by importing the users of a company’s Google Apps account.

Stronger Google integrations would also aid with the biggest overriding problem for these types of companies, which is getting organizations to use them in the first place. That was my problem when I was trying to test it out over the past week while in the middle of a million other things. It simply requires extra up-front investment, even if it is way simpler than most others to use.

All in all, Siasto’s streamlined interface is state of the art for this type of software, but the company will need to keep working on the onboarding and initial user experience to really pull in the types of overworked users that could get the most value out of it. Judging by how well the company has done so far, though, I expect them to cross that bridge.