Titan Gaming, the makers of a gaming platform that enables content sites and social networks to offer cash and prize-based game tournaments, is today announcing that it is embarking on a complete makeover that includes its rebranding as Playsino, along with a new focus, CEO, and some new funding.

Under its new moniker, Playsino will look to leverage its traction in the tournaments and virtual rewards space and double down on another emerging vertical: social casino games. Ambitiously, Playsino is setting out to build “the world’s largest social gaming casino platform,” and is naming a new CEO to help lead the way. Brock Pierce, who will be the startup’s CEO, is the managing Director of the Clearstone Global Gaming Fund, and a serial entrepreneur, having founded eight companies and acquired 30 more in various capacities.

Pierce played an early role in the development of virtual goods, founding Internet Gaming Entertainment (IGE) in 2001 and Zam in 2003. In addition to new leadership, Playsino is also announcing today that it has raised $1.5 million in venture capital as part of an ongoing round. The investment was led by IDM Venture Capital, a Singapore-based venture capital firm, Pacific Capital Group, Siemer Ventures, and a number of angel investors, including Jordan Simons of GCP and Wicks Walker of W4 Ventures. Existing investor Tomorrow Ventures also participated in the round.

With its new capital in tow, Playsino is setting out on a mission to build the largest free-to-play social casino on the Web. Pierce believes that social gaming is at an inflection point, and that social casino games are the catalyst for that movement. Half of the people on the web, or about 510 million, he says, play some sort of social game — a gaming audience that has grown by 71 percent since 2010. With H2 Gaming’s estimate that online gambling could be worth as much as $30 billion globally by 2013, and the U.S. accounting for $4.5 billion of that total, online betting represents a big opportunity.

Social casino games have the ability combine the addictiveness of the games that have made Zynga such a big player in social gaming, like Farmville, with the monetization strategies of more hardcore games, which Pierce believes is a dangerous combination. The CEO says that he’s focused on using the startup’s new capital to step up internal development, but that the company also aims to publish relevant third-party content and will look to acquire independent players as well. So likely we’ll see Playsino developing its own casino games in conjunction with building a platform that allows developers and established players to sell their games as well, taking a cue from Zynga.com.

While the space represents opportunity, the big casino and gambling companies are also in the process of moving online, and competition is certainly going to increase. There’s also been plenty of attention from the Justice Department, and as the space moves forward, it’s likely to include a number of regulations to protect consumers — but which may also limit the amount gamers are allowed to gamble. According to BusinessWeek, at least five states have already introduced legislation that would allow people to play web poker against those in other states.

It’s a space that’s very much in transition as states consider online gambling legislation, and its evolution may well be shaped by regulatory restraints, but there’s certainly a lot of money to be made in social casino gaming, and Playsino wants to be a part of that. Though it’s still early, the established game companies have an easier road into social casino gaming when they see how the space will be regulated, so the startup will have to be ready with some addictive, quality games if it wants to avoid being stifled by the Zyngas and EAs of the world.

For more on Playsino, check ’em out at home here. 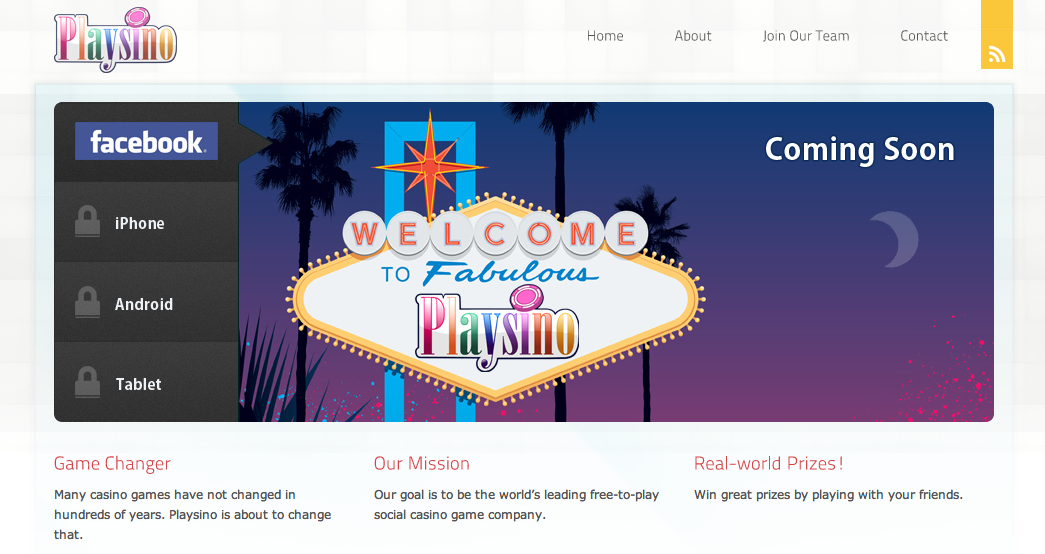