Fab has just released new figures on its growth in Germany and Austria, following February’s acquisition of Casacanda, a top flash sales site previously serving Germany, Austria, and Switzerland. And the news is good, it seems. As of today, the German vertical Fab.de has 500,000 users, having added 300,000 over the past month. And revenue per month is up by over half a million euro.

The increase in user base, for obvious reasons, is also helping improve sales and revenue, the company is reporting.

For the six months prior to the acquisition, Casacanda did less than 1 million euro in revenue total. Now under the new “Fab” brand, the service is doing 1.5 million euro per month.

(Below, revenue per day) 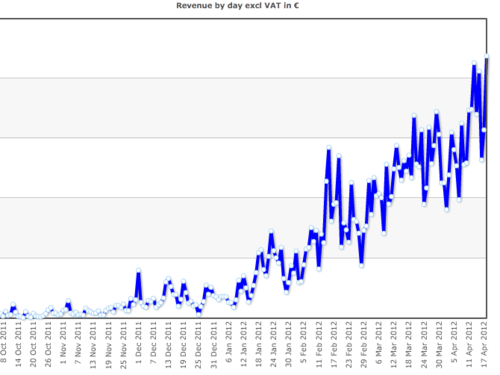 In terms of orders per day, you can see in the chart below how much Fab.de has grown following the acquisition. While Fab declined to provide exact figures, the number of orders per day for Fab.de are now approaching 900. 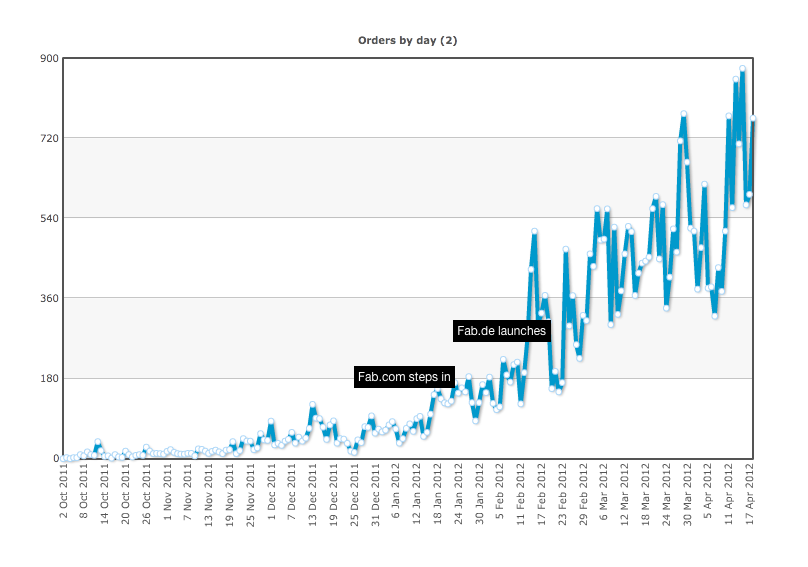 Fab started working with Casacanda in January, then formerly acquired them in February for $11 million, making Germany the first major Fab center outside the U.S.  The news hit three weeks after  the launch of Samwer Fab clone Bamarang in Germany, the UK, France, Brazil and Australia.

At the time, Casacanda grown to over 250,000 members since its September 2011 launch, and was delivering around 15,000 orders per month. CEO Jason Goldberg estimated then that the company would generate at least 10% to 20% of its overall revenue from international in 2012.

The company says it’s now forecasting 20% of revenue from outside the U.S. this year. The U.S., however, continues to be well ahead with plans to hit $100 million in revenue in 2012.