Yesterday, the Daily Show featured a stellar parody yesterday of both Google’s connected, augmented reality eyeglasses (a.k.a Project Glass or, as I like to call it, “Project Sup Now, Warby Parker?”) as well as Instagram’s billion-dollar sale to Facebook. Fittingly, the show is today officially replacing its old app and is going all 2.0 with a new, upgraded and redesigned mobile app — with high-res video. Yes, as The Daily Show tweeted this afternoon, its tech and general news-related hilarity is now available on iPhone, iPad, and Android devices in an app called “The Daily Show Headlines” that — get ready for it — plays the Daily Show!

Headlines replaces the fake news show’s previous mobile app, which will soon be unsupported. The first generation app was a bit of a mess, in that it was awkward to navigate, and only offered low-quality videos and images. Headlines mitigates the pain by way of high-res videos and images, a new, easier-to-navigate layout, and video tiles. 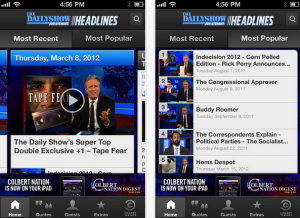 Similar to the Daily Show’s previous app, fans can watch clips from Jon Stewart and his “Best F#@cking News Team Ever” (which barely beats out TechCrunch’s Best Awesome News Team Ever), while sorting through those video clips by popularity and “most recent”. Users can also browse through archives, view a schedule for the week’s upcoming guests and read up on their bios, visit their website, buy music/content directly, or explore random quotes from past broadcasts.

Another cool little feature is that the app enables users to set TV tune-in reminders — which you can find this in the “Guests” tab — along with the ability to jump into the show’s different segments, like “On Topic,” “The Daily Show in :60 Seconds,” and “Correspondents Explain,” all while sharing clips, videos, headlines, etc. on Facebook, Twitter, or via email.

Unfortunately, full episodes are not available in the app, and are instead only available for $2 a pop in iTunes. The app also loses one or two points for displaying pop-up ads in the footer — no word yet on whether they’ll offer an ad-free paid app — but all in all, for Daily Show fans it’s a great resource to have. Also helps that it’s free.

Find the app in iTunes here.