Finding a place for your pooch while you’re away should be getting easier. Rover, a Seattle-based startup that is trying to disrupt the kennel market, said it has raised $3.4 million in a round led by Madrona Venture Group. It’s one of several startups that are vying to be the online marketplace for pet owners that need a sitter or a place for their dogs to stay when they’re out of town.

“This addresses a real, concrete problem,” said the company’s chief executive Aaron Easterly. “There are more dog-owning households than households with children in the U.S.”

Easterly said that kennels or pet hotels are often too pricey to be reasonable. It can range from being about $30 a night to upwards of $80 or 90 at higher-end places. Plus, they might charge extra for walks or playing fetch.

“It’s a pretty wild scenario, but you could end up paying $100 per night. The existing commercial solutions fail 90 percent of the market,” Easterly said. “Then there’s this untapped skilled labor force that loves to do this.”

Madrona was an easy pick to lead Rover’s round because of the company’s unusual history. The idea for the startup actually came from a Madrona managing director, Greg Gottesman, during a Seattle Startup Weekend after he had a terrible experience with a commercial kennel. Gottesman later found Easterly, a former general manager of network strategy and monetization at Microsoft, to run the company. CrunchFund is also participating in the round.

With the funding, Rover plans to roll out to more locations. The company already has a presence in 500 cities and has about 10,000 active members. Rover partners closely with dog care professional organizations to find qualified sitters. Rover’s revenue share starts at 15 percent, but it can go lower to about 3 percent.

“We filter and vet base all of the sitters,” Easterly said. “Only a minority of people who want to become sitters actually get displayed and put on the site.”

Rover faces competition from companies like DogVacay out of Los Angeles, but Easterly is mostly concerned about the bigger market out there and getting pet owners to consider more than just using kennels or their neighbors and friends. 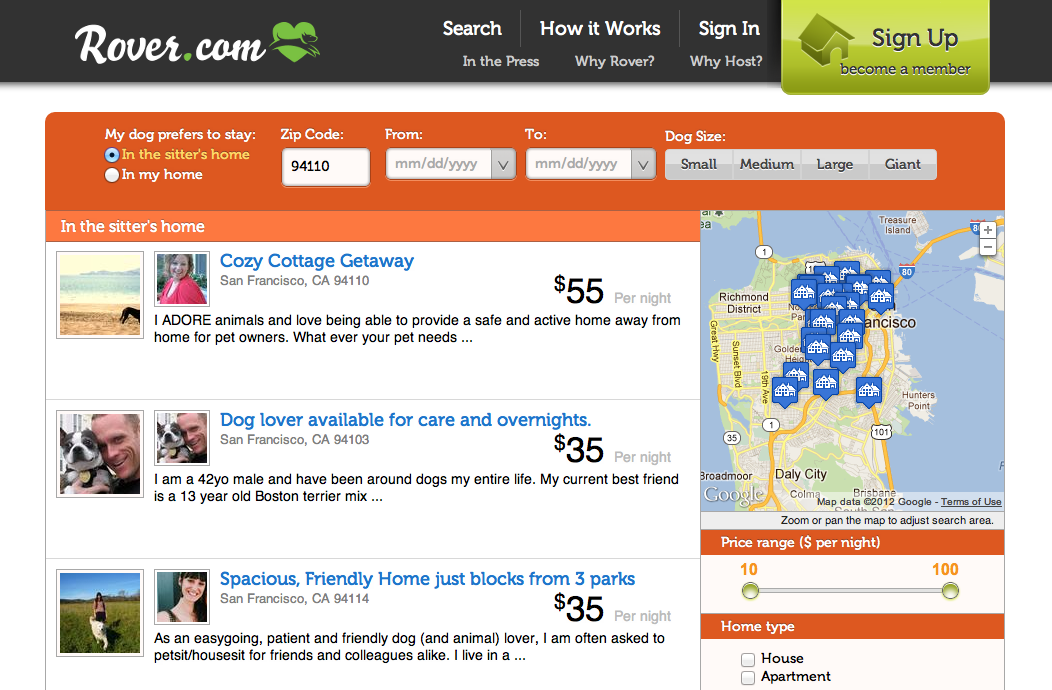