Patent blogs were lit up after the Supreme Court’s decision in Prometheus v. Mayo. Some have hailed the decision as a “harbinger of progress to come” while others have denounced it as revealing “just how little the Court understands the nuances of science, philosophy and language – let alone the patent law itself.” Describing the decision as “controversial” is probably an understatement.

The opinion focused primarily on Section 101 of the United States Patent Act, which sets out the basic categories of patent eligible subject matter. The statute is short and sweet: “Whoever invents or discovers any new and useful process, machine, manufacture, or composition of matter, or any new and useful improvement thereof, may obtain a patent therefore …” So simple, right?

Obviously not. Interpreting Section 101, Courts have consistently held that abstract ideas, natural phenomena, and laws of nature are not eligible for patent protection. Courts have also (less consistently) held that mathematical algorithms are either abstract ideas or laws of nature. Software is essentially composed of mathematical algorithms. Thus, the judicial interpretation of Section 101 could decide, once and for all, whether software patents are valid. If you’re serious about software patents, you read Prometheus v. Mayo with bated breath.

The case: Prometheus Labs patented a test to identify the appropriate dose of thiopurines, a class of drugs used to treat gastrointestinal disorders. The problem with thiopurines is that at levels too low the drug is ineffective, while at levels too high it is toxic – even worse, different people metabolize the drug differently.

Although scientists knew that levels of blood metabolites were correlated with effective treatment, Prometheus discovered the specific range of this correlation and patented a test that basically involved (1) administering thiopurine drugs and (2) determining whether the concentration of blood metabolites fell within a specified range. Mayo Labs purchased these tests from Prometheus for some time, but eventually went in-house, developing and marketing its own test. None too pleased, Prometheus filed suit against Mayo for patent infringement.

I know what you’re thinking. What does any of this have to do with software?

It turns out that software patents have tormented the Supreme Court for years. In 1978, the Court first refused to grant patent protection to a mathematical algorithm, but then in 1981 held that a process having novel elements, which included software, could be patented if the software was tied to a specific machine. As Professor Menell of U.C. Berkeley put it, “Coming during the first decade of software’s ascendancy, the [prior case law] produced more heat than light in applying century-old patent jurisprudence to an amorphous, rapidly developing field of technology.” Well said.

In 1998, the Federal Circuit ruled that software by itself was patentable, without need for any specific machine, so long as the invention produced a “useful, concrete, and tangible result.” That all changed in 2008, however, when the Federal Circuit displaced this “tangible result” standard with the “machine-or-transformation test” (call it “MoT” for the sake of brevity). MoT provides that a claimed process is patent-eligible if (1) it is tied to a particular machine or apparatus, or (2) it transforms a particular article into a different state or thing.

The Supreme Court affirmed this decision, but noted that MoT was not the exclusive test of patentability, although it was “a useful and important clue, an investigative tool.” Since then, most lower courts have continued to rely on MoT in evaluating software patents, having little else to guide them.

That’s unfortunate because MoT fails, hard. And this failure is partially to blame for the present – somewhat ridiculous – state of the patent system, where startups essentially ignore prior patents (far too many to review anyway) and large companies stockpile and cross-license nearly worthless patents to protect themselves from patent trolls that are likely gunning for them.

My favorite example of MoT shortcoming is the infamous “Method of Exercising a Cat,” which consists of directing a laser pointer in the vicinity of a cat, then moving the laser pointer “so as to cause the bright pattern of light to move in an irregular way fascinating to cats, and to any other animal with a chase instinct.” Judges have remarked that this patent could satisfy MoT because “the sedentary cat becomes a fit feline” – it involves both a transformation (the physical properties of the cat) and a specific machine (the laser pointer). 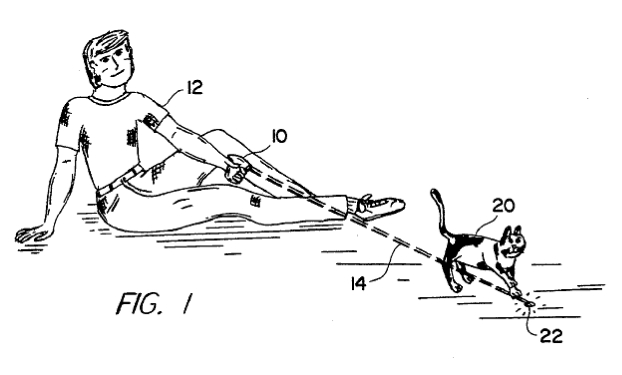 Much more ink could be spilled laying bare the many faults of MoT, but you get the idea. MoT is supposed to limit patents to technological or industrial processes, it has been fashioned as a gatekeeper, a threshold analysis if you will. The fundamental problem is that MoT allows the tail to wag the dog (or cat) by focusing on whether a new invention is “tied to a particular machine” or “transforms a particular thing” rather than the invention itself.

Courts seemingly cannot do any better. This reflects the immense difficulty of creating an effective “gatekeeper” test that draws conceptual circles around categories of technology that are rapidly changing and says definitively, as a threshold matter, what’s in and what’s out. Instead, we need an approach that is focused directly on the invention, its practical application, and whether, if patented, it would stymie further discovery by precluding the fundamental building blocks of innovation. This is what Section 101 is really about.

Back to Prometheus v. Mayo: Given these problems, many hoped the Supreme Court would provide some much-needed guidance in applying Section 101. Wishful thinking I suppose. The highest court ultimately decided that the metabolite correlations themselves are laws of nature and that Prometheus did not “add enough to the correlations to allow the processes they describe to qualify as patent eligible.”

The Court reasoned, “If a law of nature is not patentable, then neither is a process reciting a law of nature, unless that process has additional features that provide practical assurance that the process is more than a drafting effort designed to monopolize the law of nature itself.”

What would be “enough” to make the processes patent eligible? What “additional features” would provide the requisite practical assurance? The court doesn’t say. While the word “enough” was helpfully italicized in the court’s opinion, italics alone do not add clarity to otherwise vague, amorphous standards. Although we can applaud concern over monopolization of natural laws, simply saying that Prometheus did not add “enough” to these laws is basically useless.

The court also notes that “the steps in the claimed processes (apart from the natural laws themselves) involve well-understood, routine, conventional activity previously engaged in by researchers in the field.” These steps do not include, as the court remarks, “an ‘inventive concept’ sufficient to ensure that the patent in practice amounts to significantly more than a patent upon the natural law itself.”

So, besides the correlation between metabolite levels and effective treatment (which is an unpatentable natural law), there is nothing “inventive” about the test developed by Prometheus; really they were just trying to patent an underlying law of nature.

The court should not be sneaking the Section 102 analysis into a Section 101 inquiry. In fact, in that 1981 case I mentioned earlier, the Supreme Court specifically said, “the ‘novelty’ of any element or steps in a process, or even of the process itself, is of no relevance in determining whether the subject matter of a claim falls within the [Section] 101 categories of possibly patentable subject matter.” See, all bad.

The take away point is that the Supreme Court didn’t give us what we needed; in fact, it probably made things worse from a doctrinal standpoint. This is especially true because the opinion supports the view that Section 101 is a threshold inquiry that must be decided before any analysis under Sections 102, 103, or 112. That the court nevertheless sneaks Section 102 principles into its Section 101 inquiry is telling – it’s telling me that the threshold approach isn’t a very good one.

Despite all this, there is some encouraging language at the end of the opinion:

Patent protection is, after all, a two-edged sword. On the one hand, the promise of exclusive rights provides monetary incentives that lead to creation, invention, and discovery. On the other hand, that very exclusivity can impede the flow of information that might permit, indeed spur, invention …

That’s something we can all agree on. It also shows a willingness by this Supreme Court (the decision was unanimous) to think about principles of patent law from a policy perspective. Perhaps we’re seeing a shift in that direction, with more focus on the invention, its practical application, and the effects of patents on further discovery. That is, after all, what Section 101 is really about.

The other possibility is that the court is punting to Congress. In the penultimate paragraph, the court says, “And we must recognize the role of Congress in crafting more finely tailored rules where necessary.” I won’t hold my breath.

Daniel McKenzie is a California attorney. He graduated from Stanford in 2004 and advises various entertainment startups in addition to an active private practice in the northern San Francisco bay area.