Editor’s note: Pokin Yeung founded two startups, GeckoGo and Askomatics, and is currently blogging and helping out various other startups. Follow her on Twitter @pokin.

Just over a month ago, a random conversation with another startup founder over lunch turned into a full-blown research project.

“You and I are both first-born children,” I mused to my friend, “I wonder if that had any influence on why we chose to start businesses.”

I theorized that first borns were often given more responsibility growing up, and wondered if this role served as training wheels for building startups. I also wondered if our upbringing had an influence on things like when we start, what we start, or how much money we raise — and ultimately, how successful we are with our businesses.

Four weeks, a survey of 318 founders, and a lot of data-crunching later, here are my conclusions:

Startups run in the family

The data suggest that your parents can shape your inclination to become a founder – especially if your mom was an entrepreneur and you’re a girl. Female entrepreneurs are 1.4 times more likely to have a mom who was also a founder. Over 50 percent of our founders surveyed have a parent who had also started a business, and 14% of respondents have a brother or sister who’s taken the leap. So it seems having a good role model matters — especially for females. Organizations like Women 2.0 are a good start, and more access to mentorship programs during the formative years could make a big difference in bringing more female founders into play.

Higher education or trial by fire?

Startup founders have to do a lot of multi-tasking, but two things that don’t seem to mix are school and startups. Most founders tend to wait till school is done before starting their first business. In general, by the time founders are 25

Also, 50 percent of you waited till after 30 to start your first business if you had a graduate degree.

How else do you compare against the population? For starters, you overachieve.

Startup founders in general tend to overachieve. You are 6.4 times more likely to have skipped a grade, and 6 times more likely to start some sort of business endeavor (selling candies, anyone?) while still in school. Across the board, startup founders are more likely to more likely to do things like play sports, play a musical instrument, or hold a part-time job while still in high school. Maybe it’s a desire for learning, general well-roundedness and drive for growth that creates the motivations for founders to strike out on their own? Or maybe it’s a curiosity about the world. Lots of potential theories and areas of further research.

The specific circumstances that push founders to take the leap definitely involves more than the sequence in which founders arrive to their families, but it does seem clear that once you become a founder, you stand to quite strongly influence future generations to come.

There were other interesting areas of research, including the types of adversity faced by startup founders growing up, and it’s what I want to dig into next. If anyone is interested who didn’t participate in my study before, I’d love to ask you some questions here. 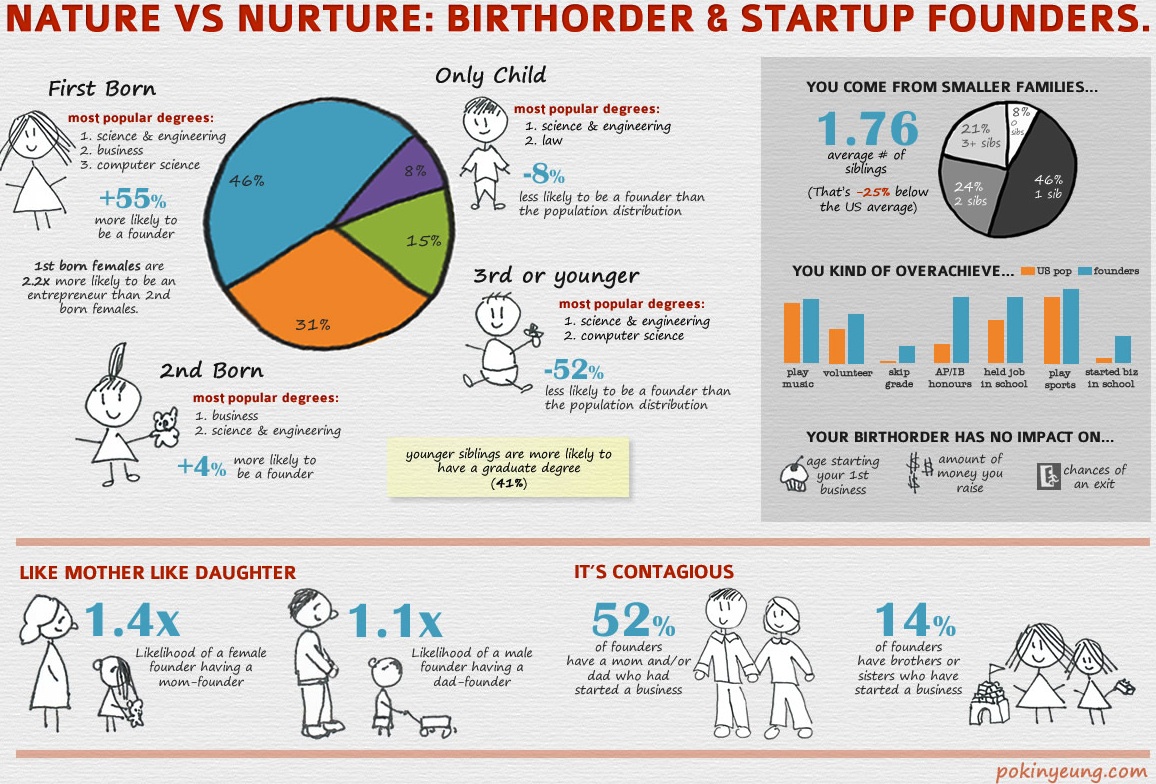