For anyone who’s loved to watch Twitter reactions or a liveblog of a big event on TV, this may come as no surprise. And for advertisers and broadcasters who haven’t figured out how to make use of this fact, you are missing a trick: we are fast becoming a culture of people who love to use devices like smartphones and tablets while watching television.

According to the latest study from Nielsen covering Q4 2011, in the U.S., a full 86 percent of tablet owners and 88 percent of smartphone owners said that they used their devices while watching regular TV at least once in a 30-day period. Nearly half (45 percent) actually did this on daily basis with their tablets, with 41 percent saying they watched TV while tapping on a smartphone every day.

But what’s perhaps surprising is that, while sites like GetGlue and Twitter have capitalized on the idea of social streams coinciding with TV viewing, Nielsen says the most popular activity is actually checking email, with the second most-popular activity being related to checking content related to the program or products being advertised around it.

In the UK, the numbers were equally high — although not as high — as the U.S. Among British consumers, 80 percent used tablets and 78 percent used smartphones while watching TV in the last month. On a daily basis, Brits were nearly just as addicted to tablet/TV combo use as Americans, at 24 percent.

Interestingly, although past studies from Nielsen have revealed that Italians and Germans are pretty big on using their smartphones and tablets for consuming other content — they scored high in paying for news, for example — when it comes to TV mutlitasking, they say, “no” and “nien.” Some 29 percent of consumers in both Italy and Germany said they never use a tablet while watching TV, and 34 percent said they never use a smartphone. 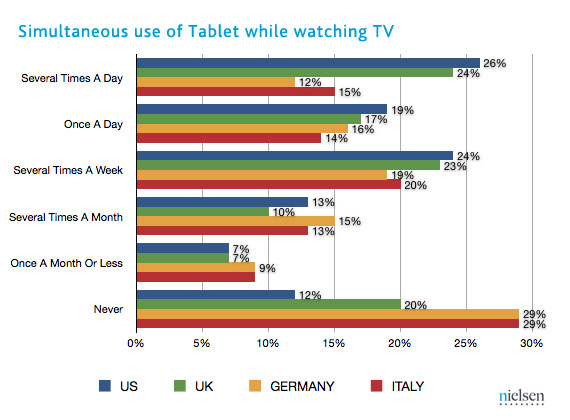 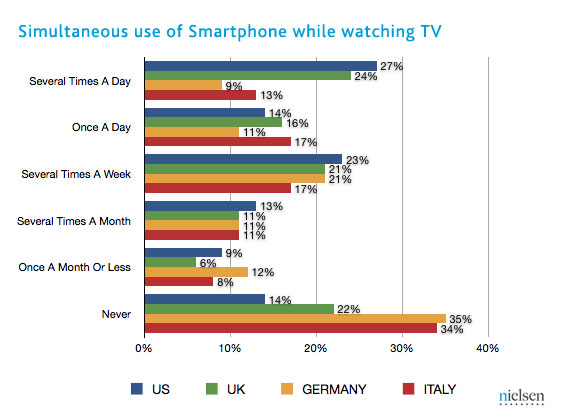