Why cut coupons when you could just click them? Following a successful trial at SXSW, the world’s largest online coupon site RetailMeNot is planning a roll out of its paperless credit card-linked coupons this summer with several nation-wide retailers. Saving money is as easy as visiting RetailMeNot, entering your credit card number, and selecting discounts to load onto your card. Then when you pay with that card online or at a brick-and-mortar store, the discount is automatically deducted from your total.

The CardSpring-API backed feature could be massively disruptive because it’s so much easier and less embarrassing than cutting and redeeming traditional offline coupons. It’s also great for merchants, since rather than paying to print coupons, businesses only pay RetailMeNot a commission when discounts are redeemed.

There are so many things wrong with how offline coupons work. You have to rifle through Sunday papers or snail mail to find them. Then you have to stuff them in your wallet or purse or remember to bring them when you visit a store. Lose them or miss ones for your favorite store? Tough luck. Plus you often can’t use offline coupons online or vice-versa.

Redemption sucks too. It slows down checkout and it can be embarrassing to ask the cashier to pinch pennies off your total. At restaurants you might have to declare your coupon before you eat, and trust me, you won’t do while on a date because you’ll look like a cheapskate. 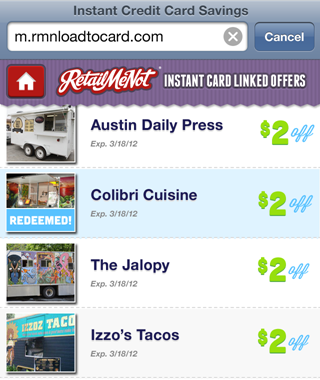 Credit card-linked coupons solve all of these problems. You’ll occasionally visit RetailMeNot via web or mobile to search or browse a complete list of discounts for ones you want to add. After that your purchase behavior is exactly the same as usual, with automatic redemptions occurring silently and appearing on your receipt. There’s a mobile app for loading coupons to your card while on the go (or right before you purchase), and shoppers can even set up alerts about new discounts of their favorite stores.

RetailMeNot’s CardSpring API system is secure because you don’t enter your expiration date, security code, or billing address. And unlike offline discount provider Plink, you don’t have to go through the hassle or worry of providing your online banking username and password. That’s because RetailMeNot’s partnership with First Data lets it check your credit card history for purchases where you’ve loaded discounts.

RetailMeNot’s test at SXSW that let people sign up for $2 off one of many Austin food trucks proved popular. The company shared data with TechCrunch showing that 6,000 people visited the “What The Truck?” promotion site, and over 500 people signed up. Fifty percent of those that registered silently redeemed the discount by paying with their credit card (probably via Square), which then appeared on their receipt. That’s an impressive conversion rate for an unfamiliar discount service.

This summer RetailMeNot will launch an expanded beta test with half a dozen nationwide retailers, some of whom have already signed on. Because there no embarrassment during redemption, it’s also working to get big restaurant chains to join in. The pay-for-performance commission model ensures that businesses only pay RetailMeNot when the card-linked coupons help drive a sale. The system could grow into an important revenue stream for RetailMeNot, which was acquired in 2010 by the $300 million-funded WhaleShark Media whose discount discovery sites receive 300 million visits a year from the U.S. alone.

Even if in the future you pay via Square, Venmo, Google Wallet, or another NFC system, your payment will probably still be processed through your credit card number, so RetailMeNot’s card-linked discounts will still be applied. The CardSpring API could also be used to load loyalty programs and rewards right onto your credit card. Coupons won’t disappear, but the printed version could the next dead-tree business to go up in smoke.