Today, a company called BodeTree is launching a new web-based solution to help small business owners make better sense of their financial data. Like another new startup in the SMB realm (that being InvoiceASAP), BodeTree is also leveraging QuickBooks to help import data into its service, but instead of focusing on online invoicing and payments, BodeTree wants to provide business owners with a real-time dashboard view of their financials, plus access to detailed reporting and analysis.

But wait! Don’t fall asleep yet! BodeTree is actually kind of interesting, despite existing in the relatively boring financial software space. Even CEO Christopher Myers agrees. “It’s a big challenge to make something that’s really boring and unsexy to be fun,” he says. For what’s it worth, with BodeTree, he may have just accomplished that.

The first thing you’ll notice about BodeTree is its looks. The cloud-based application, a 2011 Intuit App Finalist, creates a colorful, but uncluttered, online dashboard with a number of at-a-glance metrics that help you get a sense of where your business stands. One of the biggest, is the BodeTree guy, sitting under the window called “Business Enlightenment.” 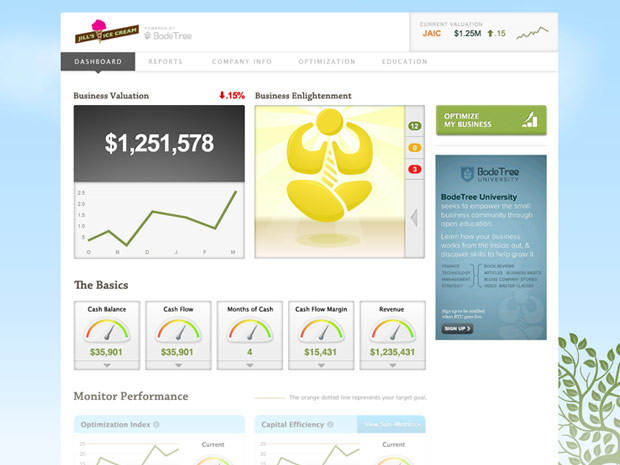 “It’s kind of a joke, and a play on the whole concept we have with the name of BodeTree. We want to be this Zen-like, easy-to-access place of enlightenment,” explains Myers. “We kind of say it tongue-in-cheek,” he admits.

The Enlightenment Score, however, is kind of cool. It takes a look at everything in the business, including how you’ve performed historically, what your forecast looks like, how you’ve performed relative to your goals or strategy, how your peers are doing, etc. and then gives you a score. You can click on it to see the specific areas you need to improve. But the score is not really a number – it’s a visual score.

The BodeTree logo guy himself is the “score” – he and the background change colors related to the current status of the business. Shining and yellow means things are good, rainy and green means it’s time to take notice, grey to black and things are bad.

It’s one of those cute, clever little features that seems almost hokey at first, until it actually works. (“Oh, my guy is green? Better find out what I can do better.”)

In case it wasn’t clear, BodeTree was designed for regular people, not accountants or other financial experts.

The service also includes a feature that generates a number of financial reports, including one that compares your business to that of the competition on several key data points. When you’re creating reports, the process is almost overly simple – there are big buttons you click on to designate who the report is for – an investor, your bank, an attorney, accountant, etc. Adding or removing pages to or from a report is as simple as checking a box, too. 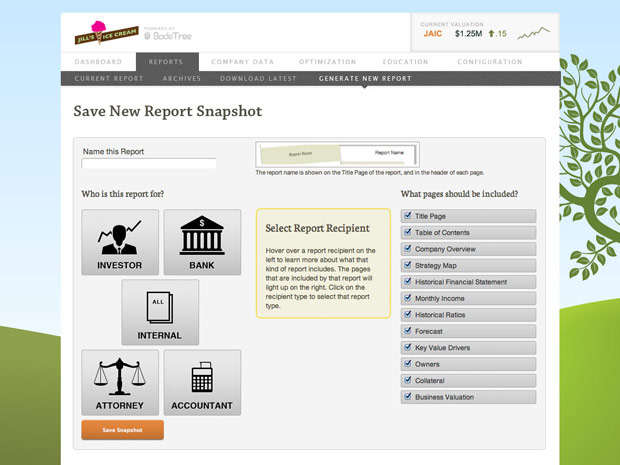 But Myers says the most exciting feature is the optimization option. On the dashboard, you click a green button to be taken to a page that has sliders on it which help you identify the key value drivers in your business. Here, you can see your performance relative to others in the industry and what your valuation is. As you adjust the sliders, you can see immediately how making changes in a few areas could improve your company’s overall value.

It’s important to point out that none of this data is canned or generalized. BodeTree knows about your business strategy from the get-go thanks to its introductory quiz which walks you through a series of multiple choice questions about your business. Its proprietary algorithm then puts together a full strategy map for your business based on those answers.

“When I was at Apollo, which owns University of Phoenix, we would hire consultants from all sorts of big consulting houses. They would charge us $2 million and walk through this same process and ask these same questions,”  he says. “I was having beers with one of the guys who used to work with them, and we were kind of joking that you could simplify 90% of what they do down to a couple of questions. So that’s what we ended up doing.”

Those top consultants, who charge $250/hour, may not be the direct competition for what BodeTree does now for just $250/year (or $24.99/month). Low-end consultants are. And maybe the makers of more complex, more expensive financial software programs.

“But our main competition is actually not doing the work,” says Myers. “Look, this type of thinking, this type of analysis is within reach. It’s easy. It can be done and you can really see great results in your business. You just have to do it. I think a lot people don’t do it because it’s so challenging typically.”

The company was founded in early 2011 by Myers and co-founder Matt Ankrum, and has been bootstrapping its way to launch. The service is free for thirty days, if you want to try it out for yourself.