As the dust settles after Zynga’s purchase of New York mobile social game developer OMGPOP, the company is visibly taking on a new shape. A 25% larger and more mobile one. That’s the percentage growth of its total daily active user base, when you add in the 14.6 million people playing mobile sketching app Draw Something to its existing 55 million players.

The game has gone from 1.7 million to 14.6 over the month of March, based on app tracking service AppData. Today, it’s nearly the combined size of Zynga’s two biggest hits on Facebook, CityVille and Texas Hold’em Poker.

Which means Draw Something’s share of the market is likely to grow in the coming months. CityVille was launched at the end of 2010, and Poker years before. Zynga has milked them along, and will no doubt continuing doing so far into the future. But, they’re never likely to grow significantly beyond their current sizes, based on the overall life cycle of these games. 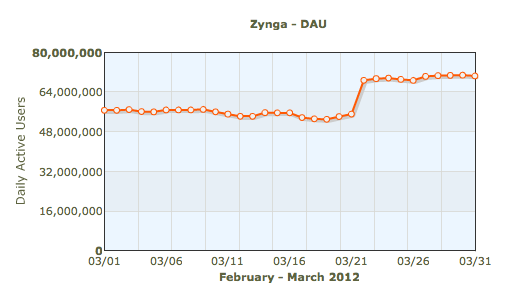 Draw Something is a blank slate. It’s been out for around two months, and could keep growing. Zynga has the analytics and marketing skills to help with that. And it also has the experience keeping traffic up across its games on social and mobile platforms. Its core mobile franchise to date, Words With Friends, has the second-most daily active users out of any Zynga game, with 8.1 million daily actives.

The user count comes with a caveat here. Only Zynga knows the non-deduplicated daily unique user number. It’s quite possible that users of other Zynga games are already playing Draw Something, particularly with Words With Friends. That’s still good, in that they might be paying for virtual goods across titles. But it also means the total traffic is lower than it looks here.

The big long-term potential isn’t just that Zynga has all these users from this game. It also has the ability to promote its other games, including any it’s planning on launching in coming months, to this vibrant user base. That could extend the value of the game far beyond its own cycle.

The $210 million bet on OMGPOP has the obvious risks, too. The acquired company has never made a hit even close to this big. And Draw Something may have a shorter life cycle — Zynga hasn’t had a chance to see how long this type of sketching-sharing game can stick around.