In the debate over whether there can ever exist “another Silicon Valley” and where, exactly, it would be, add in another contender: Skolkovo, an ambitious high-tech sprawl being built outside of Moscow, which this week announced the latest two companies to invest in its big idea: Cisco and Bessemer Venture Partners.

Bessemer has promised investments worth $20 million over the next two years into startups that are resident at Skolkovo, while Cisco has dedicated an unspecified part of a $1 billion injection it is making into Russia over a number of years to build an R&D lab in the area — part of big push from the government to take some of the technology know-how that Russia has been producing for decades and give it a significantly more commercial spin.

The Bessemer investment means that there are now more than 30 VCs that have committed to putting money into Skolkovo-startups. (One happens to also include Cisco, working with Russian VC Almaz.)

As a result of the agreement, Bessemer will get “priority access” to the Skolkovo Foundation project pipeline (not clear whether that will be over and above access by other VCs). It will focus on seed and Series A investments; and it will be able to potentially bring some of its own portfolio companies into Skolkovo. Its portfolio companies include the cloud-services company Parallels and group-buying club KupiVIP.

(Being resident at Skolkovo, which you get after applying and being accepted by the foundation, gives a startup financial support in the form of possible grants, but also a place to work and operational support.)

Just as Bessemer is joining a group of VCs, Cisco is not the first big IT company to pump money into the Russian tech ecosystem. HP has its HP Lab near St. Petersburg, and IBM, Nokia, Siemens and around 100 others have all signed up to invest in Skolkovo’s IT cluster (other clusters include biomedicine, energy, space technology and nuclear technology).

It’s still early days, so Cisco’s aims are suitably ambitious in their scope at this point: “Cisco aims to focus R&D in Skolkovo on high-impact areas of the business, including video and internal start-ups, using Skolkovo as the physical and virtual platform for innovation,” Cisco says. “This will contribute to transforming Skolkovo into one of the most advanced technology regions in the world.” Specifically the investment that Cisco has now committed will be used to build out a center on the Skolkovo campus and run an R&D operation there, as well as continued funding for training and education programs.

That speaks to another point: since Skolkovo was announced in 2010, not a whole lot has come out of it in terms of actual product while the building of it gets underway. Even so, people seem mostly positive that projects like this are the right step forward to improve the IT and tech economy in the country.

That’s because before Skolkovo, Russia didn’t have much in the way of an R&D environment as it exists in a place like Silicon Valley: in a throwback to Soviet days, R&D had been based on institutes and had “no 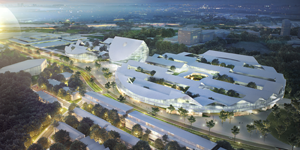 commercial element,” said a spokesperson for Russian search giant Yandex. And at the same time, a lot of investment money and talent has been exported abroad, whether in the form of investments in Facebook, or Russian engineers contracted to work for startups elsewhere.

Some worry that having the government back the effort with millions of state money makes it potentially less stable: “As long as Skolkovo is supported by the government, it is viable,” one founder told me. “What if government changes its mind, or if there is a budget deficit?”

Others see the entry of all these international companies, like Cisco and Bessemer, as a route to leveraging that risk. “Yes, Skolkovo is pretty ambitious, and there is some political coloring because of the connection to [Russia’s President] Dmitry Medvedev, but now he’s moving this into the hands of private businesses, and that’s the right decision,” said the Yandex spokesperson. “Sooner or later those businesses will ask for an ROI.”

Yandex, it should be pointed out, is one of the many other routes to getting funding and building out tech companies. It doesn’t have any involvement with Skolkovo itself but it has its own R&D operation as well as its own incubator, Yandex.factory. Its latest investment was a seed round in Israel-based GBooking, focused on IT services for small businesses.