Decide.com, the consumer electronics search service launched by several former Farecast engineers, is expanding its focus today to home appliances. Previously, the service told users whether they should buy now or wait to purchase consumer electronics like cell phones, tablets, desktop and laptops.

But according to Decide CEO Mike Fridgen, home appliances share much in common with CE devices, in that their prices are similarly volatile – on any given day prices on appliances change by 12%, he says. These fluctuations – precisely the kind of data that Decide.com likes to crunch – were one of the reasons why it made sense for Decide to attack this new vertical.

For those unfamiliar, Decide.com is a search engine of sorts that tells you whether or not to purchase a gadget, computer, or now, an appliance, that you have your eyes on. Created by Farecast’s former VP of Marketing and Product Development, Mike Fridgen, as well as Farecast co-founder, now Decide CTO, Oren Etzioni, the engine is somewhat reminiscent of their first product Farecast, which told consumers the best time to buy a plane ticket. That company was later acquired by Microsoft for $115 million.

Now at work on tracking pricing and product changes in other industries, the team is using their expertise to develop new techniques for analyzing different sorts of market fluctuations. Decide doesn’t just compare current prices and availability for the products it watches, as a shopping portal would, it also knows of product release cycles, historical trends, company announcements, news and rumors published by the media, and more. All of these items come into play when Decide makes its “buy” or “wait” recommendations.

With home appliances, prices are constantly changing, making them an ideal target for Decide’s algorithms. When prices change on appliances, explains Fridgen, 50% are price increases and 50% are price drops. The average drop is 10% and often goes as high as 25%. For consumers, this could translate into significant savings when shopping for high-dollar items like new refrigerators, washers or dryers, for example. 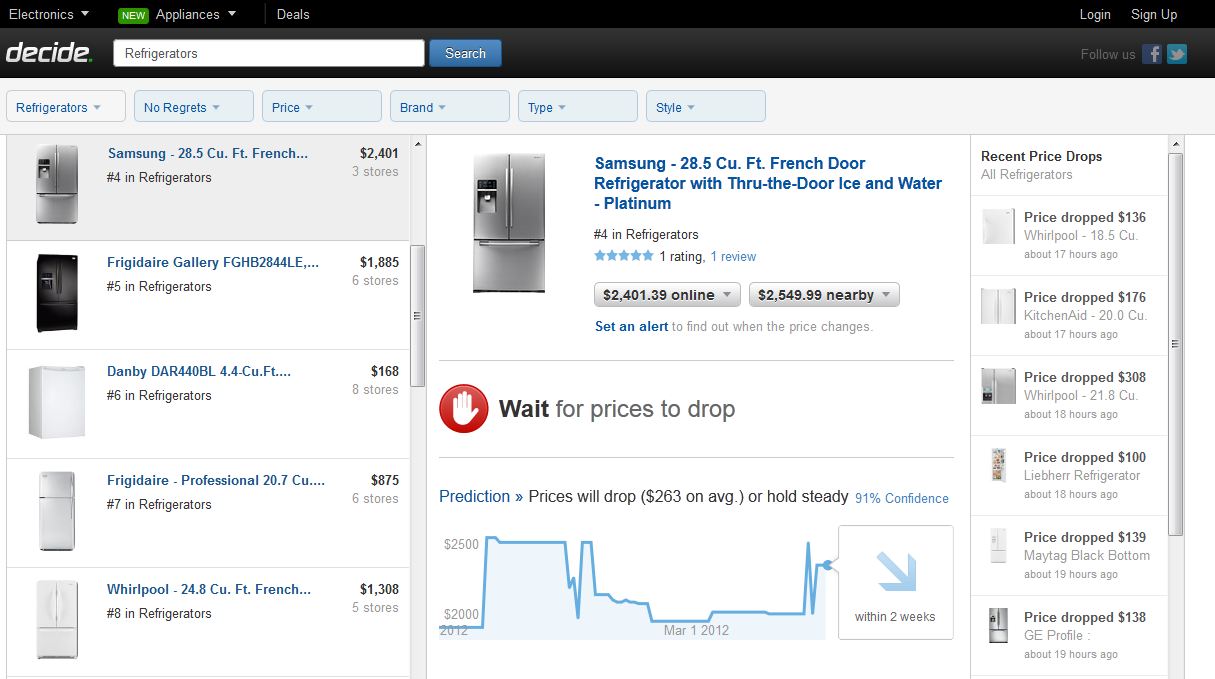 To date, Decide has provided consumers with millions of recommendations, saving people roughly $54 on average, says Fridgen. The company also has mobile applications on iPhone and Android, an plans to release an iPad app early next month. The iPhone app was recently featured by Apple, and received over 100,000 downloads within its first 90 days of availability (Metrics for Android were not given, however.)

A couple of weeks ago, the company also released another feature which could soon have increasing importance: a “what to buy” feature. As the “what” is often subjective (just ask iPhone or Android users about that), the company is starting in just one area – camera recommendations based on product specs, but that also factor in price stability among other things.

With today’s expansion to appliances, Decide.com has refreshed its website to feature both categories of consumer goods right on the homepage.

Decide raised $6 million in Series B funding a year ago, bringing its total raised to $8.5 million. Investors in the most recent round included Maveron, Madrona Venture Group, Google founding board member Ram Shriram, and former Expedia CEO Erik Blachford.