App developers want to make kick ass applications that users want to download, and — let me go out on a limb here — they also want to make money. Monetizing apps can be tough, but with a more complete picture of how their users are interacting with their app, the opportunities to bring in more revenue become clearer — as does the way to better user experiences. Back in November, we covered Appboy, a startup on a mission to enable app developers to expand, engage, and better understand their user base — and, in turn, make more money.

The New York City-based startup had just closed a $1 million round of seed funding, led by Blumberg Capital, with participation from Metamorphic Ventures, Accelerator Ventures, Bullpen Capital and T5 Capital. Today, the company is announcing an additional $1.5 million in follow-on seed funding led by the very same cast of investors.

Why the quick follow-on investment? According to Appboy CEO Mark Ghermezian, the startup’s private beta tested its platform with 40 developers, and those developers represented several million users from over 12 different countries — and multiple different categories in the App Store. And that’s the key, the CEO says, that its platform tested well with developers with sizable user bases, providing some early validation that the platform could indeed be scalable and category agnostic.

As to some background for those unfamiliar: Appboy is building an integrated management platform for mobile app developers, including a user-facing mobile SDK and an online dashboard for developers. Simply put, the SDK can be quickly integrated into host apps, allowing developers to provide CRM tools, encourage social sharing, run social campaigns, and more easily cross-promote their apps. Through the dashboard, app developers can share news and alerts with users, view analytics, manage their social media presence, and reply to feedback from end users.

Appboy’s dashboard combines both internal metrics with that of third-party providers like Klout, Facebook, and Twitter. The end goal here is to give app developers a sense of just how valuable each of their users are, so that if they’ve just submitted feedback, taken part in a promotion, or posted to your Facebook wall, the dashboard will automatically include info on their usage statistics and sharing history, including information from third parties about their interests, behavior, and social influence.

Allowing developers to manage their Facebook and Twitter presence from the dashboard is a new feature for Appboy, and enables them to push news and alerts to social networks as well as the “in-app news section” of the Appboy SDK. This obviously puts Appboy squarely in the realm of social CRM tools, and along with the news of their new funding, Appboy is also announcing that it is adding Hootsuite CEO and co-founder Ryan Holmes to its advisory board. 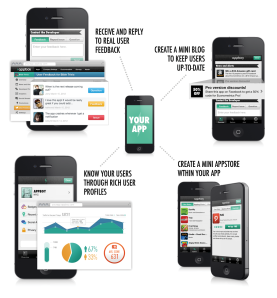 For those unfamiliar, Hootsuite is a popular social media management platform for businesses that lets users manage campaigns across multiple social networks from one dashboard. As Appboy brings social CRM management to mobile app developers, CEO Mark Ghermezian tells us that he thinks having Holmes on board can be a big leg up to help the company define what works and what doesn’t when it comes to managing customer relationships on social networks.

When we first covered Appboy in November, the startup was just entering private beta. Today, along with its new funding, the team is opening up its public beta. Developers can register for the Appboy SDK here.

Appboy remains iOS-only at this point, but in the next couple of months, the CEO says, Appboy will be using its follow-on funding to accelerate its arrival on Android, along with releasing some advanced CRM tools for app developers, as well as monetization options through cross-promotion. In regard to this last feature, Appboy is planning to do this through CPI and CPC, as it builds distribution among users through the apps integrating its platform, as well as through a “Sponsored Apps” feature within the “Explore Tab” of its SDK.

And, of course, last but not least, Appboy is also also ramping up hiring.