What if you won prizes for getting Likes on Instagram, listening to songs on Pandora, or making Highlight connections around town? Today Kiip expands its real-world rewards platform to allow giveaways in any type of app, not just games. Since Kiip-client brands pay developers to promote through them, today’s launch will give lots of devs a new way to monetize without traditional display ads.

In an exclusive launch with TechCrunch, Kiip is kicking off its utility app rewards by helping Pepsi surprise users of fitness apps including MapMyRUN, Nexercise, LoloFit and Gym-Pact with free Propel Zero Enhanced Water. Soon Kiip will formally support other app verticals, but with its new self-serve platform developers of all sorts can start hacking rewards into their apps right now. 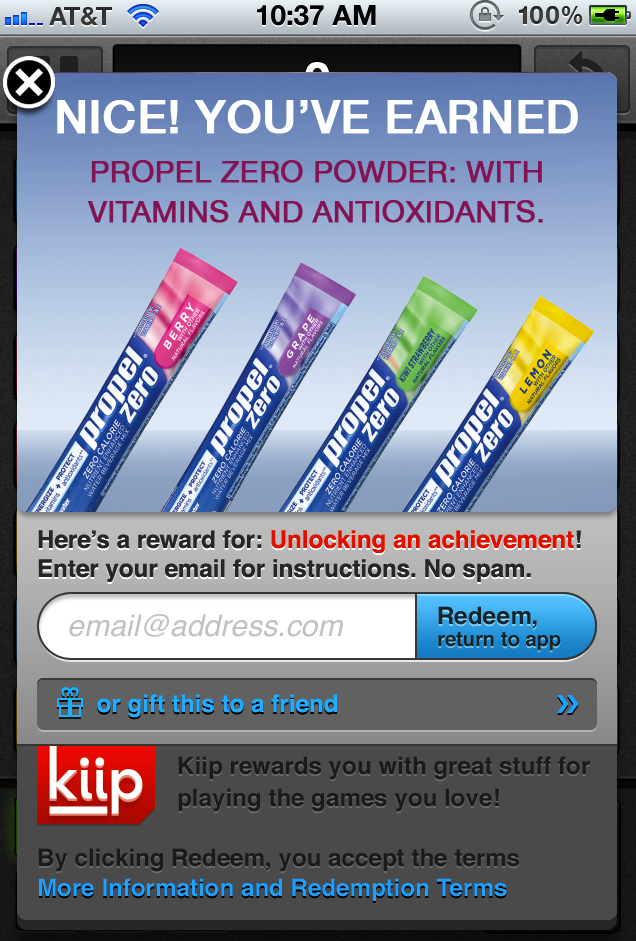 Here’s how the rewards work for the fitness apps and others. Brands sign up with Kiip to offer rewards, which matches them with apps that have integrated its platform and whose users fit the brand’s target demographic. When users of these apps achieve something, such as logging a run of over 1 mile, Kiip will sometimes display an overlay congratulating them and letting them enter their email address to redeem a reward. Once they fill out a form in an email, they’re sent product samples like free bottles of Propel, gift cards, or contest entries.

Kiip’s platform has been a big success. It now reaches 30 million users across 140 apps and has 100 more apps in the pipeline. That’s up from just 10 games last April and 65 in December when it launched high score tournaments for big prizes. Now offering about 5 rewards per second, an average of 12% of users that see the prompts are filling in their email address.

20-year old founder Brian Wong tells me Kiip didn’t have to spend much of its $4.3 million in funding to bring the platform to utility apps.  “Achievements are bigger than games. These moments are universal. We realized it would take very little work to adapt the model.”

I’m pretty jazzed to see what developers will start rewarding people for. Education apps could hook students up with school supplies for getting answers right. Networking apps like Bump could monetize by distributing travel coupons when you meet people. Hell, Instagram could use Kiip to give away photo prints and finally start making some money. Why show traditional mobile ads that users hate when you could sweeten the medicine with some free swag?