Discovr, the company behind what’s still one of my all-time favorite mobile app discovery tools, Discovr Apps, is out today with a new application for finding people. Not surprisingly, it’s called Discovr People. The startup, which also has apps in the Music and Movies verticals, is not trying to compete with the trendy “ambient location”/people-stalking apps hitting the scene as of late (like Highlight, Sonar, Glancee, Banjo, etc.), but instead is providing more of a Twitter-based people finder, not unlike the Berlin-based Flockofbirds app.

When you first launch Discovr People (iOS only for now), the app asks you if it can access your Twitter accounts. Say yes, and you’re off.

[Note to app developers: this is how social integrations should be done on iOS – stop asking for my Twitter username and password already.]

If you’re familiar with Discovr Apps, the new People app works the same way. The interface involves an interactive map showing a network of connected people, the way that Discovr Apps shows you apps related to the one you’re viewing. To start using the People app, you first type in a Twitter user’s name, and out pop spokes connecting them to the people they’ve tweeted with most recently.

The algorithm here is a bit of a mystery. The company says that it tracks your “recent” conversations across Twitter’s network of 140 million active users, but in my early tests, the results it displayed were odd at times. In my case, for instance, it displayed some who I tweeted with ages ago as well as some who I wouldn’t even call close Twitter friends. Maybe we conversed a bit lately, but I wouldn’t call them “regulars,” exactly. Other results were more on target.

When I entered in @TechCrunch’s username, however, the people results were more promising. Here, it was able to surface some, if not all, of the TechCrunch staff, including both writers and editors. It’s a good place to start, at least.

The company tells me that the “recent history” it’s referring to is not defined to a certain length of time, as it depends on how much a user tweets. If you tweet a lot, for example, it will be days or weeks. If you don’t, it will be longer – like months. People are shown as connections only if they have been actively talking to each other, which is different from how Twitter makes its own recommendations (a function based more on similarity).

There’s other secret sauce, of course, and the algorithm is always being tweaked, too. 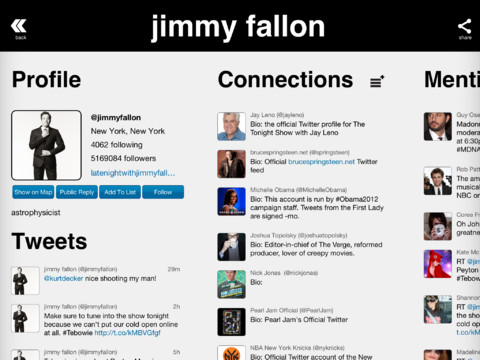 After the initial network is displayed, you can then tap on any one of the connections to then see their related “spokes” expand outwards. You can also tap and hold for quick access to the Twitter bio and a button to follow/unfollow the user as you see fit.

Twitter, a network based more on people’s interests than on real-world connections like Facebook, has always faced challenges in helping people find other users they would want to follow. It has attempted to solve this problem in a variety of ways, including through the use of suggested people lists and category suggestions upon first sign up, suggested people presented to users in their Twitter profile, and, more recently, with updated mobile apps that invite you to “Discover,” meaning follow the popular trends happening across the service – another vector for finding people tweeting about things that may interest you.

Discovr People is not at all a panacea for the “who to follow” challenge Twitter faces, but it’s a worthy enough third-party complement to Twitter’s own in-house tools as well as those provided by other external developers. It’s also kind of fun for Twitter people-stalking purposes, if you’re into that kind of thing.

The new app is available here on iTunes for $0.99. Sorry, Android users, but Discovr says the time is still not right for it to move to that platform.

Discovr previously raised $1.1 million in seed funding, led by Australian VC firm Yuuwa Capital. Discover says its code base (which is used across all apps) just hit 2 million downloads as of last night.