The term “Facebook friend” has swelled beyond your real-life friends to encompass judgmental professional contacts, creepy relatives, and people you met once. Acquaintance List suggestions manager means you can friend whoever you want, and Facebook will make it easy to shut up whoever you don’t stay in touch with and keep your feed relevant.

To use the feature, visit your Friends interface and select the Acquaintance list. You’ll see suggestions in the sidebar that can be added with one click. Select “See All Suggestions” or click this “Too much stuff in your news feed?” link and to access the manager and instantly prune whole swaths of people Facebook thinks you find boring. They’ll never know you added them to the list, they’ll still be your friends, and if you find yourselves reconnecting you can always take them off.

Facebook launched Acquaintance lists amongst its Smart Lists in September last year. The Close Friends, nearby, and coworkers lists were designed to help you see more of people you do find interesting, and suggestions were based on people who were mutual friends of other members. Acquaintance Lists do the opposite, and the suggestions are based on people you rarely message, wall post, Like, or comment on. 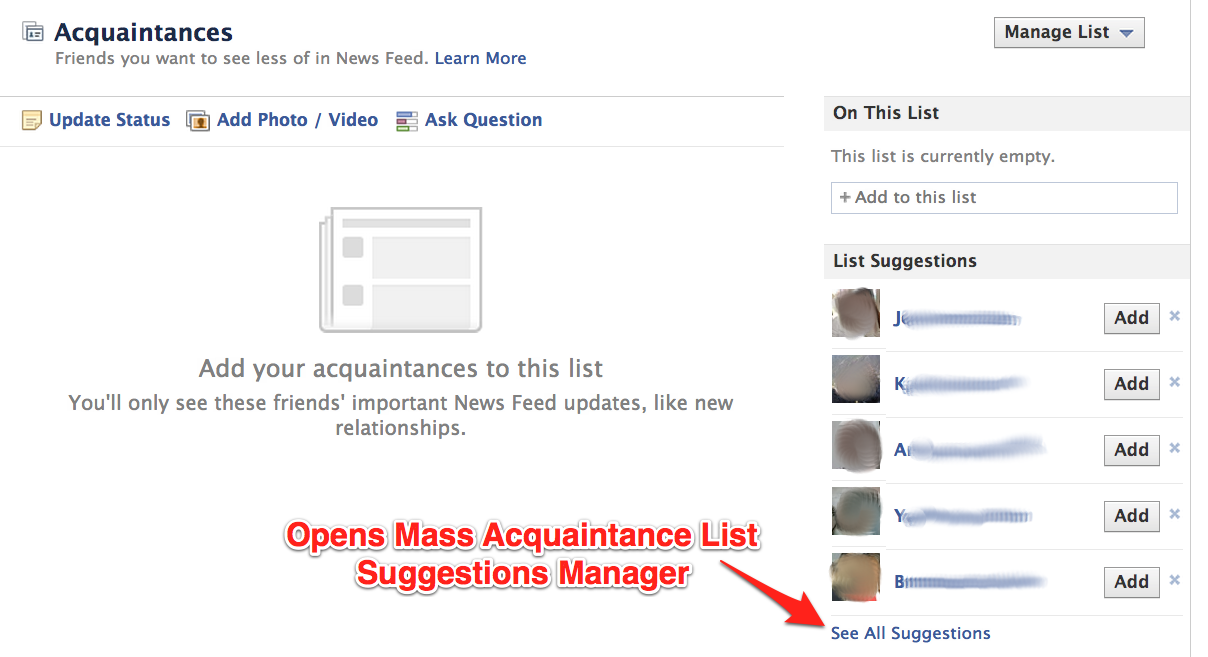 This Acquaintance List suggestion manager is currently buried deep in the interface so it’s not likely to get much use as is. Facebook could shine light on the useful function by including a “See Less From This Person By Adding To Acquaintance List” or a similar option to the drop-down that appears when you try to hide an individual post from the news feed. That drop-down does currently let you unsubscribe from a friend or select to only see their “important posts”. [Update: When you hide someone from the news feed or mark a post as spam, Facebook actually shows a “Use Acquaintances to organize who you see in feed” with a link to the suggestion manager.]

An “unselect all” button on the manager would also be useful for when Facebook gets overzealous and asks you to Acquaint-ify your real friends.

The ballooning Facebook social graph is a common complaint that leads people to use the service less. It’s also contributing to the success of micronetwork Path where friend count is limited to 150, not 5000. If Facebook can get users curating their Acquaintance List with help from the suggestions manager, it could make the site feel more relevant and intimate again without making users choose which friend requests to accept.