Online ticketing platform Eventbrite is making a big push towards reaching $1 billion in gross ticket sales in 2012; after doubling both the number of events on platform in 2011 (458,207 events in 2011) and tickets sold last year (20,798,509 tickets sold in 2011). In 2011, the company sold $400 million worth of tickets, which is double the $207 million it did in 2010. To reach that $1 billion and expand sales, last year Eventbrite debuted the beginnings of the new Eventbrite Box Office. Traditionally, Eventbrite tickets are sold online, which means that people who decide to spontaneously show up at the door can’t use the platform. In December, the company launched the Eventbrite ‘At the Door’ iPad app, and today the company is debuting the complimentary credit card reader to allow event organizers to collect ticket payments on the go.

Called the ‘At The Door Card Reader,’ the lightweight, plastic device is just under two inches long and fits into the iPad’s dock connector port to allow users to swipe credit cards. The device, which is the company’s first piece of proprietary hardware, is orange and rectangular.

The reader itself makes collecting spontaneous payments on the go fairly easy. But the beauty of the new device is how it works with Eventbrite’s companion iPad app. The app and reader aim to offer a complete box office, at the door solution for event organizers. With the app, you can swipe an attendees card, and obtain their email, name and other information for further use. Event organizers can also factor all the last-minute ticket sales into total sales data from an event.

The ability to capture and track important data from on-site sales is important. By accepting payments via the At The Door app and card reader, organizers will have a full, comprehensive picture of their sales data captured through the Eventbrite platform – from both on-site sales and online sales data. This capability gives organizers powerful visibility into the behaviors and preferences of their attendees, as well as an easy way to stay in touch with them.

Eventbrite says the platform features optimized checkout flow that allows the application to process 400+ transactions per hour. And the reason the reader is connected to the iPad’s 30-pin adapter (instead of the headphone jack) is for a more efficient credit card read. The app and reader also features cash drawer reconciliation and wireless integration with the Star TSP143 printer for tickets and customer receipts. This printer will be available for sale here.

Additionally, Eventbrite says that because credit card encryption is done on the reader itself, all card data transmitted through the iPad is fully protected.

The credit card reader will be available in Eventbrite’s new online store, Brite Store, for $10, but this amount will be automatically reimbursed in the purchaser’s Eventbrite account. Event organizers will be charged a 3 percent fee for all transactions as well as a service fee. To celebrate the launch, Eventbrite is waiving service fees on transactions made through At The Door—only credit card processing costs will be applied. 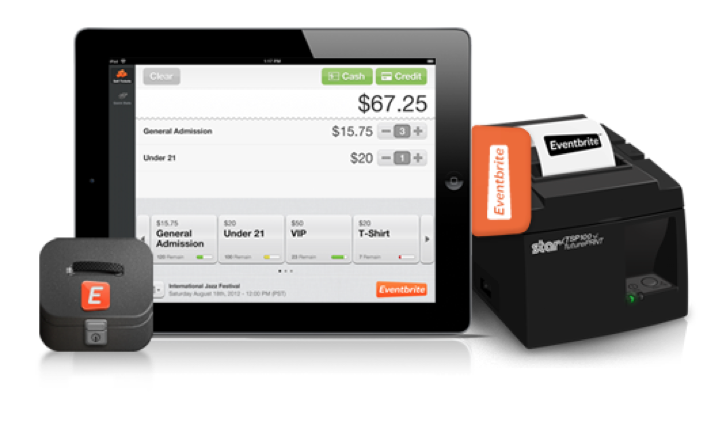 Prior to launch, Eventbrite says that the At The Door app was tested successfully with several large, high-profile events, including Meatopia, The Orange County BBQ Festival, and the IFPDA Print Faire. And the At The Door Card Reader will be part of the mobile box office solution for the Governors Ball Music Festival—taking place on Roosevelt Island June 23-24, in New York City.

This could be a huge money-maker for Eventbrite. The company’s VP of marketing, Tamara Mendelsohn, tells us that at many large-scale festivals, half of the people attending are walking up giving cash. And event organizers have no idea who these people are or how to get in touch with them in the future.

Eventbrite CEO and Co-Founder Kevin Hartz explains, “At The Door transforms an off-the-shelf iPad
into a paradigm-shifting tool for managing sales for events. We’re essentially taking the devices that are proliferating among consumers and transforming them into perfectly-tailored tools for event organizers, at no cost, and with greater impact than anything previously available.”

Hartz has said that the new platform is akin to Opentable terminals at restaurants. Interestingly, Eventbrite will start competing with other mobile payments readers, such as Square, which have been frequently used for at the door payments for fundraisers and other events.

But Eventbrite says they eventually would like to partner with Square and other companies for the card swipe readers, but are waiting for APIs to be released.

It should be interesting to see how often the reader is used, and if the new complete box office platform will help increase sales for the company. The addition a of a reader and comprehensive box office platform does make sense, and the iPad is an ideal device to use for event organizers.

This year, $1 billion in ticket sales would translate into roughly $50 million in revenue for the company. Currently, Eventbrite has raised $80 million in funding from Sequoia and others but still has $60 million left in the bank. The company also expanded internationally last year, opening an office in London.

And we know the company is eyeing an IPO. Last year, Hartz said that Eventbrite could file to go public as early as late 2012.

Checkmout Hartz speaking to Chris Dixon below in this Founder Stories episode from last year. 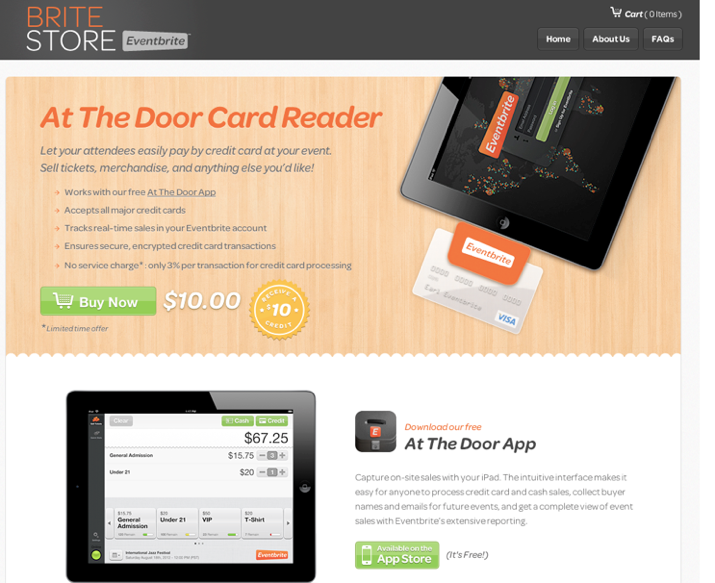 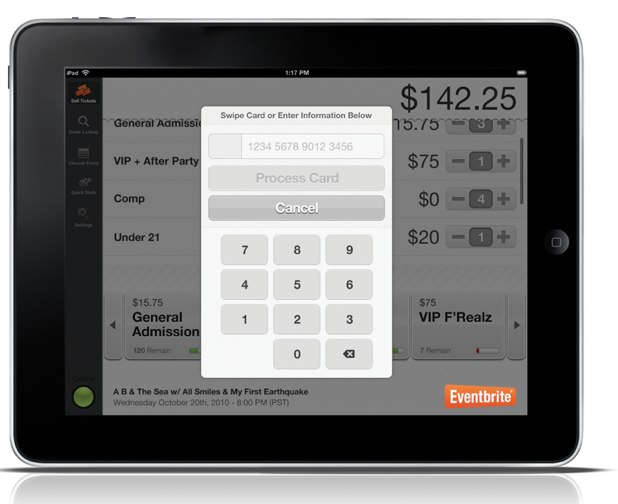