Maps have been around for millenia, but for a significant chunk of that time, they remained static, two-dimensional forms, rendered by hand on paper. It sounds crude now, even as services like Wave have us mapping our worlds with our smartphones like explorers of old. Today, with the ridiculous amount of data available on the Web and in the cloud, maps have become something else entirely, our surroundings coming alive in wizbang, interactive 3-D displays.

Throw in the level of granularity online maps are capable of, even on mobile, and your once-enthralling lists have become boring — bordering on analog. Google Maps is a feat in and of itself, but, again, with the wealth of data now available online about local businesses, their hours of operation, menus, websites, deals, and the ability to interconnect all of them based on location, I’ve been waiting for a smart, visual aggregated service like CityMaps.

For those unfamiliar, CityMaps transforms the cities of New York, San Francisco, and Austin (with more to come by year’s end) into block-by-block grids plotted with nearly every local business out there in an effort to help both natives and newcomers navigate their city. What’s cool about CityMaps is that not only does it include all these local storefronts (from restaurants to dry cleaners), it gives users the ability to mouse over them to see the business’ latest tweets, reviews, menus, hours of operation — even offering daily deals available in realtime based on location (with deals showing up as colored dots).

The DealMap was one of the first startups to really nail the plotting of daily deals on an interactive map, and unsurprisingly the startup was scooped up by Google last August. There are plenty of awesome deal aggregators out there, but CityMaps wants to be the next generation, the ultimate aggregator not only of location, local business, and deal data, but also of social data, adding another few layers to the interactive map experience. 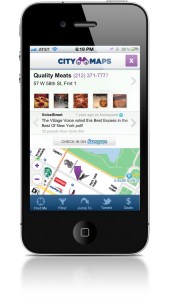 Of course, striving to become a meta aggregator means that there’s plenty of opportunity to over-do it, to create a cluttered UI and a disappointing UX. But last week, CityMaps emerged from beta with a cleaner design and a new mapping engine that reduces most of that concern. Users can now see tips and photos from Foursquare, browse deals in realtime, or use Facebook Connect to see social data along with tweets from local businesses refreshed every hour.

The startup also released its iOS app, which brought the services to mobile for the first time, meaning that users can now click on businesses to make dinner reservations via OpenTable (pretty handy), buy movie tickets, find Foursquare deals from local merchants, read reviews, and look up the next BART or subway departure time — from the Web and on mobile. CityMaps Co-founders Elliot Cohen and Aaron Rudenstine tell us that an Android app is on its way in the next month or so, as is an iPad-specific app. The latter in particular will be huge, as the map experience can be a little condensed on the iPhone, which will hopefully result in an awesome user experience when customized for the iPad.

Just as Waze and OpenStreetMap are trying to offer Wikipedia-style, crowdsourced map experiences, this was the original inspiration behind CityMaps, said Cohen, whose background in real estate and urban planning convinced him that the Web was in dire need of a map that went beyond deals and directional navigation, something that combined a virtual representation of a city with White pages business data and friendsourcing. It’s certainly the intersection of a handful of much-buzzed about trends in technology, as every big tech company tries to get a piece of the SoLoMo pie.

And that last piece is really significant, because while services like Yelp, Foursquare, and Google (in about 5 different products) offer various pieces of this, Foursquare is still thought of as a check-in service, Yelp a reviews service, and Google Maps as a directions-providing tool. That gives CityMaps plenty of room to be free from pigeonholing and to define itself as a mix.

My recent experience with Yelp’s mobile app has left a bad taste in my mouth, with slow map rendering and loading, and a reduced user experience. That being said, Yelp offers some of the bast filtering functionality out there in mobileland, allowing local business discovery by easy (sometimes slow-loading) browsing of proximity, price, or whether the service is open or not — and the co-founders assure us that this kind of drilling down is coming soon to CityMaps. 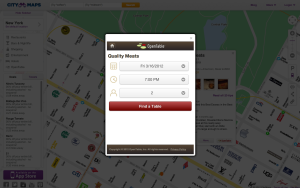 If it adds Google Street Views, more high-level filtering, and another important piece — a meta score for businesses which takes into account Foursquare and Zagat ratings, Yelp reviews, etc., giving the business one overall score, whether it’s based on stars or a number scale — this is going to be one killer business.

Which brings up the matter of revenue streams. It’s not completely clear how CityMaps will make money, it could charge businesses a small fee to fill out their profile page (although it’s doing that for free now), or amplify Twitter and Foursquare for marketing purposes, or do lead generation.

The service just came out of beta last week, so there’s time yet. CityMaps also raised $1 million in angel funding at the end of 2010, and is now officially announcing its $2.5 million Series A round, closed earlier this year. Investors include Dave Leyrer, a former VC, and Dave Levin, president of 360i.com and an angel investor.

The startup’s advisors include Neil Vogel, the co-founder of the Webby Awards and Netted.com as well as Zander Lurie, SVP of Strategic Development at CBS and a board member at SurveyMonkey. Both these advisors and its new infusion of capital will help the startup improve upon its Web UI and continue to add much-needed features that will put its UX above and beyond the other players in the space. But, in doing so, it will very likely become an acquisition target for one of the bigger players, if it isn’t already.

There’s a lot to be said for allowing people to experience a granular view of their city in a much more visual way than just listing points on the map. Building on this will be critical for the startup, as will it be to beef up its infrastructure, making sure that rendering and data processing stay at peak performance as it attempts to roll out into 25 to 30 cities by the end of this year (including a few international locations).

For more on CityMaps, check them out at home on the Web here and on the App Store here.