Editor’s Note: David McIntosh is the founder and CEO of Redux, a fast-growing video discovery company. Redux is the top downloaded app on Google TV, and grew 10x to 3.5M monthly users in 2011 with a “TV Everywhere” strategy as outlined below.

In other words, the Connected TV ecosystem today is in a similar place to the Android ecosystem in mid-2010. Players like Netflix have already built billion-dollar businesses on Connected TV – Nielsen found that over 85% of Netflix streaming customers use Netflix on their living room TV.

Traditional media companies like HBO, Internet businesses like Hulu, and new startups have taken note of Netflix’s example and are rushing to plant their stake in the Connected TV ground. But just as mobile represented a brand new opportunity governed by new paradigms, and Eric Schmidt famously declared Google to be a “mobile-first” company, a new crop of “TV-first” companies will take full advantage of users’ unique TV behavior:

1. Discovery is the dominant paradigm on Connected TV. This is in big contrast to the two paradigms driving the web – search and communication. The two largest web companies — Google and Facebook are driven by these two fundamental behaviors. But the vast majority of users turn on their TV without any intent — they aren’t planning to search for a particular piece of content or use their TV to communicate with friends. Instead, they’re engaged in channel surfing and looking for inspiration.

2. Fragmentation is a massive challenge. Rich Wong wrote a great piece on the challenge of fragmentation in the mobile ecosystem, and concluded that great mobile companies must devise solutions to fragmentation. But fragmentation is even more challenging in the TV space – TV experiences must span a diverse set of platform environments. In fact, one of Netflix’s core advantages over competitors is its ability to stream on nearly every connected device. Creating a consistent and uniform experience across hundreds of devices is a significant technical challenge. But it’s also a major competitive advantage. Companies that build products that can scale an incredible discovery and consumption experience consistently across hundreds of devices will have an unfair advantage.

3. Appetite for content on the TV is higher than on any other connected device. The average returning session time for Redux users on the TV is nearly one hour compared to 16 minutes for Redux web users – that’s more than a 3X difference on the TV: 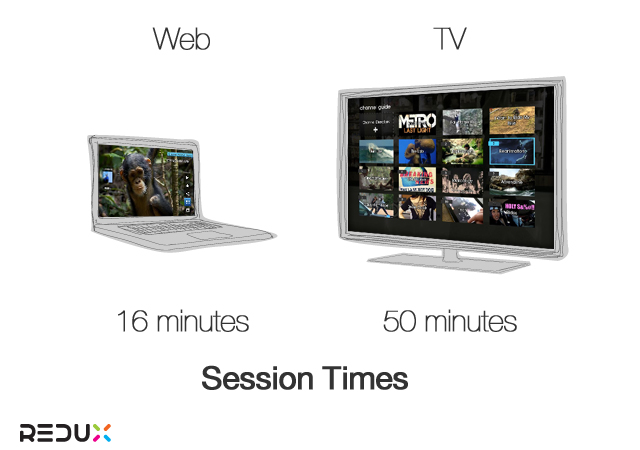 Additionally, usage on Connected TVs peaks on weekday nights and on weekends: 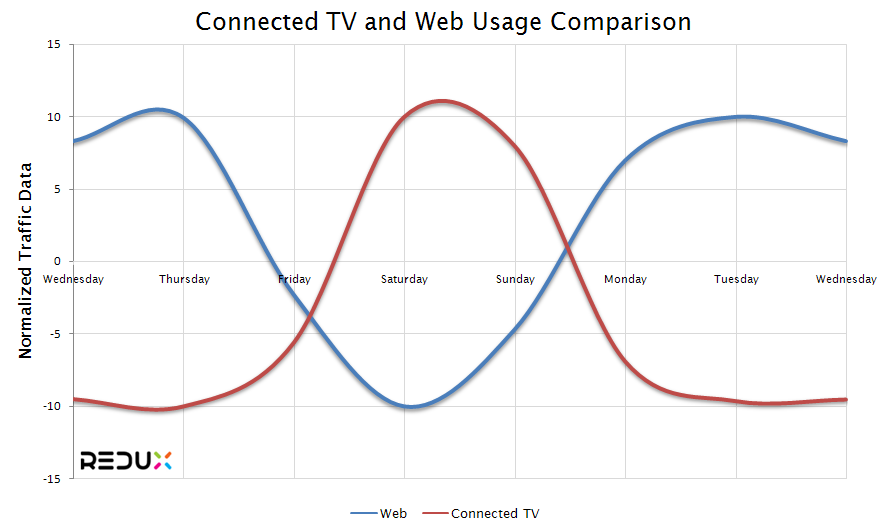 But the TV opportunity isn’t just limited to Smart TVs – every screen is becoming a “mini-connected TV.” Tablet users are increasingly propping the tablet up a few feet away and leaning-back to watch video for an hour without touching the device. If you ride the subway in Seoul, you’ll see about ⅓ of the passengers holding their phone in the palm of their hand and watching video for the entire length of the ride. The television experience is becoming ubiquitous.

And with technologies like Apple’s Airplay, mobile devices may push experiences directly to Connected TVs, or services like OnLive may render TV experiences in the cloud. But regardless of how the TV experience is delivered, it is defined by the paradigm of Discovery, just as search and communication define the desktop web experience. The winners in the Connected TV space will be a new crop of “TV-first” companies that will carve-up the TV opportunity by focusing on delivering delightful Discovery experiences.