Just in time for SXSW Music, Facebook has updated its Events interface. Admins can now create an event with less details, set privacy to friends-only, receive suggestions of who to invite and notifications when invitees confirm, and a more advanced wall lets invitees ask questions and more discretely decline invitations. The revamp could help persuade users to create an event rather than just inviting friends to a get-together via group messaging, further increasing the role of the feature at the annual music event.

Facebook Events engineer Bob Baldwin says the new invite features will make the experience “feel more similar to inviting someone via SMS/email and getting back their response”. With the rise of rapid feedback via group messaging, Facebook Events looked slow by comparison. This update will speed them back up.

Creating an event no longer requires a location. Admins can just add a name, date, and privacy setting to get started, and can fill in time and location later. Baldwin says “I think this works really well when you’re trying to plan something but aren’t sure of the location/time (ex “I want to see a movie with friends on Saturday”). So Events aren’t just for promoting, they’re a planning tool too. 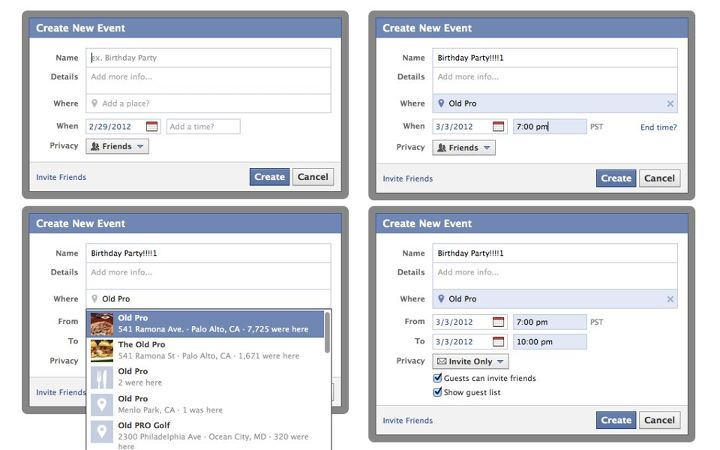 Similar to when you build Groups or friend lists, Facebook now analyzes who you’ve already invited and other factors (possibly location) to suggest who else you might want to include. These suggestions can be added with a single click. This will help prevent you from forgetting one friend from a close-knit set of buddies.

Multiple friends can now send you event invites so you know just how badly people want you there. Inviters receive notifications when their invitees confirm or decline, and admins can filter declined RSVPs out of the wall to make their soirees seem like the place everyone wants to be.

Event walls now function more like the Groups feed, so they show when someone joins, and comments on posts bump them to the top. You can ask questions and follow posts to get notifications, so when you ask what refreshments to bring you’ll know when the host replies ‘whiskey’. In a move that will help those with busy schedules, notifications can be turned off.

[Update: The small team behind Facebook Events still hasn’t created an official payment or ticketing system. This could be bolstering usage of EventBrite, which permits sales. If Facebook did one day create a ticket payment system or platform it would have to figure out how to do so without incentivizing event spam or unfairly favoring one payment service.]

Facebook Events have become standard for medium-sized private functions like birthday parties, but Facebook wants the feature to be flexible enough to handle ad hoc get-togethers and thousand-attendee productions alike. By making small events easier to set up, large events easier to manage, and the whole product less noisy, Facebook could widen the spectrum of what Events are used for. By getting more people out of house, the Events update could quiet the claims that Facebook isolates us from live human interaction.