If you’re in a band and you don’t know Onesheet, you should check it out. For those unfamiliar, Onesheet is, as its name would suggest, a one-page dossier for bands. We originally referred to (and have continued referring to) Onesheet as the “About.me for bands/musicians,” but that analogy is annoying in the way all tech media analogies are short-sighted — and also because it just doesn’t really fit anymore.

Case-in-point: Onesheet is today taking its show on the road, or more specifically, is translating its web experience into those small, mobile screens to give bands an opportunity to connect with their fans on-the-go.

Originally, Onesheet started off allowing bands to create aggregated, customizable profiles, verifying their identities through Facebook or Twitter to connect with third party services like Soundcloud, Bandcamp and ReverbNation — along with requisite social media services like Posterous, Tumblr and YouTube. Then, in January, Onesheet Founder Brenden Mulligan opened the site up to the whole entertainment industry so that filmmakers, actors, TV shows, movies, comedians, etc. could get in on the action.

He also added some more internal management, recruiting employees who cut their teeth at Digg, Columbia Records, RootMusic, MySpace, Warner/Chappell, and Groupon, and integrated a full suite of iTunes/AppStore/iBookstore widgets to that any user could sell music, video, apps, and books directly from Onesheet. Seeing as nearly every user on Onesheet has sold/is selling digital goods through one of those stores, that was a big step.

What’s more, if being a finalist for a Crunchie Award isn’t enough validation, in less than eight months, Onesheet has attracted 25,000 entertainment professionals, with the latest “big” artist to sign up being Michelle Branch. Since relaunching in January, the user engagement per page (time on site and clicks) has doubled, Mulligan says. And Onesheet users now collectively have over 200 million fans on Facebook and Twitter.

Meaningless vanity metrics aside, it’s true that the one big area where Onesheet has been underperforming (besides the ability to get bands signed, of course) has been mobile. So, today, the startup is rolled out its pilot program for “Onesheet Mobile,” which basically means the team has optimized the site’s experience for mobile devices. Sign up for Onesheet Mobile, and the service automatically generates a branded mobile app; but, importantly for musicians, that’s where the work ends. There’s no app to download; everyone who visits your page on a mobile device will see it. 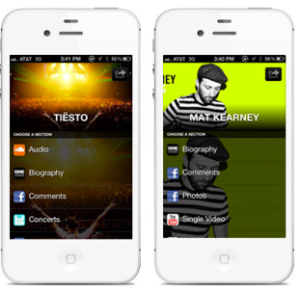 What’s more, if a visitor saves your page to their homescreen, it creates a mobile icon with your image, and when they launch the app, their screen is filled with your background image as the app loads. The one problem with Onesheet’s mobile experience is that some of the widgets the desktop site employs won’t render on a mobile device, either because of their size or because they use flash, which means that those widgets will be “grey-ed out.”

This is partly due to the lack of cross-platform flexibility on the part of the third-party companies themselves, partly because Onesheet hasn’t had time to optimize all of them yet, though Mulligan said they’re currently working with their partners to provide that content in a more mobile friendly way, which will be fixed on a rolling basis over the next few months.

Onesheet Mobile is a premium feature offered as part of the site’s premium, “Pro Package,” which will run you just under $5 per month. During the pilot, Onesheet has enabled all of its users to access their mobile-friendly pages for the remainder of the March. After that, you’ll have to cough up that five-spot.

So, there it is. Onesheet is beginning to connect the dots on mobile. For now, Onesheet is focusing its mobile offering on bands, but it will no doubt next bring mobile to the rest of the entertainment industry in the near future.

As to what’s next, after it nails mobile, Onesheet is going to focus on working with creatives to optimize their pages, helping them answer questions like, “what can I do to attract more fans, or increase engagement? Onesheet will also be homing in on metrics and providing bands with a better picture of how visitors are interacting with the different features of their pages.

Obviously, offering bands the opportunity to give their fans and followers a more seamless experience across platforms is huge, with mobile engagement becoming an increasingly important part of every business’ (let alone band’s) strategy. That alone could take them past MySpace. But, in the end, Onesheet Mobile still isn’t even close to the quality of native apps — it’s a mobile optimized web feature.

On the other hand, mobile web apps generally require tons of uploading and customization, and so Onesheet’s new mobile dress has the potential to be a huge time saver for bands that want a mobile presence but either can’t afford it or don’t know how to code it.

What the end-game is for Onesheet is still a little uncertain, but clearly in comparison About.me got lost in trying to define what it would be after its initial awesome one-page bio model took off. I don’t think Onesheet will have the same problem, however, and it will be interesting to see if the startup becomes an acquisition target for one of the larger music sites it already partners with, like Soundcloud. Although with its increasingly broad focus on the entertainment industry, that might not be a good fit.

Either way, it’s becoming a valuable platform for musicians (and creatives) alike. For more, check ’em out at home here. 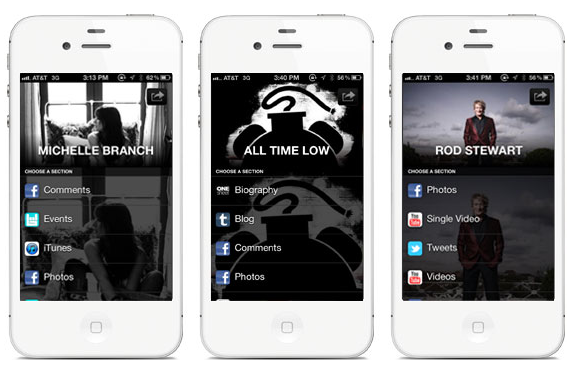