To publish a “review” of the Lytro as it is today is, in a way, very premature. But it’s also only fair. The product is shipping and, to an extent, complete. But given the number of features and planned improvements in the pipes, a review today will be obsolete in a few months. Nevertheless, an initial judgment on the device must be made.

So here is what can be said of the Lytro in a form that can only really be called a public beta.

A quick explanation is probably in order for people who have not handled the camera. The Lytro Light Field Camera lets you take pictures in which you can adjust the focus after the fact. It has two modes: everyday, in which you only control the zoom and shutter release, and creative, which lets you zoom more, focus closer, and control the depth of field more — but you have to manually tell it where to focus, which is kind of backwards for a device meant to remove the process of focusing from the equation.

The photos, or “living photos” as they call them, can then be transferred to your computer and uploaded to Lytro’s website, where you can then embed or share them elsewhere online.

We recently got to talk with Lytro founder Ren Ng and their director of photography, Eric Cheng, at an event in San Francisco. I cornered them for a few minutes to talk about the product and their plans for the future. 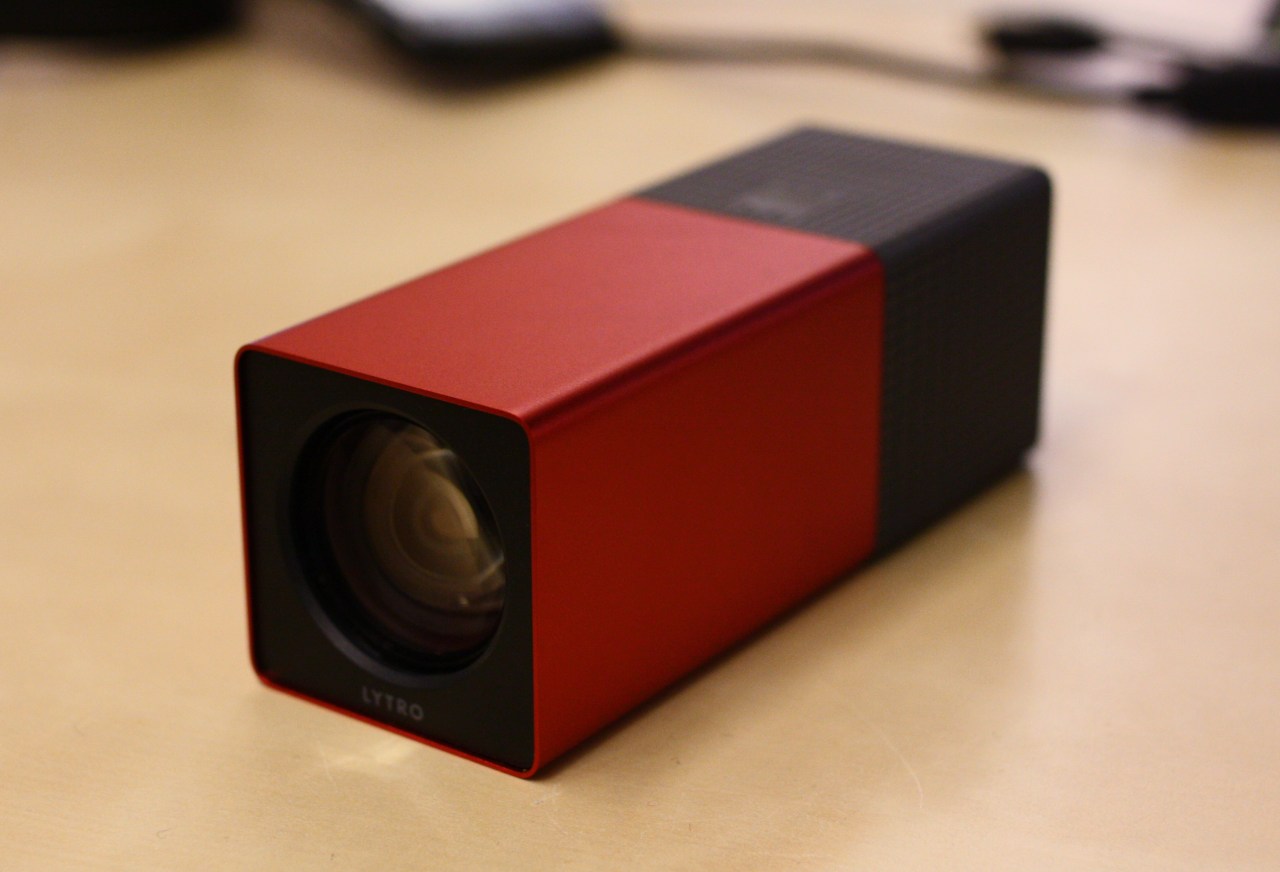 The designers of the Lytro camera itself should be congratulated for creating a device that is unique, functional, and attractive all at once. That’s not easy to do. The square-prism shape is strange at first, being unlike almost any camera on the market, but once you think of it more as a kind of telescope than a camera as far as handling is concerned, it’s quite natural.

The shutter button is easy to find and pleasant to activate; the touch-sensitive zoom area is responsive; the textured rubber finish is grippy and attractive; overall the feeling of the device is one of solidity and simplicity. It’ll survive a fall or a splash of coffee and look good doing it. 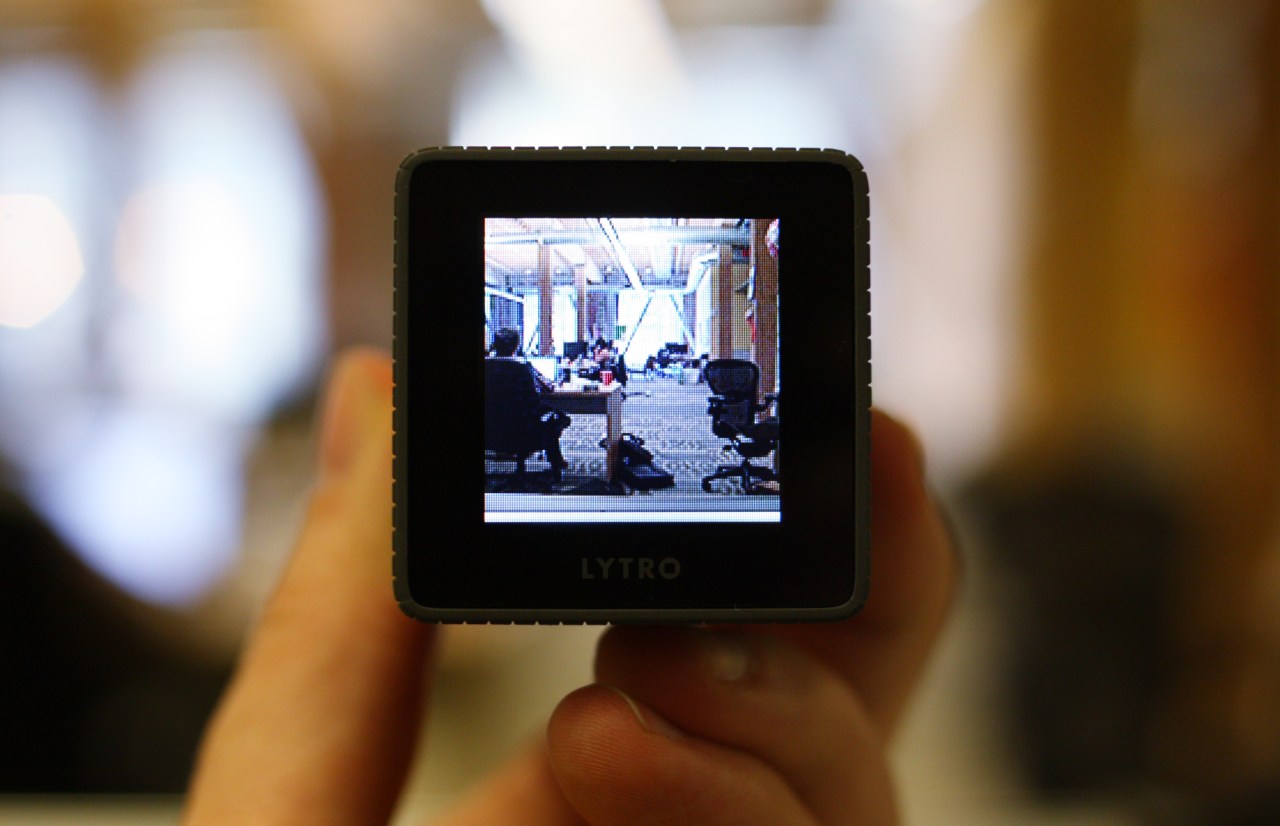 My main criticism hardware-wise is the screen. It’s extremely small and the resolution (hence sharpness and ability to display your photos properly) is poor. It’s responsive to touch, but it can’t display much and getting the focus point right in creative mode can be a pain. It’s also difficult to tell how your pictures turned out in playback mode: the screen often just isn’t good enough to display the nuances of the focus shift. Many times I thought I’d captured a good one only to be disappointed, though sometimes I was pleasantly surprised with the opposite, as well.

One other minor potential concern is that the grid in the rubber might fill with grit and grime over time, but it’s hard to say for sure, only having had the camera for short while. 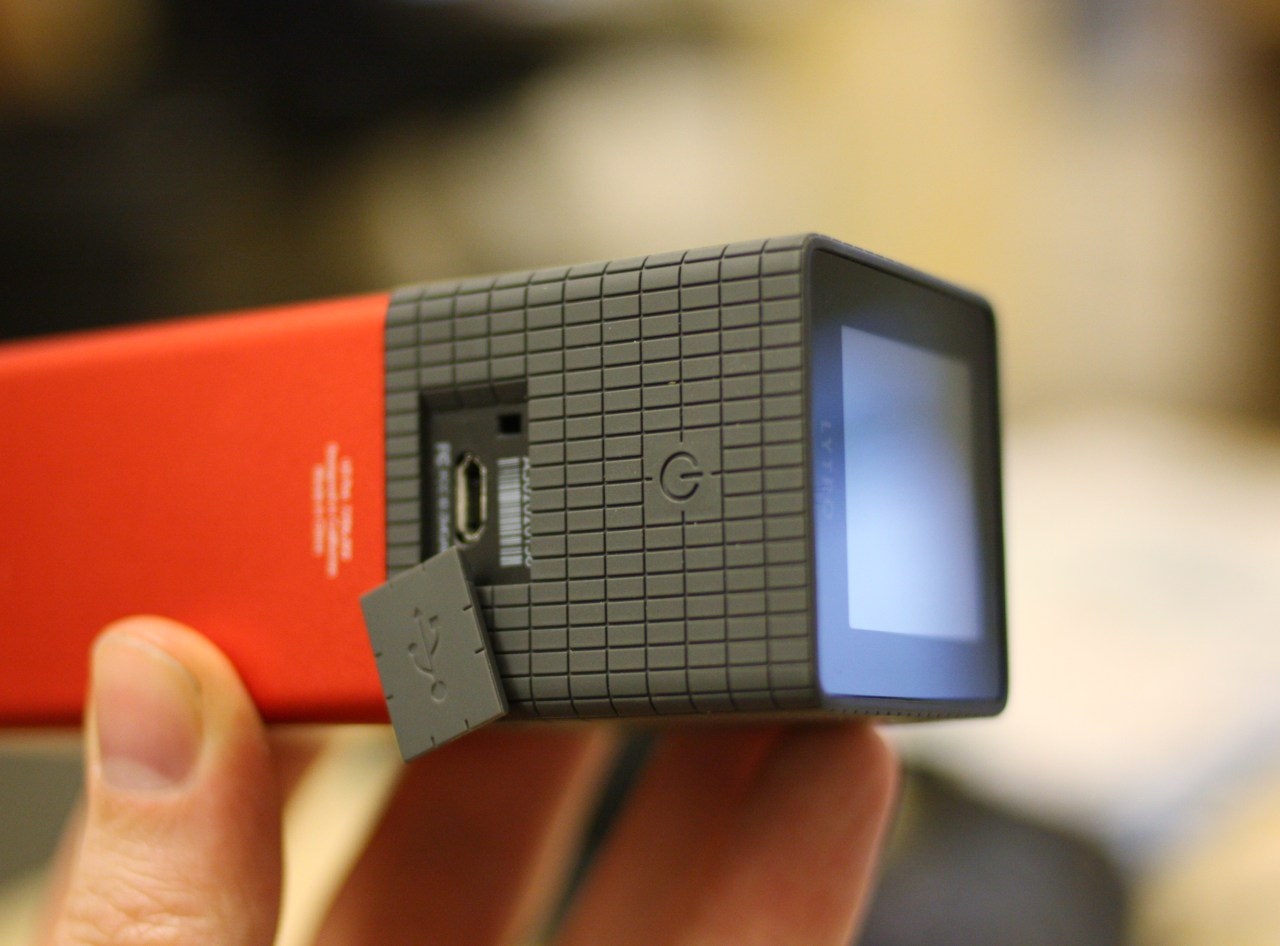 Shooting with the Lytro

Note: you can click on the pictures below to change the focus.

Creating multi-depth pictures is a totally new and interesting experience. The closest thing I can think of to how it feels is when I was using the Casio Exilim FC100 to shoot super-slow-motion video. Described on paper, both light field pictures and high framerates don’t really pique the imagination. But once you do it, you’re curious to find out how it would work in this or that situation, or from up here, or over here, and you begin to think differently about how the world around you can be captured.

The thing is that, as DP Review concisely puts it, this type of photography “tends to require contrived compositions.” Lytro’s primary strength is also its greatest weakness.

First it should be noted that the lens on the camera really isn’t very wide. They put it at ~36mm, but I found it had only a slightly wider field of view than my 1.6x crop DSLR with a 35mm lens – in other words, around 45mm, which is far from wide-angle. At all events, it could be wider. For composition with multiple subjects, which is really the only reason a picture should be taken with a Lytro camera and not a traditional one, you need as wide an angle as possible. A portrait lens means you’ll always be struggling to fit two subjects in the frame. And the square aspect ratio makes it harder still; you’d think you’d want a widescreen format so a foreground subject can be left or centered and the other subject off-center or opposed.

When shooting, you can be in either everyday or creative mode. In everyday mode, it is difficult to get the refocus effect without a specific kind of composition: very close to one object, with another distant object in the other part of the frame. In creative mode, you have much more latitude, and can do interesting things like shots with a long zoom (the constant f/2 lens helps with this) or super-macro stuff.

This last application, I have to say, is really astonishing — I was told that the device can essentially focus on things touching the lens, which is extraordinary and has produced some really interesting pictures almost effortlessly.

The catch with creative mode is that you can’t just fire away: you have to tap on the tiny screen to pick a region to “focus” on, and the resulting focus process is long and slow. You’ll want to use creative for action shots, but it’s impossible; you have to use everyday, and then you wish you’d just shot it with a normal camera.

As far as acting as a camera that simply requires no focusing, it certainly can do that, but the sharpness and image quality aren’t stellar, so you won’t want to print it big or anything like that. They’re experimenting with larger sensors and suggested that it may be possible to derive a larger static image from the raw light field data, but for now, the 1080×1080 image with questionable noise and sharpness levels is all you’re getting. Not that it’s really meant to be a replacement for a normal point and shoot camera, but one would hope it could at least fill that role.

The lack of tools to affect the photo after the fact is also frustrating. The Lytro software allows you to browse, rotate, and share, but that’s it right now. No adjustment of color or exposure, no expansion or contraction of the focus area, no cool effects that only a Lytro camera can do. This will change, but as it is, you’re very restricted in how you handle your images.

I do want to point out, though, that the simplicity of operation means that a child can use it, and it may actually be an interesting way for a young photographer to learn the rudiments of framing, depth of field, and so on. It’s hard to make a mistake in everyday mode, though the results probably won’t be breathtaking.

Despite the simplicity of the process, there’s still a learning curve to actually getting a photo right. As you can see, I was only partially successful. 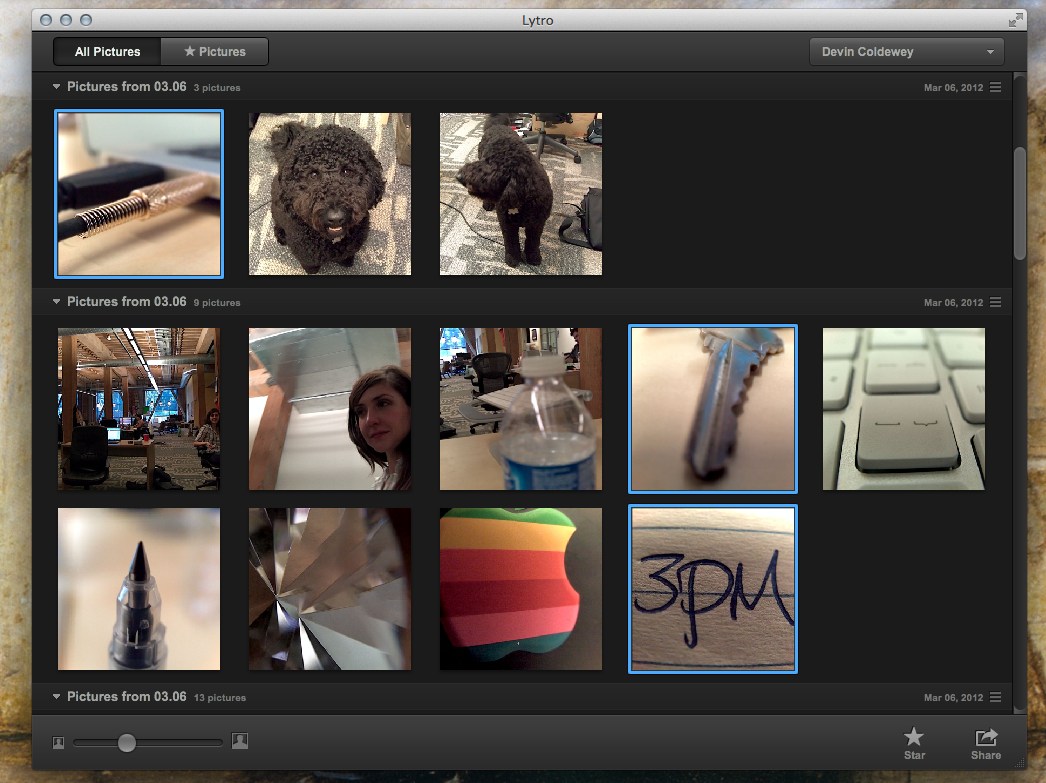 The Lytro software is limited to browsing your photos and grouping them into “stories,” and you can upload them directly to (and only to) Lytro, which will serve them for… eternity, you hope. Not much of a choice there.

Bafflingly, you can’t look at your photos in full resolution in the app; you’re limited to a half-size preview, fully interactive of course, but it’s only once you’ve uploaded them that you can see them in the full-size mode. A truly strange omission.

There is precious little information available about the picture for the interested shooter. You can’t see how many focal points will be preserved for the compressed web version, you can’t view a depth map or any metadata other than basic exposure info. Sharing online works fine, and interacting with the pictures is easy and can be fun.

I realize that this review may seem overly critical. That’s because I’m reviewing the product, not the technology. The technology is absolutely fascinating to me and some the potential applications (as verified with the device’s inventor, Ren Ng, and others) are mind-blowing. The problem is simply that none of the killer features are shipping with the camera. The primary usage scenario is limited to a certain type of framing and range, something a casual user will tire of quickly. And the extended usage scenarios forfeit the simplicity promised by the camera. 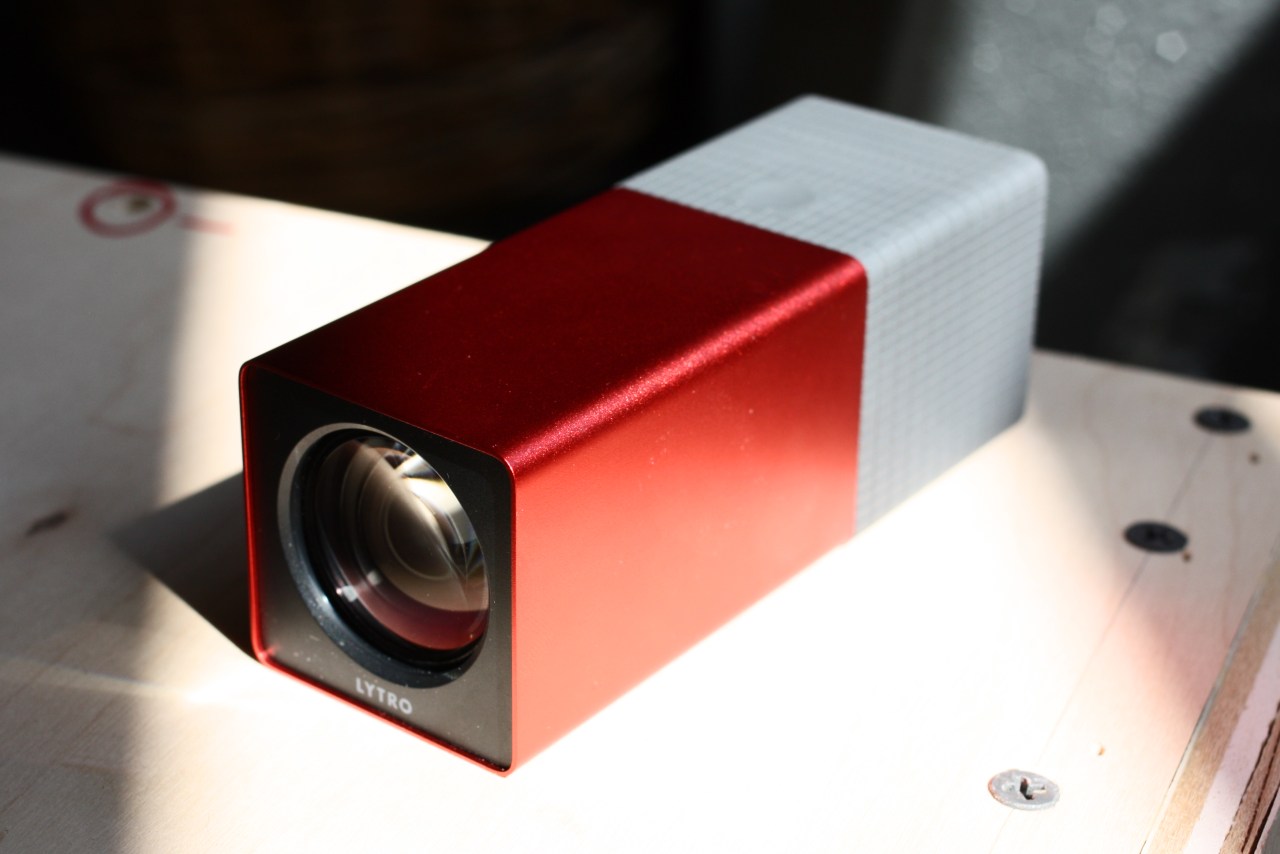 The stuff they have coming down the line over the rest of the year might make this camera a much more exciting proposition: control over depth of field, adjustment of color and exposure, a more versatile client app (and a Windows version), more ways to share your photos, 3D and perspective shifting… the list goes on.

But those features will be rolled out who knows when. Right now the camera is shipping, for $400, with a feature set that, aside from the initial blush of curiosity and experimentation, doesn’t really excite.

The fact is that the people who would be interested by the Lytro are already buying it in droves, with the faith that it will improve — and it will. But will a group of early adopters, even a fairly large one, give Lytro enough legitimacy to continue their improvements, maybe put out a new device? Right now the Lytro is kind of a hard sell. As a photographer, and as an evaluator of popular products, my doubts remain. The people at Lytro are extremely smart, the technology is truly fascinating, and the potential is off the charts. But as a debut, the Lytro camera is just too limited in its current form to recommend to anyone but an enthusiast with money to burn. A year from now it might be different.