Over the holidays, eBay and PayPal both pushed the term ‘couch commerce,’, in which consumers use their tablets and mobile phones from the comfort of their couches. In fact, eBay launched a new feature of its iPad app called Watch With eBay, which allowed users to shop a selection of items on the marketplace related to what they are currently watching on TV. Today, eBay is separating out the feature into a standalone, free iPad app.

The Watch With eBay app surfaces merchandise related to what consumers are watching on television, from the latest fashion trends at red carpet awards shows to sports memorabilia, to DVDs, signed autographs and other items related to favorite shows and actors.

As eBay says, a reported 86 percent of mobile Internet surfers use their smartphones and tablets as their “second screens” simultaneously while watching their favorite shows. While many consumers look to eBay with a specific intent for an item, eBay believes there is tremendous potential in engaging people when they are not necessarily on a shopping mission.

The app itself includes a program guide consumers can use to access content related to their favorite television shows in real-time with the ability to curate content by category. Users tap “Watch with eBay” and type in their zip code, cable provider, channel and the program they are currently watching; and using show and event-specific key word searches, the app will surface relevant merchandise from the more than 300 million listings available on the eBay marketplace.

Consumers can browse or choose to eliminate a keyword to pull up the most relevant listings. For example, a New York Yankees fan watching a Yankees vs. Red Sox game can filter out “Red Sox” and view listings only for the Yankees.

Another feature called eBay Celebrity gives users an inside look at featured celebrities’ favorite items, and eBay will curate shopping results related to the celebrity picks and provides the option to donate to a benefiting charity at check out. Some celebrities will interact with consumers through original content, video and message boards.

As eBay mobile VP Steve Yankovich tells us, “apps on TV don’t work. It’s about providing a second screen experience.” He feels the app’s ability to add product discovery to the TV watching experience will attract a lot of consumers. Already he says, Watch With eBay on the marketplace’s standalone app has become a popular feature among users. 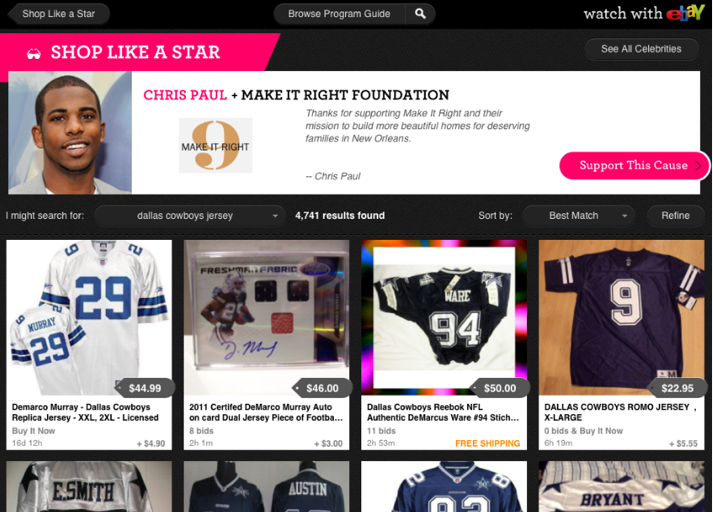 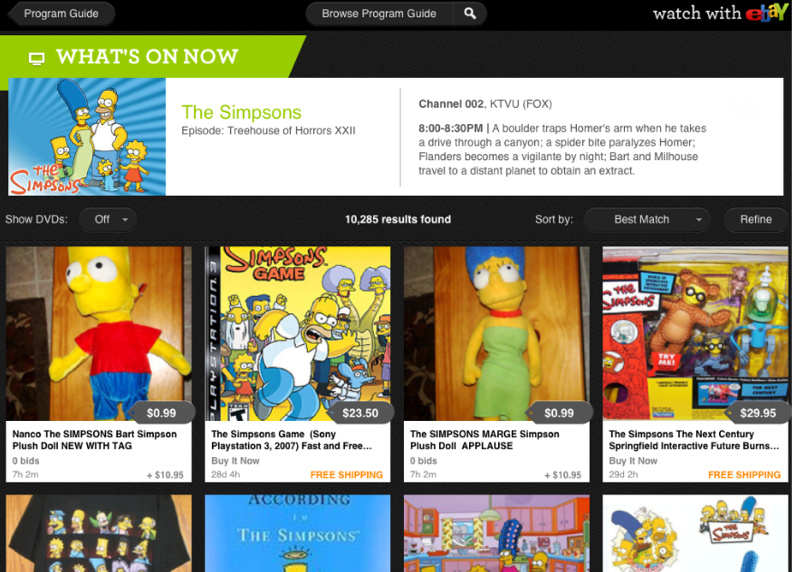